Certain types of nerve injury, such as those from automobile accidents and falls, can damage or sever the axons that connect neurons and allow them to communicate with each other. Although axons elsewhere in the body can regenerate to some extent after such damage, those in nerves are far less capable, resulting in long-lasting or permanent impairment.

Treating such injuries requires clarification of how certain nerves are induced to regenerate and which molecular pathways are involved. By studying nerve regeneration in roundworms, Nagoya University researchers have discovered another signaling pathway that induces nerves to regenerate. The team also showed that this pathway is the same as the one that leads to identification and subsequent clearance of dying cells. 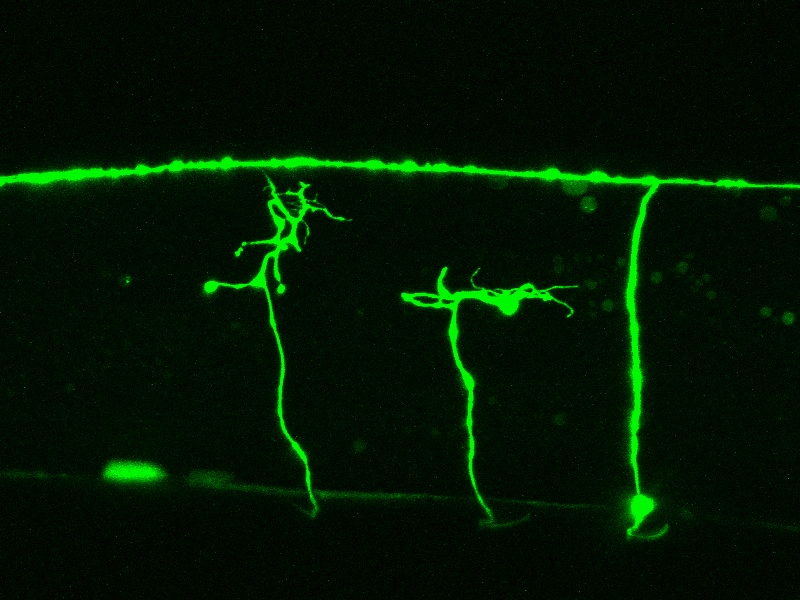 Neurons communicate with each other via electrical signals conveyed through dendrites and axons. This connectivity within the nerve is a source of the multiple functions of this organ, but damage to these connections due to trauma can cause functional impairment. Nerve regeneration after nerve injury is therefore an issue of special interest, but is difficult to study in humans. A non-parasitic, free-living roundworm nematode is a useful model for studying this issue as it avoids the ethical problems associated with human experimentation and its short generation time and simple development facilitate genetic engineering experiments.

To shed light on how damaged nerves are induced to regenerate, the researchers investigated various strains of this worm in which different genes were mutated or inactivated. They subjected the worms to a range of experiments, including labeling nerves with a fluorescent marker, cutting the nerves with a laser, and then monitoring their regrowth under a microscope.

They also examined the worms’ resistance with different genetic backgrounds to heavy metal stress, based on earlier findings that similar genes may be involved in both resistance to heavy metal exposure and nerve regeneration. When certain proteins encoded by these genes were absent or dysfunctional in the worms, their nerves were less able to regenerate, particularly during adulthood.

They were also less able to endure exposure to a toxic level of copper. By comparing these results among the strains in which single or multiple genes had been inactivated, the researchers established a complex molecular pathway that allows nerves to regenerate. They also found that the key molecular machinery involved in this is the same as that by which dying cells are recognized, engulfed by immune system cells, and disposed of.

“Many of the molecules and mechanisms we identified in worms have equivalents in humans,” corresponding author Naoki Hisamoto says. “Our findings should therefore lead us to targets in humans that we can use to improve recovery after nerve injury by promoting regrowth of damaged axons.”