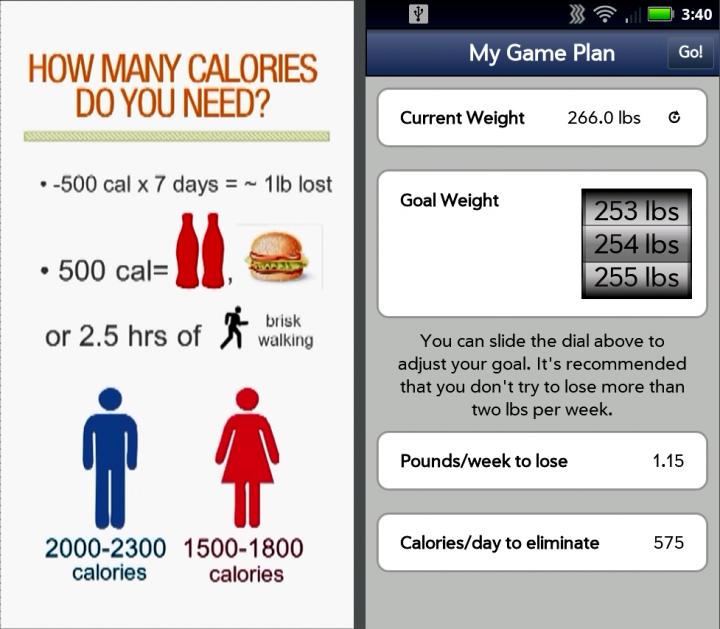 This a photograph of screens from the CITY weight loss app. (Credit: Duke Medicine)

Used alone, a cell phone app that tracks exercise, calories and weight loss goals is, on average, not enough to create meaningful weight loss in young adults, according to new research from Duke Medicine.

The study was published online Nov. 4 by the journal Obesity and offers a sober insight about the complexities of weight loss and potential limitations of an app-based approach. The inexpensive and easily accessed tool was aimed at tech-savvy adults ages 18 to 35.

“Thirty-five percent of this age-group is overweight or obese, and that’s a huge public health problem,” said Laura P. Svetkey, M.D., the study’s lead author and professor of medicine at the Duke University School of Medicine. “We thought that because this is an age group that is most engaged in technology, it might be possible to intervene and prevent future problems like cardiovascular disease, high blood pressure and diabetes while they are still developing their lifestyle habits.”

The randomized study included 365 people ages 18 to 35 who were overweight or obese. One group of participants used a free Android app called CITY (Cell Phone Intervention for You), which was designed exclusively for the study through a collaboration between Duke investigators and the mHealth research group at Northeastern University.

Like many commercially available cell phone apps, CITY could be used to track calorie intake, activity and weight loss goals, and also offered weight loss tips and opportunities to connect with other users for social support.

On average, participants who used the app lost about 2 pounds after two years — no more than participants in a control group that received paper handouts about exercise and nutrition.

“For some people it did work,” Svetkey said. “But on average, the difference with the control group was insignificant. This doesn’t mean cell phone apps can’t work for weight control, but this one didn’t.”

In a separate arm of the study, participants received personal coaching from a weight loss coach — a model of behavioral intervention that some studies have shown to be more effective but costly, Svetkey said.

Coaches met with participants weekly for six weeks, and then followed up with monthly phone meetings. Members of the coached group lost more weight on average than both the control group and the cell phone group — about 8 pounds after 12 months, compared to about 5 pounds in the control group. But after two years, there was no sign that either using a cell phone app or a personal coach was any more effective than getting a paper flier about weight loss at the doctor’s office.

Several study limitations could have led to these findings, the authors said.

All participants were permitted to download other commercially available weight loss apps such as MyFitnessPal during the two-year period. But there was no significant difference in weight loss between those who used the CITY app and those who added commercial apps, Svetkey said. It’s also possible the app wasn’t interactive enough, or the 18-to-35 set was the wrong target, she said.

“A lot of people can lose weight in a short amount of time,” Bennett said. “The real question is, can they keep it off in the long term. Research has really focused on older populations, and that’s a missed opportunity. We know that younger consumers are a population that we’re having an extraordinarily difficult time treating, and who need intervention now to offset health risks later on.”