“Rather than a fiery, passion-driven hunt for something clever, we realized a long time ago that the easiest route to good bioprinting wasn’t reinventing the wheel,” said one of the researchers, TJ Hinton, a Postdoctoral Fellow. 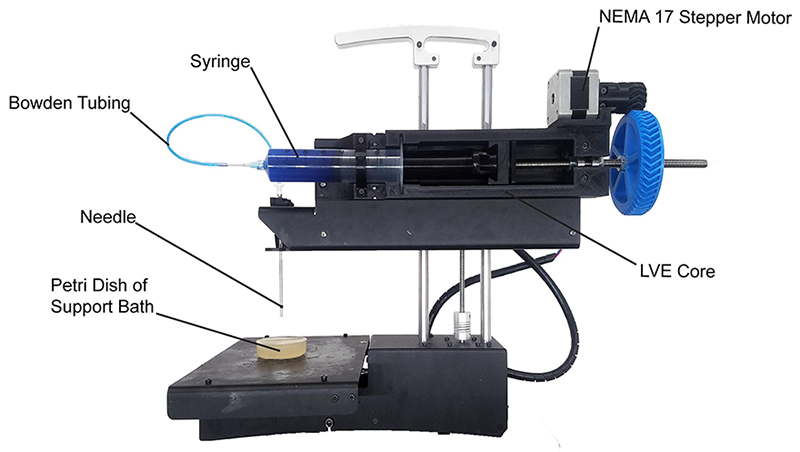 PrintrBot Simple Metal modified with the LVE for FRESH printing. The build plate of the printer holds a Petri dish of FRESH support bath into which the needle is lowered to perform printing. The Bowden tubing, comprised of polyurethane and acquired online from Grainger, separates the 60 mL disposable syringe (here containing Alcian-Blue-dyed alginate) from the needle, allowing the 3D printed LVE core to be mounted to the frame of the PrintrBot as shown. The LVE leadscrew is also driven by the stock NEMA 17 stepper motor that came with the PrintrBot. The stepper motor has simply been removed from the stock hot end assembly and screwed into the LVE assembly as shown; no other alterations to the motor are required for this set up. Credit: Carnegie Mellon University

Presently, most 3D bioprinters cost $10,000 to $20,000 and are closed-source. By contrast, the open-source printer developed by the Carnegie Melllon researchers gives engineers the ability to build their own 3D printer for less than $500.

The final product was a large, volume syringe pump extruder that worked with almost any open source, fused deposition modeling (FDM) printer. Feinberg, Pusch and Hinton decided to keep their breakthrough as open source to ensure anyone could build their own model and pursue research.

“If we were to protect our design, it would never have a chance to help anyone without us commercializing it,” said Hinton. “The design contributes more to the community we are all a part of.”

Additionally, the bioprinter was given the ability to start and stop extrusion on a dime. It was also given the capability to give users six times the volume of ink to use and print quickly with accuracy and retraction.

“We haven’t yet printed something that uses all 60 mL of its ink volume, but that may happen soon,” said Hinton. “What’s really awesome about this design is that it’s a super-rigid Bowden system; furthermore, on a machine like an Ultimaker or a Makerbot-style cartesian machine, we could see printing speeds four to five times higher than any other bioprinter, and we wouldn’t sacrifice accuracy or volume.”

Thus far, they have taken MRI images of coronary arteries and 3D images of embryonic hearts. They have printed these from materials such as collagens, alginates and fibrins, but the challenge with these soft materials is that they can potentially collapse under their own weight. In response, the researchers developed a method that printed the fragile materials inside a support bath material that would print one gel inside of another gel. This allowed them to position the material as each layer was printed.

The system uses alginate, a biomaterial for 3D printing, and the lab’s Freefom Reversible Embedding of Suspended Hydrogels (FRESH) technique. This technique allows the support gel to melt away by heating to body temperature, which does not damage the biological molecules or living cells. The group hopes to incorporate real heart cells into the 3D printed structures and create scaffold for contractile muscle.

The researchers are excited to inspire people to use this for prototyping at home, adopting 3D and CAD-based design tools and making objects.

“We hope anyone who wants to play with things like gels, rubbers, epoxies, and other fascinating materials can do the same exact prints as someone rapid prototyping on their desktop 3d printer, because, remember, all of these desktop printers are already capable of this modification,” said Hinton.

These researchers hope that their design and innovation prods the way for newfound information.

“We designed this machine to evolve with users, and we hope whatever isn’t yet optimized will quickly be found by adopters of the design,” said Hinton.