A group of researchers from various institutions in Germany has developed a new type of cochlear implant that is based on light, according to Medical Xpress. This new implant uses a concept that has been around for many years.

Originally, scientists came up with a way to partially restore hearing in people with cochlear damage with a cochlear implant. The implant works by converting sounds to electrical signals that are transmitted to neurons, which carry the signal to the brain. Although these implants have helped, people still suffer from trying to decipher multiple simultaneous sounds happening at once, which results in muffled noise.

Now, researchers have converted sound to light instead of electricity, since light can be precisely directed.

The new implant fires light directly at the cochlear neurons. Researchers tested this theory on gerbils to see if gerbils would respond to the device. First, the researchers trained gerbils to jump from one part of their cage to another when they heard a certain sound. Next, the team injected a virus carrying gene encoding for light sensitivity into the cochlea. Once the device was implanted, light from the implant was activated, which caused the gerbils to jump just as they originally had done before. This showed that the gerbils were still receiving the same signals.

Next, the team caused cochlear-based hearing loss in the test gerbils and started the implant once more. They reported that the gerbils had jumped just as they had done previously to the sound, proving their hearing had been restored.

The researchers believe their device is proof of concept to improve cochlear implants. The next step is to add electronics to the device to covert sound signals to light.

The video uses the concept of new optogenetic cochlear implants. The sound from the piano is picked up by a microphone and transmitted to a processor, which then translates the sound into optical patterns from the LEDs placed in the cochlea. 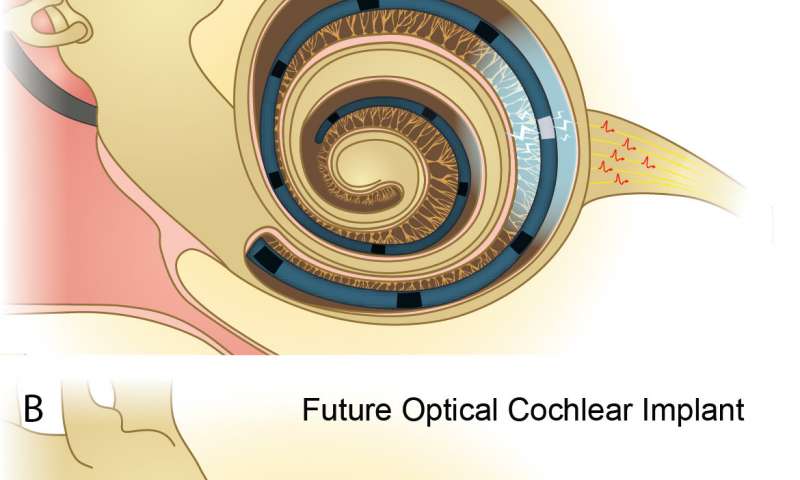 (A) electrical cochlear implants contain 12-24 electrodes which typically provide less than 10 independent frequency channels for users. This is due to the fact that current spread (light blue shade) leads to activation of a large population of neurons along the frequency axis of the cochlea and thereby limits the frequency resolution and dynamic range of electrical coding. (B) optical stimulation promises spatially confined activation of neurons in the auditory nerve allowing for a higher number of independent stimulation channels and, thereby, improving frequency and intensity resolution using future oCIs. (C) this preclinical animal study used single channel optical stimulation by inserting an optical fiber into the cochlea. Credit: University Medical Center Göttingen, Germany