Quantitative analysis of DNA purity and concentration is based on UV-Vis or absorption spectroscopy. Both DNA and protein absorb UV light, but have different absorption peaks at 260 nm and 280 nm respectively. The absorbances at these wavelengths determine the concentration of DNA and protein, while the ratio of the absorbances determines the purity of the DNA sample.

High Irradiance and Excellent Spectral Quality Drives Superior Performance
For UV-Vis spectrophotometers used in DNA analysis, performance means lower detection limits and linearity of measurement over a wide range of concentration. At both 260 nm and 280 nm, a 1 mW UVC LED delivers more than 10 times the irradiance of a 15 W xenon flash lamp (Figure 2). Since the intensity of UVC LEDs is higher, the detector integration times would be shorter, resulting in less noise and lower detection limits. 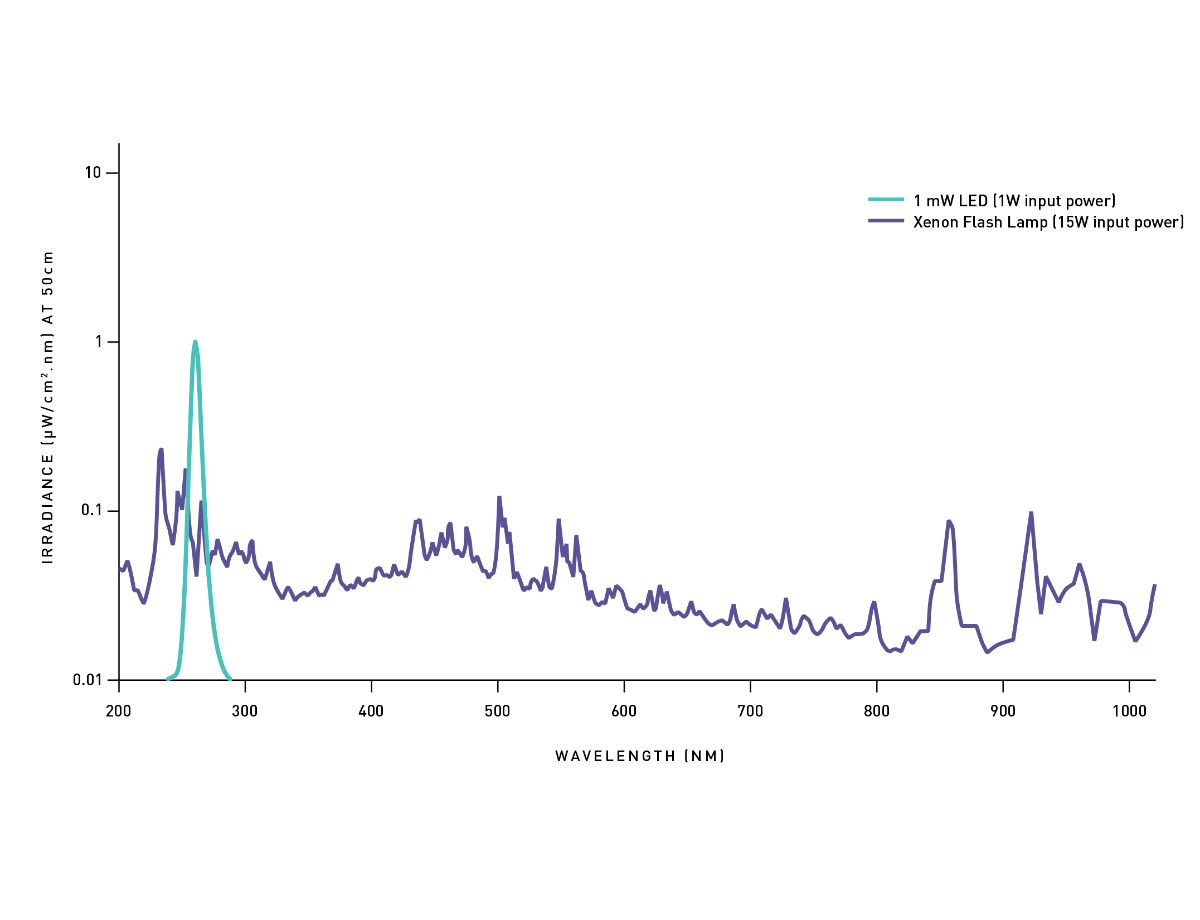 The high light output coupled with the excellent spectral quality of the LED leads to linearity of measurement over three orders of magnitude of concentration from 0.5 – 2000 ng/µl (Figure 3). This shows that UVC LEDs can deliver superior performance when compared to the traditional xenon flash lamp in these applications.

Figure 3: Absorbance measured with a 260 nm LED as a function of dsDNA concentration.]

LED Monochromaticity and Power Requirements Lowers Initial Cost
The narrow peak of the LED, unlike the broad spectrum of the xenon flash lamps, eliminates the need for filters to remove the unwanted wavelengths. In addition, an inexpensive silicon photodiode can be used for the detector as opposed to the expensive photodiode array (PDA) used in xenon flash lamp systems. Additionally, power sources for UVC LEDs are less complex, and less costly. This reduction in component costs enables manufacturers to reduce costs for DNA purity instruments by over 30% when compared to xenon flash lamp instruments.

Long Lifetime and Low Power Consumption Reduce Cost of Ownership
Efficiency of the system is also a factor that contributes to the overall costs. For an LED system with a 260 nm and a 280 nm LED, the power consumption is approximately 2 watts (1 watt per LED). A typical xenon flash lamp will operate at an average power of anywhere from 2-60 watts—making the UVC LED system more efficient for fixed wavelength measurements.

At a standard operating current of 20 mA, typically used in UV-Vis spectroscopy, Optan UVC LEDs have lifetimes that exceed lifetimes of UV lamps. Although the lifetime of a xenon flash lamp can be provided in hours, it is often represented in the number of flashes (or measurements) with a typical life of 1E9 flashes. For an on time of 1 millisecond per measurement, the typical lifetime of a UVC LED of 8,000 hours at 20 mA would translate to 3E10 measurements before requiring replacement. That’s 30 times more measurements than the xenon flash lamp (Figure 4). The longer life of the LED light source means that more measurements can be taken without the cost of replacement light sources and added maintenance costs.

UVC LEDs are better positioned to help instrument designers meet lab manager key requirements around performance and cost of ownership in UV-Vis spectrometers. The higher light output, longer lifetime and lower power consumption of these light sources is driving innovation in instrument design not only in the clinical lab but also in point-of-care diagnostics.