When Nathan Nguyen got pink eye from his sister using their at-home keyboard, he knew there had to be a way to prevent germs from spreading. Nguyen went to work and created an advanced 360-degree surface and air UV-C sterilizer called Raes launched by KickStarter.

“Sometimes you use the keyboard and things happen. You forget you touch your eyes or nose and it spreads,” Nguyen said. “You don’t think about it, but your phone, your keys and your wallet contain a lot of bacteria. You touch those things a lot.”

When Nguyen first thought of the idea he did research on ways to kill germs. His results led him to a lot of chemical jargon, but he was adamant on finding a safer way. He did not want to use chemicals around kids and have his bacteria become drug-resistant to antibiotics.

Instead, he looked further into using UV light, and confirmed his research when there was a breakthrough in LED. He wanted a product that did not expose people to UV light, while still disinfecting common, germ-infested items.

The hardest part for Nguyen was not the idea of using UV light, but the engineering behind the product. Nguyen did not know how to execute an enclosed mechanism to keep the UV light contained while it disinfected the object. Fortunately, Nguyen met William Harris, a U.S. Navy Veteran with experience in product development. From there, Harris knew he wanted to implement a belt mechanism to open and close the product.

“I approached William, pitched him the idea and he loved it,” Nguyen said.

Soon after, they had a sterilization device and an eye-skin protective shield that worked in seconds to destroy germs and sterilize objects.

After choosing KickStarter to launch his product, Nguyen finalized his target audience. Although experts recommended focusing on one area such as hospitals, Nguyen was more interested in ensuring the general public would have access to this resource.

He said that a lot of places like libraries do not provide resources to protect yourself with, while hundreds of people every day are touching those computers, chairs, books and more.

As the product launches, Nguyen is offering different packages and sizes of the product that can be found on KickStart for $85, $100 and $175 depending on the package.

He also created a Raes 360 on-the-go bag for people to take anywhere if they need to sterilize their phone in the car, a pair of shoes or their work clothes from the hospital.

An on-the-go bag for people to sterilize items wherever they are is also offered from Raes’ products.

Eventually, Nguyen hopes to take his product one step further, and be able to sterilize an entire room from door handles, to entry ways to chairs or desks. His hopes are to create an enclosure that can fit an entire room for hospitals, schools and more. Nguyen said there will be little limitation to what products can be sanitized once the existing Raes’ products take off.

“Eventually, each chair would have its own sterilization device and sterilizer,” Nguyen said. “So, people at the ER could actually protect the person next to them from catching something.”

Although, Nguyen hopes to have his product evolve into something bigger, right now, he’s confident his current product can better protect loved ones and those who are most vulnerable.

“My goal is to have this product in the world so people don’t have to die from a disease that is totally preventable. I have a solution,” Nguyen said. “It’s pretty bold, but I’m hoping to introduce this device to the world so we can apply this solution, protect the innocent and save lives.” 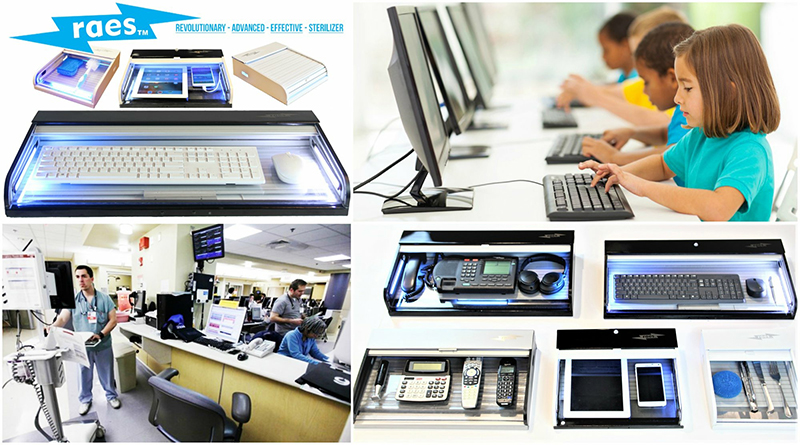