During minimally invasive surgeries, surgeons rely on long, thin, metal tools to explore their patients’ bodies.  Such laparoscopic surgeries benefit patients by reducing the size of surgical cuts and minimizing scarring, but surgeons can no longer use their fingers to directly touch patients to sense essential information about their organs. 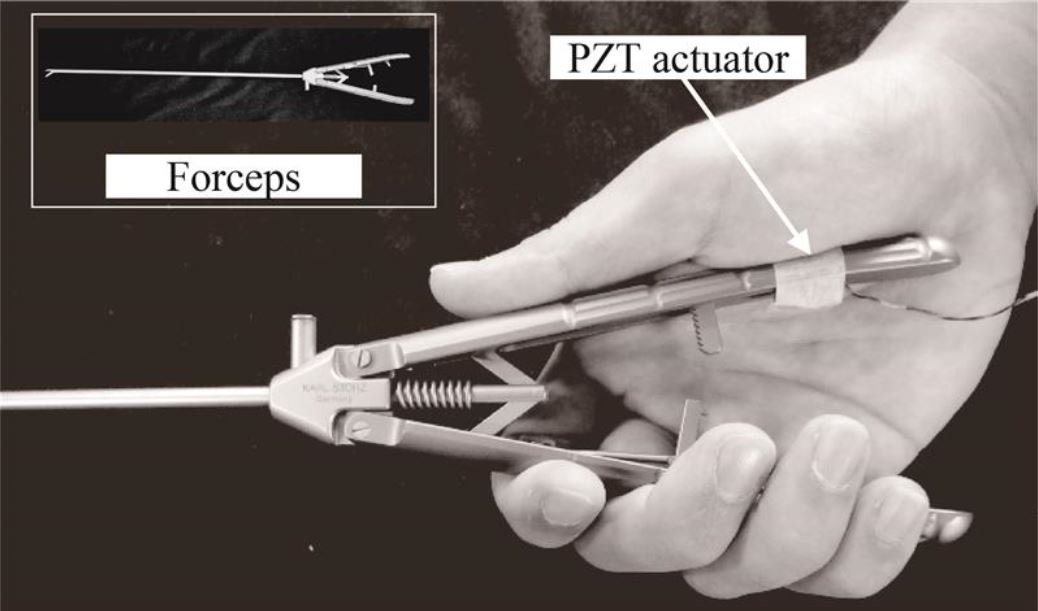 View of the PZT Actuator attached to standard surgical forceps using during laparoscopic surgery. The vibration device created by Hiroshima University researchers can be slipped onto any surgical tool and vibrate against the surgeon’s palm, improving the ability to sense the details of a patient’s internal tissues and organs. The PZT Actuator may improve patient outcomes by allowing surgeons to better understand their patients’ bodies during minimally invasive surgeries. Image by Yuichi Kurita, Hiroshima University.

“We started this work six years ago, trying to enhance human fingertip sensitivity, but in 2012 I had the idea that increased sensitivity could be valuable during minimally invasive surgeries.  Typical medical tools obtain information about the patient’s condition.  There are very few devices that aim to enhance the doctor’s skill,” said Yuichi Kurita, Ph.D., lead author of the study and Associate Professor at Hiroshima University.

Volunteers were blindfolded and asked to use surgical forceps with the PZT Actuator attached to the handle to identify different textures of sandpaper and find a small Styrofoam ball inside a cup filled with silicone.  These tests mimic detecting tissue texture and identifying a solid tumor.

The results of these tests and other analysis revealed that there is a range of vibration intensity that significantly improves anyone’s sensitivity.  The tool does not need to be fine-tuned to each user’s unique sense of touch, meaning the PZT Actuator should be robust and simple to use.

The PZT Actuator remains safe for patients because the device is only on the handles of the surgeon’s tools, not inside the patient’s body.  The vibrations are so subtle that they do not shake the tool.  The electrical power supply is also safe for doctors and patients.

“Our next set of experiments will confirm the usefulness of the PZT Actuator in surgical situations.  Before we can give this tool to surgeons, we must also develop a method to maintain good hygiene of the device so it is always safe for patients,” said Kurita.

The research team responsible for the PZT Actuator includes mathematical and medical engineers.  Researchers first tested the device through mathematical modeling using calculations of four types neurons and their response to different levels of mechanical stimulation.  The mathematical term describing the phenomena of a constant undetectable signal enhancing a simultaneous irregular signal is called the stochastic resonance effect.