MIT researchers at Little Devices Lab have developed modular blocks that can be used to produce diagnostic devices. Known as a “plug-and-play” device, the blocks that make up the device can be assembled with little expertise to test blood glucose levels in diabetic patients or identify viral infections.

“Our long-term motivation is to enable small, low-resources laboratories to generate their own libraries of plug-and-play diagnostics to treat their local patient populations independently,” said Anna Young, co-director of MIT’s Little Devices Lab, according to MIT News.

By using what they call Ampli blocks, the MIT researchers are hoping to create devices that can detect cancer, the Zika virus and other diseases. The blocks cost about 6 cents for four blocks, and require no refrigeration or special requirements. This makes them extremely attractive to developing countries.

“We see these construction kits as a way of lowering the barriers to making medical technology,” said Jose Gomez-Marquez, co-director of the Little Devices Lab.

The Little Devices Lab researchers realized they could potentially get diagnostics for diseases by mimicking portable diagnostic devices that use a chemical reaction to determine results on paper strips, such as home pregnancy tests.

They created a kit of modular components that can be assembled together to generate results based on what the user needs. Their hope was that this method could get diagnostics into the hands of more people.

Today, they have created 40 different building blocks that lab employees can assemble on their own.

The components include a sheet of paper or glass fiber that is pressed between a plastic or metal block and glass cover. The blocks can snap together at any edge, and some contain channels for samples to flow through, while others have turns and can receive a sample from a pipette. 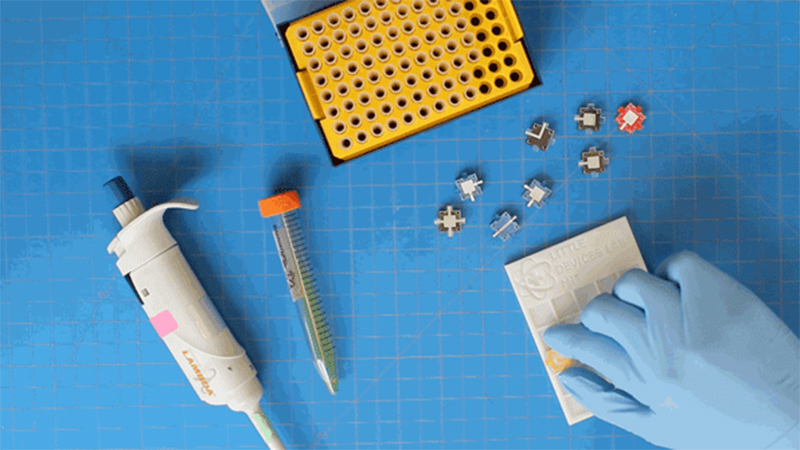 The blocks have different biochemical functions. Some have antibodies that can detect a molecule in a blood or urine sample, which are then attached to nanoparticles that change color if the target molecule is present. This would indicate a positive test result.

One test the researchers executed was testing if a tuberculosis patient was taking their medicine by detecting for isonicotinic acid. In some ways, the researchers demonstrated that the blocks can outperform other versions of paper diagnostic devices. They found that individuals could run a sample over again on the test strip multiple times, improving the signal. This has potential to detect more reliable results from blood, urine and saliva samples.

Right now, the team is working on tests for the human papilloma virus, malaria and Lyme disease. Their goal is to get their technology into the hands of labs of developing countries.

“By reducing the barriers to designing new point-of-care paper fluidics, the work invites nonexperts in and will certainly result in new ideas and collaborations in settings all around the world,” says Catherine Klapperich, associate professor of biomedical engineering at Boston University. “The practical demonstrations of the system presented here are poised to be immediately useful, while the possibilities for others to build on the tool are large.”