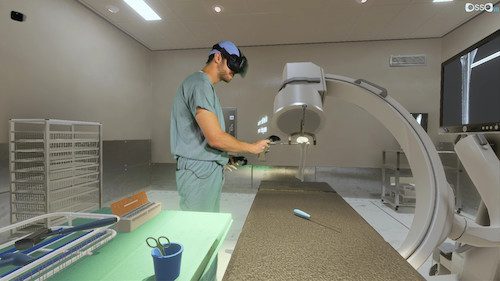 Dr. Justin Barad is a gamer, so it makes sense he would be drawn to virtual reality.

As a high schooler, Barad started the computer science team. He interned at Activision, and was all set to be a game developer. But then Barad started to think about how he could help people. He ended up in biomedical engineering, working at a medical device startup, and then attending medical school. Gaining experience during his residency helped him decipher a problem in surgical training, as well as a possible solution.

The trouble with surgical training

“What I noticed throughout my training was that the actual surgical techniques, specifically regarding medical devices, were really the responsibility of the medical device company,” Barad said. Training in these procedures took the form of dinners or infrequent courses. “But in a typical day I didn’t really have enough time to eat lunch and see my wife, let alone find time to make it to these courses,” he said. And this reality is true for many attending physicians.

Even with the time to attend training, Barad noted that the space between attending a course and first in-patient use can be anywhere from 4 to 6 months. And there is very little opportunity to practice in between, perhaps a video to review.

“Imagine studying for a test once and then taking that test 6 months later,” he said. “It just seems crazy.”

Barad admits that given such constraints, surgeons who want to use a new medical device might “wing it” a little bit. They might have someone read the technical guide aloud during a procedure, or a rep to walk them through a case. “It seemed pretty unstructured.”

Virtual reality technology came out during Barad’s residency, and he said he immediately recognized it as a possible opportunity to solve the training problem. It would eliminate travel (or at least limit it) and allow surgeons to train and practice on a device as between courses. Surgeons could safely learn how to use a new technology and bring it to appropriate patients quickly and effectively.

Barad built a prototype using off-the-shelf technology and partnered with Matt Newport, who had spent 15 years making games. The team started Osso VR at the end of 2016.

Osso VR creates training modules on behalf of medical device companies. They can load CAD files into the VR platform to ensure they dimensions of the device are exact, and then design the software of the training. The team then taps into a base of practicing clinicians to create an accurate simulation experience.

“You can drill into a leg, you have live x-ray, and you are doing everything yourself. You have controllers in your hand, and you’re picking up objects, you’re screwing them into each other. It’s very intuitive.”

Barad envisions the module is suited for older surgeons who want to use new technology, such as navigated knee or robotic-assisted knee. He also considers it vital for those who have finished their fellowships and are deciding on and developing the skills that will determine their careers. “They can really practice and decide what works best for them and their patients.”

In addition to surgical training, Barad sees the virtual reality technology as an opportunity for companies to collect usability data and train surgeons for clinical trials. Designers can track users’ replays and scores, which can identify ergonomic issues that might come up during the procedure.

Osso VR was recently named a finalist for the U.S. Department of Education’s EdSim Challenge. Osso VR’s investors include an interventional cardiologist, and Barad hopes to move from orthopedics to cardio and other surgical procedures.

His immediate goals are to ensure the VR is as realistic as possible, and validate the clinical data. His team has a UCLA study and others to be completed by the end of the year.