By combining data on optometry patient’s eyes with advanced computational methods, Indiana University researchers have created a virtual tissue model of diabetes in the eye.

The results, reported in the journal PLOS Computational Biology, show precisely how a small protein that can both damage or grow blood vessels in the eye causes vision loss and blindness in people with diabetes. The study could also lead to better treatment for diabetic retinopathy, which currently requires multiple, invasive procedures that aren’t always effective in the long term.

A common cause of vision loss in people with diabetes, diabetic retinopathy is responsible for 1 percent of all blindness worldwide and a leading cause of blindness in American adults.

“With the current epidemic of diabetes in adults, the number of people with vision damage from diabetes will continue to rise,” said Thomas Gast, an ophthalmologist and senior scientist at the IU School of Optometry, who was a lead author on the study. “This paper establishes a step-by-step pathway from a diabetic’s elevated blood sugars to the vascular complications in the eye. Therapeutically, understanding a disease can lead to improved treatments.”

A major way diabetic retinopathy threatens vision is diabetic edema. In this condition, the smallest vessels supplying the retina with oxygen become leaky, causing fluid to swell the central retinal area and impairing the type of vision required for precise activities such as reading.

This happens because the loss of blood flow in a vessel causes the local oxygen level to drop, which stimulates local production of vascular endothelial growth factor, or VEGF, a protein which in most tissues causes the growth of new blood vessels to repair damage. However, in a retina with elevated sugar levels, instead of repairing the damage, physicians observe a cascade of damage that propagates from the initial blocked vessel. The rate and area of the damage’s progression also vary greatly between patients in a seemingly unpredictable way. 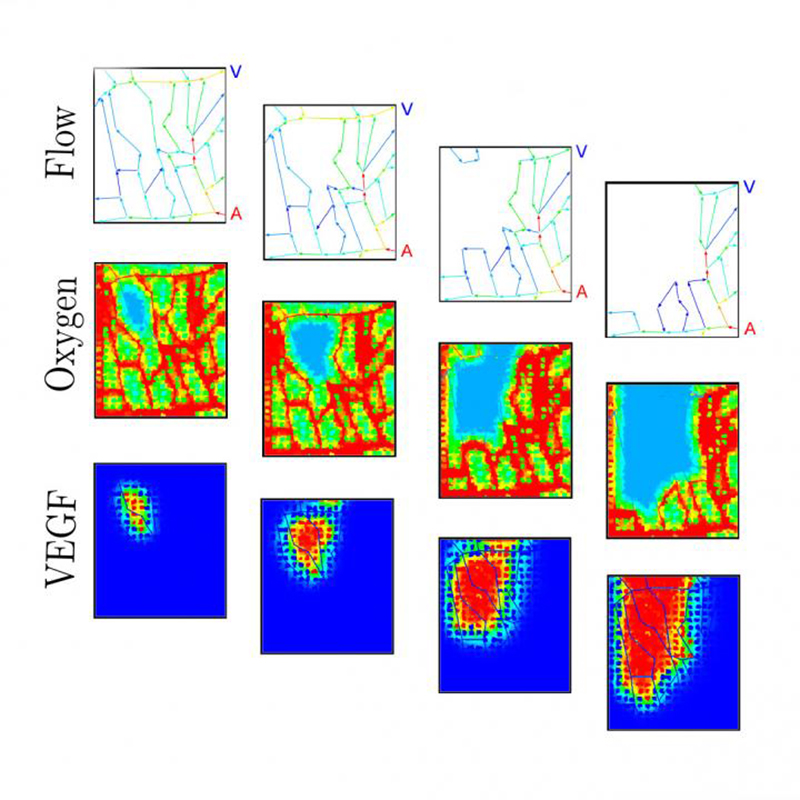 The virtual retina model in the IU study provides the first strong evidence for why this pattern of disease progression is so variable, and predicts where damage will occur next. It shows that the blockage of one vessel causes a local loss of oxygen in the retina, which triggers release of VEGF that spreads over a larger region, which, in turn increases the probability of blockage in the surrounding vessels, creating a “domino effect.”

The spread of damage from region to region depends on the detailed pattern of blood vessels in each patient and the amount of blood they carry, both of which vary greatly from person to person. Based on a patient’s specific vascular structure, the IU scientists’ new model calculates how much a blockage in one blood vessel will increase the probability of blockage in each neighboring vessel. As a result, their program predicts the specific rate and pattern of this cascading vascular damage in the individual.

Current treatment to stop this spread, called laser photocoagulation, places an approximately 1 millimeter square grid of burns uniformly across the back of the retina outside the area of good vision. These burns destroy areas of retina that consume oxygen, allowing extra oxygen to move into the retina from deeper vessels behind the retina. They also create blind spots, and many patients require multiple treatments that can impair their side and night vision.

“Our analysis suggests treatment of the retina with a large number of very small laser burns could prevent this ‘domino-like’ progressive loss of small retinal blood vessels and prevent elevation of VEGF and the major complications of diabetic retinopathy,” Dr. Gast said.

This individualized therapy would strategically place “firebreaks” of much smaller burns around areas from which the model predicts that vascular damage will spread in that patient, greatly reducing the total amount of damage and reducing the probability that damage will spread between the burns and propagate despite treatment. The IU team is now planning studies in animals and, ultimately, will look to others to partner on clinical trials that implement the new treatment in humans.

They also point out that the same mechanism found to cause damage to blood vessels in the eye may cause diabetic damage to the kidneys and nerves.

“Our goal is not only to deliver answers about one disease or biological process, but to provide a tool that allows researchers to answer many types of questions,” said James Glazier, director of the IU Biocomplexity Institute, who is also an author on the paper as well as another recent paper that computationally described the mechanisms underlying polycystic kidney disease. “No effort anywhere else attempts to provide a general solution for deploying virtual tissues across a whole range of significant biomedical questions.”