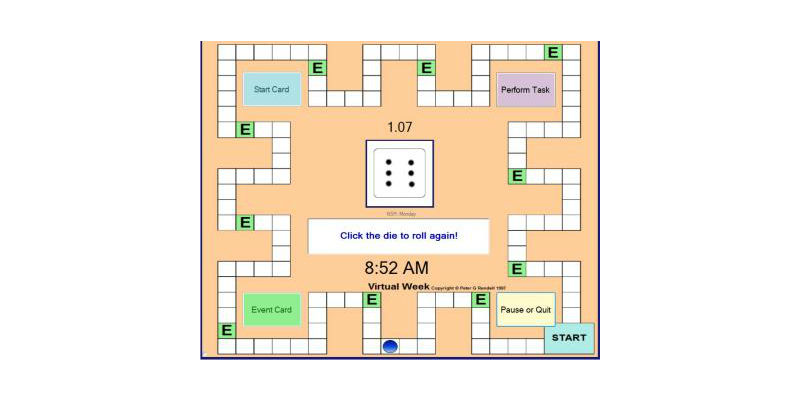 An international team of scientists has demonstrated that just one month of training on a “Virtual Week” computer brain game helps older adults significantly strengthen prospective memory – a type of memory that is crucial for planning, everyday functioning and independent living.

Seniors who played the cognitive-training game “more than doubled” the number of prospective memory tasks performed correctly compared to control groups that performed other activities such as music classes.

The promising results are reported by the Rotman Research Institute at Baycrest Health Sciences which led the study, and posted online today in Frontiers in Human Neuroscience, ahead of print publication.

Prospective memory refers to the ability to remember and successfully carry out intentions and planned activities during the day; it also tends to weaken with age. Prospective memory accounts for between 50 – 80% of reported everyday memory problems, yet few studies have attempted to train or rehabilitate prospective memory in older adults.

What makes this study unique is that it’s the first to incorporate a “train for transfer” approach – essentially a training intervention designed to have participants practice performing real-world prospective memory tasks in simulated everyday settings and assess whether the cognitive gains transfer to successful performance at home.

“As the world’s population ages, it is becoming increasingly important to develop ways to support successful prospective memory functioning so that older adults can continue to live independently at home without the need for assisted care,” said Nathan Rose, lead investigator of the study and now a research fellow in the School of Psychology at the Australian Catholic University in Melbourne. Senior author on the paper is Dr. Fergus Craik, an internationally-known memory researcher based at Baycrest.

“While these results are encouraging, they represent a first step in exploring the efficacy of prospective memory training with the Virtual Week training program,” said Dr. Craik. “Perhaps the most exciting aspect is that training in the lab resulted in improvements in real-life memory tasks. This lab-to-life transfer has been difficult to achieve in previous studies.”

In the study, scientists developed a version of a computerized board game called “Virtual Week” in which players simulate going through the course of a day on a circuit that resembles a Monopoly board. Players roll a virtual die (one of a pair of dice) to move their token through a virtual day. Along the way, players have to remember to perform several prospective memory tasks, such as taking medication or taking their dinner out of the oven at appropriate times.

Fifty-nine healthy adults, aged 60 to 79, took the training, playing 24 levels of the Virtual Week game over a one-month period (three sessions a week, two levels per session). The difficulty of the game increased over the course of training in terms of the number of tasks to be completed per day, the complexity of tasks, and/or interference with prior tasks. The difficulty was titrated to each individual’s level of performance on the previous day. Pre and post training prospective memory performance measures were taken and compared to two control groups – one of which received a music-based cognitive training program and the other which received no intervention.

The scientists found large training gains in prospective memory performance in the group that played the Virtual Week game (relative to control groups). Moreover, these gains transferred to significant improvements in real-world prospective memory, including performance on simulated activities of daily living following the training. These activities included counting change and following medication instructions. The researchers also developed a “call-back” task in which participants had to remember to phone the lab from home during their everyday activities.

Brain imaging (EEG) on a subset of the groups showed some evidence of neuroplasticity (i.e., brain changes) which correlated to correct prospective memory performance, particularly with the ability to stop oneself from carrying on with ongoing activities and switch to performing an intended action at the appropriate time.

The early findings are so promising that the researchers have been awarded a grant from the Australian Research Council, in partnership with Villa Maria Catholic Homes, to follow up on the study with a large randomized control trial. The research team was also awarded a grant with colleagues in the Centre for Heart and Mind at the Australian Catholic University’s Mary MacKillop Institute for Health Research to implement the game-based cognitive training program in patients with chronic heart failure, a group that demonstrates severe prospective memory problems associated with self-care.