Harvard researchers have identified a whole new class of high-performing organic molecules, inspired by vitamin B2, that can safely store electricity from intermittent energy sources like solar and wind power in large batteries.

The development builds on previous work in which the team developed a high-capacity flow battery that stored energy in organic molecules called quinones and a food additive called ferrocyanide. That advance was a game-changer, delivering the first high-performance, non-flammable, non-toxic, non-corrosive, and low-cost chemicals that could enable large-scale, inexpensive electricity storage.

While the versatile quinones show great promise for flow batteries, Harvard researchers continued to explore other organic molecules in pursuit of even better performance. But finding that same versatility in other organic systems has been challenging.

“Now, after considering about a million different quinones, we have developed a new class of battery electrolyte material that expands the possibilities of what we can do,” said Kaixiang Lin, a Ph.D. student at Harvard and first author of the paper. “Its simple synthesis means it should be manufacturable on a large scale at a very low cost, which is an important goal of this project.” 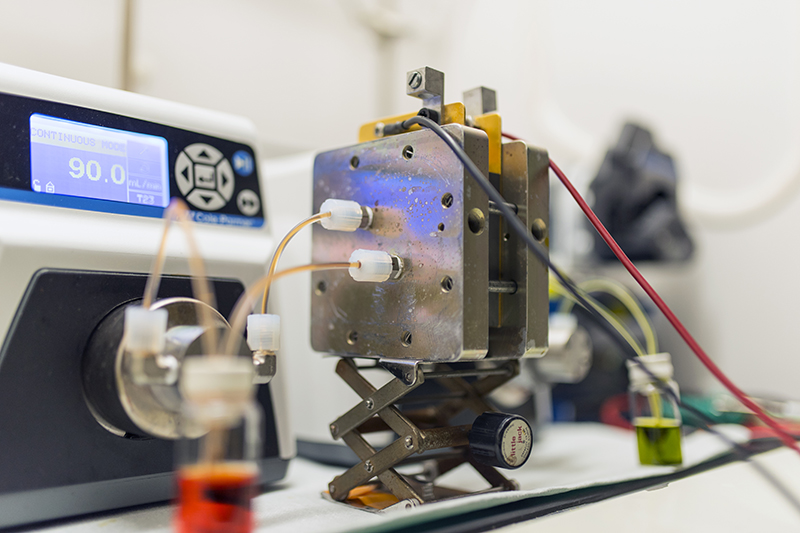 Flow batteries store energy in solutions in external tanks — the bigger the tanks, the more energy they store. In 2014, Michael J. Aziz, the Gene and Tracy Sykes Professor of Materials and Energy Technologies at the Harvard John A. Paulson School of Engineering and Applied Sciences (SEAS), Roy Gordon, the Thomas Dudley Cabot Professor of Chemistry and Professor of Materials Science, Alán Aspuru-Guzik, Professor of Chemistry and their team at Harvard replaced metal ions used as conventional battery electrolyte materials in acidic electrolytes with quinones, molecules that store energy in plants and animals. In 2015, they developed a quinone that could work in alkaline solutions alongside a common food additive.

In this most recent research, the team found inspiration in vitamin B2, which helps to store energy from food in the body. The key difference between B2 and quinones is that nitrogen atoms, instead of oxygen atoms, are involved in picking up and giving off electrons.

“With only a couple of tweaks to the original B2 molecule, this new group of molecules becomes a good candidate for alkaline flow batteries,” Aziz said.

“They have high stability and solubility and provide high battery voltage and storage capacity. Because vitamins are remarkably easy to make, this molecule could be manufactured on a large scale at a very low cost.”

The team will continue to explore quinones, as well as this new universe of molecules, in pursuit of a high-performing, long-lasting and inexpensive flow battery.