Warm-air blowers that keep patients at a safe temperature also interfere with operating room ventilation systems, potentially making it easier for microbial skin colonizers to cause infection at surgical sites.

The findings by collaborators at Oregon State University and the University of California, Irvine, shed new light on the most common type of HCA — healthcare-associated infection.

According to the Centers for Disease Control, about 30 percent of all HCAs among hospitalized patients are surgical site infections, or SSIs.

About two patients in 100 will develop an SSI, with a mortality rate of 3 percent.

When those numbers are multiplied by the millions of surgeries conducted each year in U.S. hospitals alone, the result is wide-scale human suffering and economic loss.

Corresponding author Sourabh Apte and other engineering researchers at OSU and UC Irvine conducted high-fidelity simulations of how thermal plumes from a warming blower interact with the ventilation system tasked with minimizing the amount of airborne bacteria in an operating room.

Apte, a mechanical engineering professor in the College of Engineering, and his team specifically looked at the dispersion of squames that each person sloughs off at the rate of about 10 million per day. Squames are tiny, disc-shaped flakes of skin, about 4 to 20 microns in diameter and 3 to 5 microns in thickness and with the density of water.

“In an operating room, everyone is wearing gloves, masks and hats, but they’re still shedding skin cells,” Apte says.

The squames are problematic because of microbial skin colonizers such as Staphylococcus aureus; when squames and the bacteria that live on them get into surgical sites, infection can be the result. 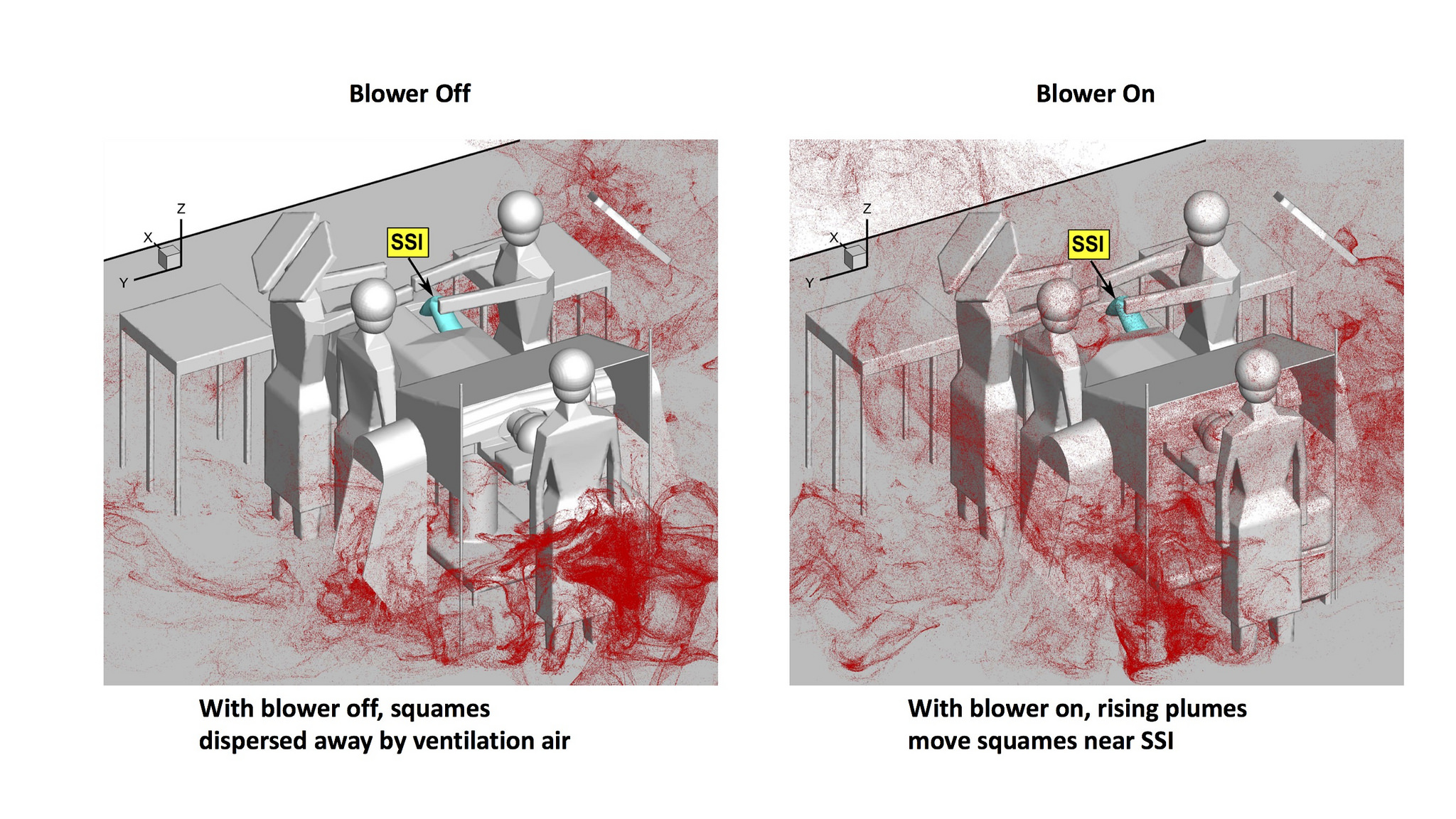 “An ultra-clean ventilation system constantly delivers highly filtered air with a uniform downward velocity, and its performance depends on volumetric air flow and proper temperature gradients,” Apte says. “Medical equipment in the OR, and the surgical staff, can disrupt the air flow in ways that increase the amount of bacterial colony-forming units, and so do the rising plumes of hot air from forced-air warming devices that prevent patient hypothermia.”

Researchers performed a high-fidelity, large-eddy simulation to predict the flow field in an operating room in which a patient was undergoing knee surgery. The simulation tracked 3 million squames and assumed a best-case, and very unlikely, scenario of all of the squames starting out on the floor.

“This numerical approach is fully three-dimensional and time-dependent and accounts for the effects of turbulence and heat transfer on the dispersion of squames,” Apte says. “The approach is fully predictive and captures the turbulent flow accurately without requiring any tunable parameters. This is the first study of its kind where large-eddy simulation was used to investigate dispersion of squame particles in an operating room.”

The results, published in the International Journal for Numerical Methods in Biomedical Engineering, show that with the blower off, the ventilation system quickly moves the squames toward exit grilles.

“But with the hot-air blower on, rising thermal plumes drag the squames above the operating table and side tables, where they’re advected downward toward the surgical site by the ventilation air entering from the ceiling,” Apte says. “We modeled the actual trajectory of each of 3 million squames.”

All of the calculations were performed on a parallel computer and used 1,600 processors. The overall calculation required more than 2 million central processing unit hours. Calculating the flow field with the hot-air blower and the trajectory of 3 million squames for about 25 seconds of physical time required about 200 hours of dedicated parallel computing.

Such predictive simulations of flow in a real operating room were feasible because of the unique computational capabilities developed by the researchers at OSU.

“The numerical approach lacks any limitations from a theoretical point of view, but there is a lack of detailed experimental measurements of the 3D velocity ﬁeld in an operating room during a clinical trial,” Apte says. “Such data would help validate the numerical predictions. According to experts in ﬂuid ﬂow measurements, gathering such detailed data during a clinical trial is potentially feasible but may cost up to $2 million.”