“We need you. We are going deep. Deep into space. Inner space.”

That’s how MyndGazer, an NYC-based startup currently undergoing a funding round on Kickstarter claiming to have the “world’s first neurofeedback in virtual reality” begins its campaign.

To try and grasp how MyndGazer’s technology works, imagine the visualization software that typically accompanies music on Windows Media Player or iTunes. The rhythms of a favorite song sync with wavy, often psychedelic visual representations, giving the user a unique synesthesia-like musical experience.

Got it? Well MyndGazer wants to do that with your brainwaves, man.

With the help of a virtual reality and an EEG headset, users are treated to a 3D show of their brainwaves in real-time. In its Kickstarter campaign MyndGazer features an Oculus rift, but the WebVR technology is supported by many VR headsets, including the Oculus Rift, HTC Vive, Google Cardboard, and according to MyndGazer, “most other headsets.”

As for the EEG, it was tested with the Mindwave Mobile EEG, and some development has been made with the Muse headset. MyndGazer hopes to also become compatible with EEG headsets by Emotiv, OpenBCI, and other manufacturers as they become available. And if you don’t own a VR headset, fear not: MyndGazer also works with a regular computer monitor or TV.

The goal here is relaxation, as MyndGazer’s mission seems to be a visual aid for focus and meditation. Should your thoughts be chaotic, that will be visually represented as what I can only imagine is a terrifying barrage of colors and shapes. As attention is focused, users can see how their brainwaves are manipulated into soothing, calming shapes. 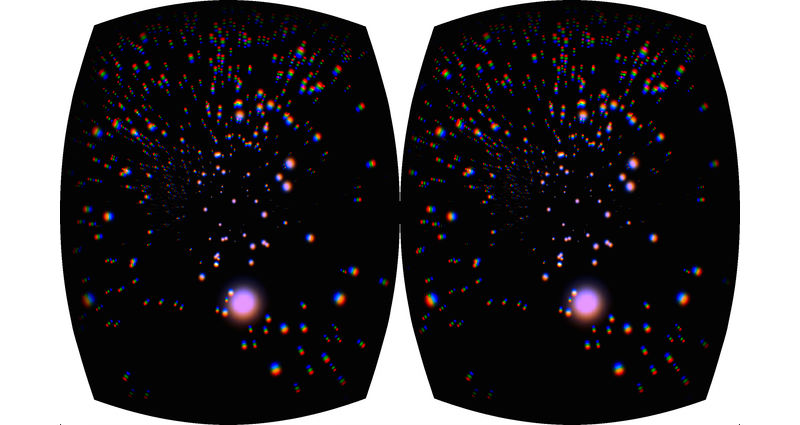 MyndGazer as it would appear on an Oculus Rift VR headset (Credit: MyndGazer)

If MyndGazer is true to description, it could be an excellent therapeutic tool for people who struggle with anxiety or attention-related disorders. Hopefully, manipulating the colors and shapes into something more organized can help users learn to calm their thoughts when necessary.

Though, I could see how seeing the representation of their anxious mind might actually make the wearer more anxious, depending on the intensity of the brainwave rendering.

I for one would be interested in seeing the story of how my brainwaves change throughout the day. (I’m picturing relatively tame visuals until my first cup of coffee, an organized clutter of images throughout the workday, and total blackness once the workday is over and I’ve given up on thinking at all.)