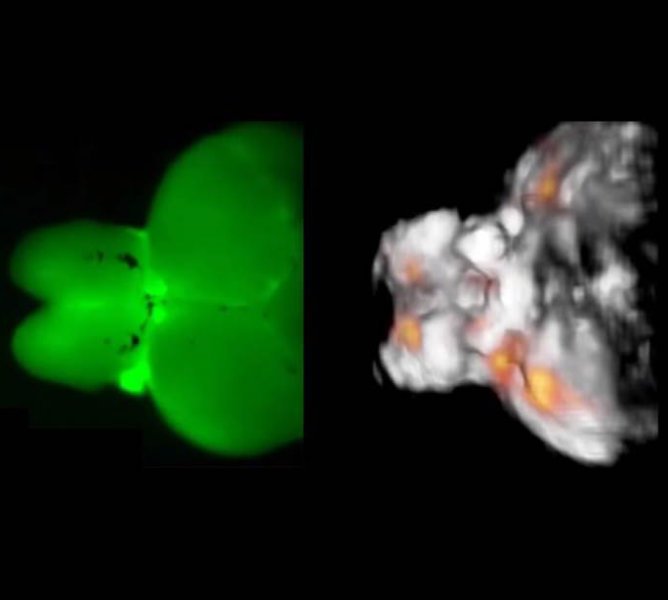 The figure shows typical images acquired from a highly scattering structure of an adult zebrafish brain. The fluorescence image on the left has a very blurry appearance indicating that the intense light scattering in large brains makes them inaccessible by optical microscopy methods. In contrast, functional optoacoustic tomography (image on the right) is able to provide high-resolution three-dimensional information regarding real-time neuronal activity (orange dots) in the entire scattering brain. (Credit: Helmholtz Zentrum München)

Watching millions of neurons in the brain interacting with each other is the ultimate dream of neuroscientists! A new imaging method now makes it possible to observe the activation of large neural circuits, currently up to the size of a small-animal brain, in real time and three dimensions. Researchers at the Helmholtz Zentrum München and the Technical University of Munich have recently reported on their new findings in Nature’s journal Light: Science & Applications.

Nowadays it is well recognized that most brain functions may not be comprehended through inspection of single neurons. To advance meaningfully, neuroscientists need the ability to monitor the activity of millions of neurons, both individually and collectively. However, such observations were so far not possible due to the limited penetration depth of optical microscopy techniques into a living brain.

A team headed by Prof. Dr. Daniel Razansky, a group leader at the Institute of Biological and Molecular Imaging (IBMI), Helmholtz Zentrum München, and Professor of Molecular Imaging Engineering at the Technical University of Munich, has now found a way to address this challenge. The new method is based on the so-called optoacoustics, which allows non-invasive interrogation of living tissues at centimeter scale depths.

“We discovered that optoacoustics can be made sensitive to the differences in calcium ion concentrations resulting from neural activity and devised a rapid functional optoacoustic neuro-tomography (FONT) system that can simultaneously record signals from a very large number of neurons,” said Dr. Xosé Luis Deán-Ben, first author of the study. Experiments performed by the scientists in brains of adult zebrafish (Danio rerio) expressing genetically encoded calcium indicator GCaMP5G demonstrated, for the first time, the fundamental ability to directly track neural dynamics using optoacoustics while overcoming the longstanding penetration barrier of optical imaging in opaque brains. The technique was also able to trace neural activity during unrestrained motion of the animals.

“So far we demonstrated real-time analysis on whole brains of adult animals with roughly 2x3x4 millimeter dimensions (approximately 24 mm3),” says the study’s leader Razansky. State-of-the-art optical microscopy methods are currently limited to volumes well below a cubic millimeter when it comes to imaging of fast neural activity, according to the researchers. In addition, their FONT method is already capable of visualizing volumes of more than 1000 cubic millimeters with temporal resolution of 10 milliseconds.

Large-scale observation of neural activity is the key to understanding how the brain works, both under normal and diseased conditions. “Thanks to our method, one can now capture fast activity of millions of neurons simultaneously. Parallel neural networks with the social media: in the past, we were able to read along when someone (in this case, a nerve cell) placed a message with a neighbor. Now we can also see how this message spreads like wildfire,” explains Razansky. “This new imaging tool is expected not only to significantly promote our knowledge on brain function and its pathophysiology but also accelerate development of novel therapies targeting neurological and neuropsychiatric disorders,” he concludes.