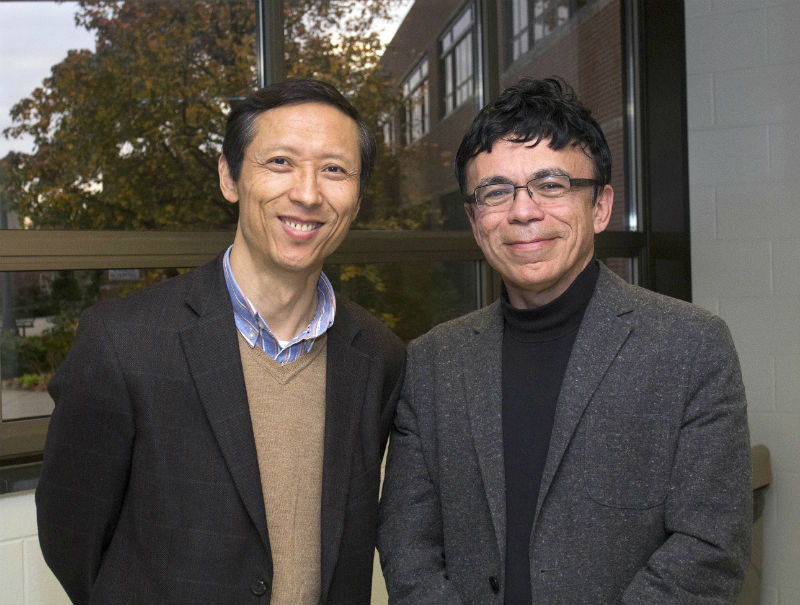 Purdue professors Riyi Shi, from left, and Babak Ziaie led research to develop and use a new system that has been shown to record for the first time how brain tissue deforms when subjected to the kind of shock that causes blast-induced trauma commonly seen in combat veterans. (Credit: Purdue University image/Kevin Doerr)

A new system that uses a wireless implant has been shown to record for the first time how brain tissue deforms when subjected to the kind of shock that causes blast-induced trauma commonly seen in combat veterans.

“Blast-induced traumatic brain injury, already one of the most significant wounds throughout Operation Enduring Freedom and Operation Iraqi Freedom, has become increasingly prevalent,” said Riyi Shi, a professor in Purdue University’s Department of Basic Medical Sciences, College of Veterinary Medicine, and Weldon School of Biomedical Engineering. “About 167,000 blast-induced traumatic brain injury cases have been documented during both deployments alone.”

The consequences are dire, ranging from neurodegenerative diseases such as chronic traumatic encephalopathy to neuropsychiatric conditions such as depression and anxiety.

“These risks pose a substantial public health burden upon military members’ return to civilian life, as the conditions are generally chronic and involve lengthy and costly treatment courses both in terms of dollars and quality of life,” Shi said. “To pursue targeted innovation of new preventative, diagnostic, and therapeutic measures, we must first develop a greater understanding of pathogenesis, the initiating mechanical events and the links between blast-induced damage and subsequent neuropathologies.”

The new research involves the use of a biocompatible “soft magnet” wireless sensor, inserted into the brains of laboratory rats. Because the gel-like magnet has mechanical properties similar to that of brain tissue, it is able to move with the brain when exposed to blast trauma, said Babak Ziaie, a professor of electrical and computer engineering and biomedical engineering.

Findings are detailed in a paper appearing on Friday (Nov. 20) in the journal Scientific Reports.

“This is the first time that anybody has been able to measure brain deformation in real time wirelessly,” Ziaie said.

Findings showed the brain does not move in a simple linear direction, but rather in a more complex motion covering a wide arc, likely resulting in greater damage than that caused by ordinary blunt-force trauma.

“There is no way to see brain deformation in blast-induced trauma events using conventional imaging technologies,” Ziaie said. “Because this is a wireless device, we can track the brain’s movement.”

The technology has a resolution of 5 to 10 microns, meaning deformation can be measured in minute detail. The magnet’s motion is tracked with three external sensors, creating a precise 3-D measurement.

“The system’s response time is very fast – milliseconds or faster,” Ziaie said. “Ordinary sensors take a signal every second, but the blast events are finished in a matter of milliseconds, so you miss everything.”

The magnet is about 3 millimeters in diameter – about six would fit across the diameter of a U.S. penny.

“It can be inserted into any part of the brain to study, for example, the hippocampus, which is critical for memory,” Shi said.

The research is an example of how interdisciplinary collaborations can help to find solutions not possible through the work of specialists from a single discipline alone, Shi said.

Future research will focus on specific regions of the brain. The research was funded by the National Institutes of Health.