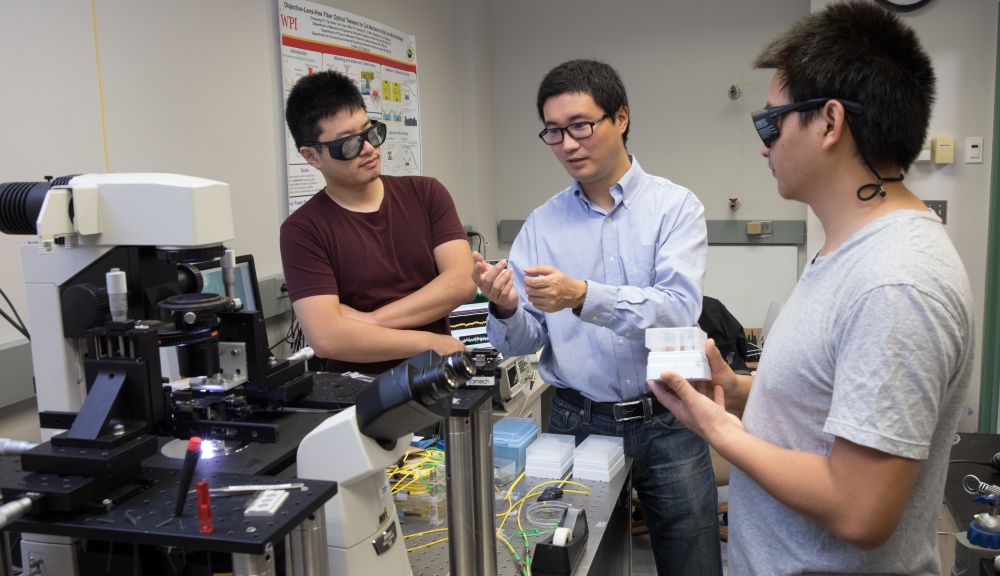 In a paper published in Nature Scientific Reports, a team of researchers at Worcester Polytechnic Institute (WPI) has demonstrated how a device that uses beams of light to grip and manipulate tiny objects, including individual cells, can be miniaturized, opening the door to creating portable devices small enough to be inserted into the bloodstream to trap individual cancer cells and diagnose cancer in its earliest stages.

The technique, known as optical tweezers, uses optical beams of laser light to create an attractive force field that can hold, or trap, small objects in place without physical contact. Traditional optical tweezers focus the light with a large and expensive lens, which makes the device bulky and susceptible to environmental fluctuations. These limitations make optical tweezers impossible to use outside the lab.

In their Scientific Reports paper (“Objective-lens-free Fiber-based Position Detection with Nanometer Resolution in a Fiber Optical Trapping System,”) a team led by Yuxiang “Shawn” Liu, assistant professor of mechanical engineering, explains how it has been able to replace the lenses with tiny optical fibers and miniaturize the device.

“Currently, to test for cancer, you must wait until there’s a visible tumor or a sufficient volume of cancerous cells in a blood sample,” he said. “By that time, the cancer may be advanced. But cancer starts with single cells. If doctors could separate those cells from among millions of blood cells, we could detect cancer much sooner—at a point where it’s not visible using other techniques. This could advance diagnoses by months or even years, and make treatment much more successful.”

First demonstrated in the 1980s, optical tweezers have become a critical tool for scientists in biology, chemistry, and physics to perform experiments at the molecular and cellular scales. Since they can trap small objects and hold them in place, away from contact with anything that could alter their state or function, the tweezers allow materials or individual cells to be studied without removing them from their native environments.

While the devices could be useful in the field (for testing water or soil samples, for example) or in hospitals and doctors’ offices, their current design makes them too large (about 2 to 3 ft. tall and about 2 ft. wide) and too sensitive (their accuracy can be affected by a light air current) to be useful outside a highly controlled lab setting.

To make the device smaller, lighter, and more portable, Liu decided to replace the lens with glass optical fibers. But since an optical fiber is extremely thin (about the width of a human hair), its tip is too small to act as a lens, so a single fiber cannot focus a laser beam intensely enough to create an optical trap. Liu found he could create a three-dimensional optical trap by using two fibers to project intersecting beams of light. In this way he could hold a tiny spherical object in place while simultaneously determining its position with nanometer accuracy and measuring the strength of the trap’s hold on the object.

“This proves we don’t need the lens to create the trap,” said Liu, who has been working on this project for about 12 years. “If we want to have a small, portable system, we need only optical fibers to trap and measure the cells.”

By using optical fibers, Liu said he can build optical tweezers that are more robust and 100 times smaller than traditional versions. With additional research, he said he believes he can create a clinical device about the size of a regular syringe that could be inserted into a blood vessel to trap individual cells. He said the tweezers could even be made part of a postage stamp–size lab-on-a-chip, which integrates a few lab functions on an integrated circuit. The chips could be sold at pharmacies so patients could test themselves at home.

While the clinical applications of the fiber optical tweezers may be several years off, the research team is working to further refine its device, creating a new package to protect the brittle tips of the optical fibers and to making the tweezers more user-friendly for other researchers. They also are working to find small, low-cost laser sources and optical detectors.