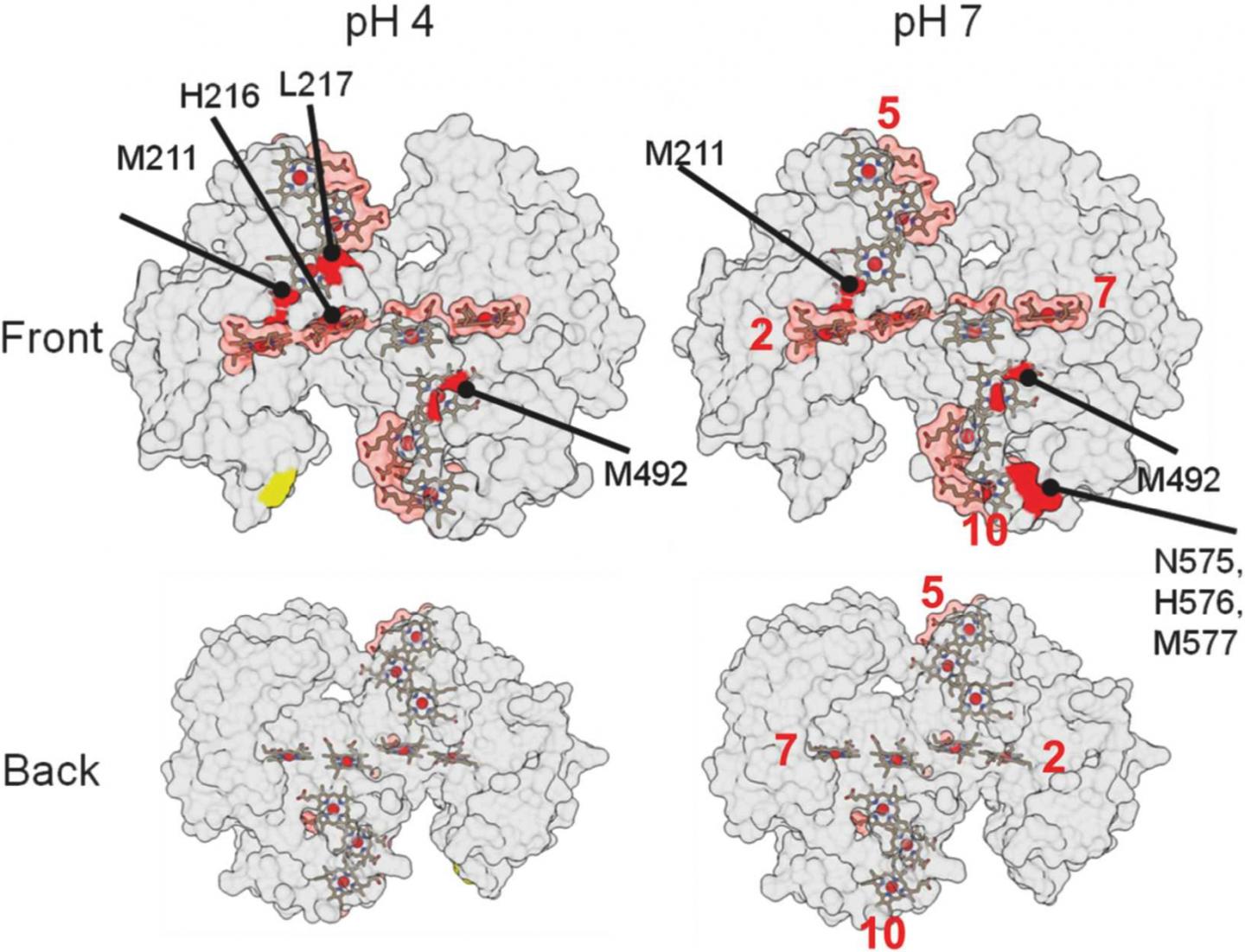 Scientists have discovered the details of an unconventional coupling between a bacterial protein and a mineral that allows the bacterium to breathe when oxygen is not available.

The research, conducted by a team of scientists at the Department of Energy’s Lawrence Berkeley National Laboratory (Berkeley Lab), could lead to new innovations in linking proteins to other materials for bio-based electronic devices – such as sensors that can diagnose disease or detect contaminants. It could also help researchers to understand and control the chemical reactions sparked by these protein-material interactions.

“Moving electrons to metals can cause different minerals to grow or dissolve. Studying how a protein does this can help us understand both how organisms remodel their environment and make biominerals for teeth or protection,” said Caroline Ajo-Franklin, a staff scientist in the Biological Nanostructures Facility at Berkeley Lab’s Molecular Foundry, which is a nanoscience research center.

Ajo-Franklin led the study, published online in the Journal of the American Chemical Societyearlier this month.

“Understanding what these interactions between proteins and materials look like can help us design them better,” she added, “and give us insight on how to connect living cells with devices.”

Researchers relied on an X-ray-based technique at Berkeley Lab’s Advanced Light Source, known as “footprinting,” to pinpoint the chemical connections between the bacterial protein and nanoparticles composed of iron and oxygen.

The study, which identified a surprisingly small and weak binding site, also benefited from tools and expertise at the Lab’s Molecular Foundry; and the Lab-led Joint BioEnergy Institute, which specializes in biofuels research.

The structure of this exotic protein had been previously mapped in isolation with atomic-scale detail by other research groups using X-ray crystallography, which required a crystallized form of the protein. But scientists didn’t know how it bound to the metal-containing mineral – conventional techniques can’t see this binding process.

In 2014, Ajo-Franklin learned from Corie Ralston, another Lab researcher who works in the Molecular Biophysics and Integrated Bioimaging (MBIB) Division, about the X-ray mass spectrometry footprinting technique, an innovative way to precisely probe proteins and their surroundings with X-rays at the Advanced Light Source.

Ajo-Franklin and Ralston were each pursuing separate Laboratory Directed Research and Development projects, and they saw that the two efforts could actually be complementary.

“Footprinting can tell you how proteins are interacting,” Ralston said. “It can provide structural and dynamics information about proteins in close to their native environment.”

The protein selected for the study is from a metal-reducing bacterium, Shewanella oneidensis, which “eats sugar and basically breathes minerals” when oxygen is unavailable, Ajo-Franklin noted. “One of the reason these organisms are so much fun to study is that they interact with a wide range of materials.”

After Tatsuya Fukushima, a former Lab scientist who was a co-lead author of the study, found a suitable way to prepare the protein and nanoparticles in a liquid solution for X-ray studies, Sayan Gupta, an X-ray footprinting expert in Berkeley Lab’s MBIB Division, used an X-ray beamline at the Advanced Light Source to study the samples.

“We are catching the snapshots of the state of this molecule at a particular time,” Gupta said. “It’s a simple technique and gives you lots of information about a protein’s native state.”

In this technique, X-rays produce highly reactive molecules known as hydroxyl radicals as they pass through the liquid solution surrounding the protein. These radicals modify the protein in a way that allows scientists to pinpoint slight chemical variations where the protein is in touch with the solution.

The regions of the protein that are interacting with other proteins or materials are protected from the radicals and not subject to the chemical alterations. The locations where the protein is not altered indicate where the binding occurs.

In the latest study, these chemical snapshots produced by the X-ray footprinting technique at different points in time were subsequently analyzed using a technique known as mass spectrometry at the Joint BioEnergy Institute.

A detailed analysis by Fukushima revealed how the protein connected to the mineral.

“The biggest finding, that was quite surprising, was that our proteins bind relatively weakly,” Ajo-Franklin said. “Most proteins that interface with materials bind really tightly,” changing shape as they form this connection. This particular protein doesn’t appear to change shape at all and only interacts with the mineral in a small area, requiring about five times less binding energy, by comparison, than typical proteins that form biominerals.

That actually makes a lot of sense, she added. “The job of this protein is to transfer electrons to the mineral, so it doesn’t have to be in contact for very long.”

The research team is now working to study how this and similar proteins interact with a range of minerals.

“There are a bunch of proteins in this family,” Ajo-Franklin said. “We are really excited to see how these proteins interact with different materials. Do they all use the same binding strategy?”

This study already provides ideas on how to redesign these proteins to make better electronic connections and thus more sensitive bioelectronic sensors – a project Ajo-Franklin is working on.