For the first time, scientists have observed a chemical interaction between two biomolecules.

Using the X-ray laser at the Department of Energy’s SLAC National Accelerator Laboratory, scientists imaged a biomolecule as it flipped an RNA “switch,” a mechanism that controls the production of proteins.

“Previous experiments at SLAC’s X-ray laser have studied biological reactions like photosynthesis that are triggered by light,” lead researcher Yun-Xing Wang, a structural biologist at the National Cancer Institute’s Center for Cancer Research, said in a news release. “But this is the first to observe one that is triggered by the chemical interaction of two biomolecules in real time and at the atomic scale.”

The ability to watch biochemical processes play out in real time was made possible by SLAC’s X-ray free-electron laser. 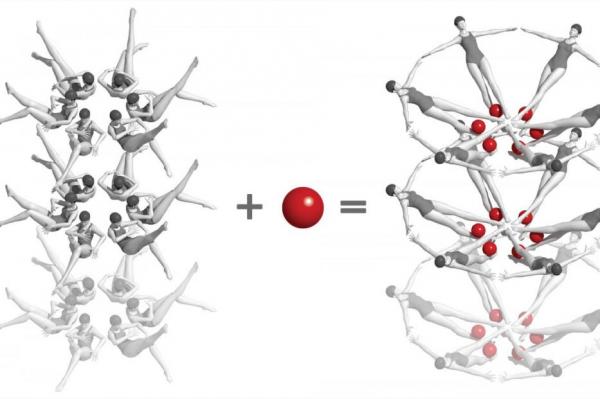 “This really demonstrates the unique capability that X-ray free-electron lasers offer that no current technology, or any other technology on the horizon, can do,” Wang said. “It’s like you have a camera with a very fast shutter speed, so you can catch every move of the biomolecules in action.”

Scientists hope their latest findings — detailed in the journal Nature — and the technology that made it possible will pave the way for an improved understanding of riboswitches.

Riboswitches and other RNA mechanisms are genetic interpreters, translating DNA into biochemical instructions for the production of the proteins that fuel the biological processes that sustain life.

Understanding how RNA mechanisms regulate biological process could help scientists identify where and how switches sometimes fail, and how these malfunction yield diseases like cancer.

Wang and his colleagues looked at a specific riboswitch in the bacterium Vibrio vulnificus — a switch that regulates the abundance of adenine. Too much adenine triggers the riboswitch to shut down production of the molecule.

Scientists were surprised to find the flipping of the riboswitches caused the nanocrystals to change shape.

“To me it’s still a mystery how the crystal managed to do that,” said Soichi Wakatsuki, a professor at the Stanford School of Medicine who did not participate in the research. “This actually opens up a lot of new possibilities and gives us a new way to look at how RNA and proteins interact with small molecules, so this is very exciting.”