It’s easier than ever to sequence our DNA, but doctors still can’t exactly tell from our genomes which diseases might befall us. Professor Fritz Roth is setting out to change this by going to basics — to our billion-year-old cousin, baker’s yeast.

By testing the effects of human mutations in yeast, Roth’s research team at the University of Toronto’s Donnelly Centre for Cellular and Biomolecular Research and the Lunenfeld-Tanenbaum Research Institute was able to identify harmful changes in the DNA better than leading algorithms. The ultimate goal of his approach, detailed in the latest issue of Genome Research is to create “look-up tables” of damaging mutations to help clinicians diagnose patients more accurately.

The reason our genomes remain impenetrable is the vast amount of genetic diversity among us. Of the three billion DNA letters in the genome, three million are different between any two people. The vast majority of these differences, also called genetic variants, have no bearing on our lives. But some variants change proteins, the molecular machines that do much of the work in our cells — and this could lead to disease.

“If we want to interpret people’s personal genomes, then we need a way of knowing whether variants are damaging the gene they are in,” says Roth, who is also a professor in the Department of Molecular Genetics and co-director of the Canadian Institute for Advanced Research Genetic Networks Program.

Currently the only way to predict damaging mutations, for most genes, is through computational methods. For some genes, however, damaging mutations can be detected using yeast. The international team led by Roth did a head-on comparison of yeast against the machine to see which approach fared better at finding disease-causing mutations.

Yeast cells are simple, yet their basic architecture is similar to human cells. Because almost half of our genes have a shared ancestry with a yeast gene, it is often possible to study human genes in this easy-to-manipulate living organism. 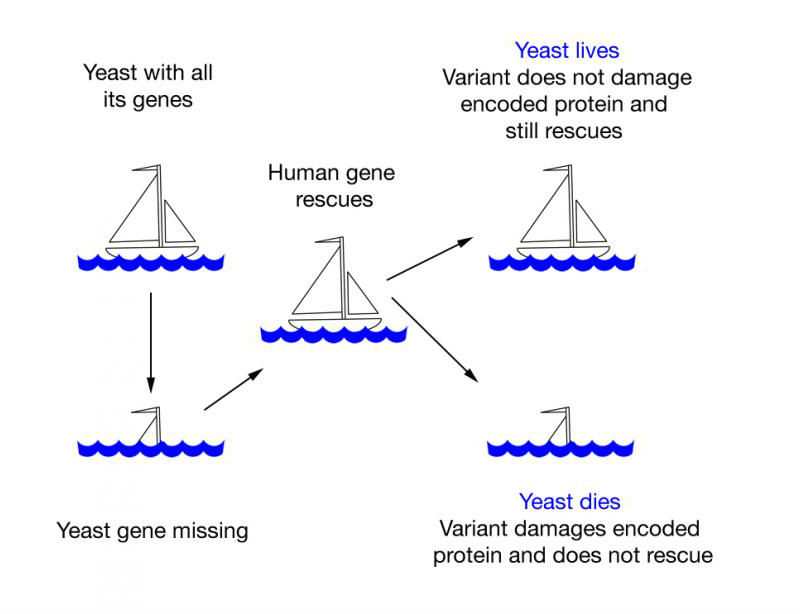 One way to test a human gene’s function is to see whether it can replace a yeast counterpart gene. Think of yeast as a ship — taking a gene out leaves a hole in the bottom. Scientists then try to stop the leak by plugging the hole with the matching human gene to prevent the ship from sinking. If the normal human gene can rescue the yeast but a mutated one cannot, Roth predicts that the mutation is damaging. Thanks to yeast’s fast rate of growth, it is possible to know within days which versions of human genes fail to keep the yeast afloat. These same variants are also likely to be damaging for human cells and could matter for our health.

Roth’s team focused on 22 genes, linked to conditions such as autism, mental retardation and heart disease, and whose intact copies were able to replace their yeast counterparts. Previous work found these genes to be present in hundreds of variations among people. Roth’s group tested 179 variants, roughly half of which are reported to cause disease.

To test variant function, the researchers inserted each human variant, one by one, in place of a matching yeast gene, using a comprehensive library of yeast strains created by Professors Brenda Andrews and Charlie Boone’s groups at the Donnelly Centre. They then watched how well the yeast grew and this allowed them to predict whether or not a variant was harmful. Importantly, this simple test in a billion-year old machinery outperformed the best available computational methods. Based on cell-growth data, the researchers were able to identify 62 per cent of disease variants as damaging. By contrast, the best current computational method could confidently identify only 23 per cent of disease variants.

“By every measure we are beating the computational predictions. Some might say it’s obvious that an experiment beats a computational prediction, but many clinicians would not accept evidence about human variants based on how they perform in baker’s yeast. Our paper highlights the important and direct role that model organisms can play in interpreting individual human genomes,” says Roth.

For the subset of human disease genes that will be able to fill in for their yeast counterparts, Roth believes it is possible to test all variants this way. For other genes, similar assays could be done in other model organisms or using other tests in yeast. The goal is to create lists of experimentally tested mutations before they are detected in the genomes of affected patients.

“I think the way to go forward is to do all of the experiments up front before you’ve even seen the variants in the clinic. Organized networks of researchers could test the variants in a common way so that we can build a resource so that clinicians can go immediately to the look-up table,” says Roth.

Sometimes you need to turn to the basics — in this case a simple organism like yeast — in order to tackle some of our most complex medical challenges.