The SynCardia temporary Total Artificial Heart (TAH-t) saved Danielle Weston’s life, a life that would have been cut short by heart failure.

Three weeks of support from the SynCardia Artificial Heart helped Weston accomplish her dreams—earn a college degree, establish a career and have a family. In short, she got a second chance at the full life she came very close to losing.

The 26-year-old resident of Brookfield, WI, near Milwaukee was born with Marfan syndrome, a genetic disorder that affects connective tissue. Because one of its effects on patients is enlargement of the aorta, which is the main heart artery that channels blood to the entire body, Weston has been regularly checked for heart issues. 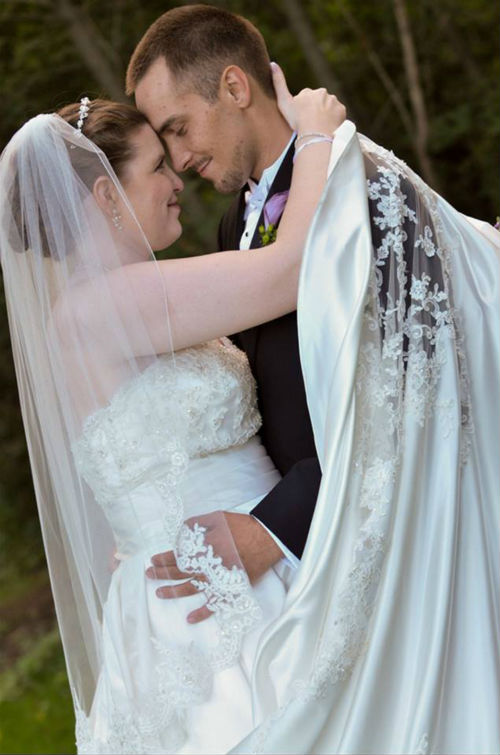 In 2009, when her aorta became enlarged, Weston had surgery for an aortic graft, as well as a pacemaker. While she felt fine after the surgery, “I never really fully got my energy level back,” says Weston, a former high school team dancer. She took several long naps every day.

In the winter of 2011, Weston thought she was having a hard time shaking off the flu—a typical ailment for child care workers such as herself. Her symptoms worsened and she decided to see her long-time primary care doctor. When she arrived at the medical practice, she didn’t have enough breathing capacity to walk from the car to the doctor’s office.

“He told me I had to go over to Aurora St. Luke’s Medical Center right away,” she recalls.

While testing her for pneumonia, doctors discovered a massive infection of her heart that had led to endocarditis, an inflammation of the inside lining of the heart chambers and valves.

“I was told the infection was like ping pong balls all over my heart, the pacemaker wires and the valves,” says Weston. The infection was also found on her kidneys, spleen and lung.

After a heavy regimen of antibiotics, during which time Weston suffered high fever and blood clots, surgeons hoped to repair the damage to her heart in the operating room (OR).

But while lying sedated in the OR waiting for the surgery to begin, Weston’s heart stopped. Because she was already in the OR, surgeons were able to quickly put her on bypass machinery. This helped save her vital organs from additional damage since crucial oxygenated blood flow was rapidly provided through this equipment.

Doctors told her parents that there were three options: Do nothing, repair what they could to give her a few days of life before her organs began to fail, or implant the SynCardia Artificial Heart so she could regain her strength until a matching donor heart became available.

“My mom knew I didn’t want to die at 22, so they decided the SynCardia Total Artificial Heart was the only option,” Weston says.

Like a heart transplant, the SynCardia Artificial Heart replaces the two failing heart ventricles and the four heart valves. It is the only FDA-approved device in use that eliminates the source of end-stage biventricular heart failure in which the native heart’s two ventricles can no longer pump enough blood for a person to survive.

“What do you mean I don’t have my heart in my body,” Weston remembers asking her mother after hearing what happened during her January 19, 2012, implant surgery. “I’m still alive.” It was a lot to process.

“Physically, I could tell that my body was working better,” she adds. “I was awake most of the day, which was a new thing for me.”

Every day for three weeks Weston walked a little farther until she was able to walk the entire hospital floor. Then news came on February 11 that a donor heart had been found. She received the transplant that day and was discharged from the hospital two weeks later.

“My doctor said the artificial heart allowed my body to rest and recover from the infection, as well as get my body ready for the transplant,” Weston says.

She went on to complete her studies and earn her associate degree in early childhood development, graduating with honors. Today she continues her career as an infant teacher. She and her mother volunteer for Donate Life to encourage organ donation.

On September 12, 2016, she will celebrate her first wedding anniversary with her husband Chris and stepson Aiden. They had been together for a year when Danielle received her SynCardia Total Artificial Heart. Chris proposed after she was discharged from the hospital with her donor heart. They celebrated their marriage with more than 300 friends and family members.

“I would have missed all of that,” she reflects. “Now look at what I get to look forward to because the SynCardia Artificial Heart was available to me. I’m so blessed with everything that’s coming. I try not to take one moment for granted.”

SynCardia Systems, Inc. in Tucson, Arizona, is a medical technology company focused on developing and manufacturing the SynCardia temporary Total Artificial Heart (TAH-t). The SynCardia TAH-t is an implantable system designed to assume the full function of a failed human heart in patients suffering from end-stage biventricular (both sides) heart failure.

The SynCardia TAH-t is the only total artificial heart that is commercially available in the United States, European Union and Canada for use as a bridge to donor heart transplantation.

More than 1,625 implants of the SynCardia Total Artificial Heart account for over 550 patient years of life on the device. Since January 2012 more than 600 SynCardia Hearts have been implanted.

The youngest patient to receive a SynCardia Heart was 9 years old; the oldest was 80 years old. The longest a patient has lived with a SynCardia Heart and received a successful donor heart transplant was nearly four years (1,373 days).