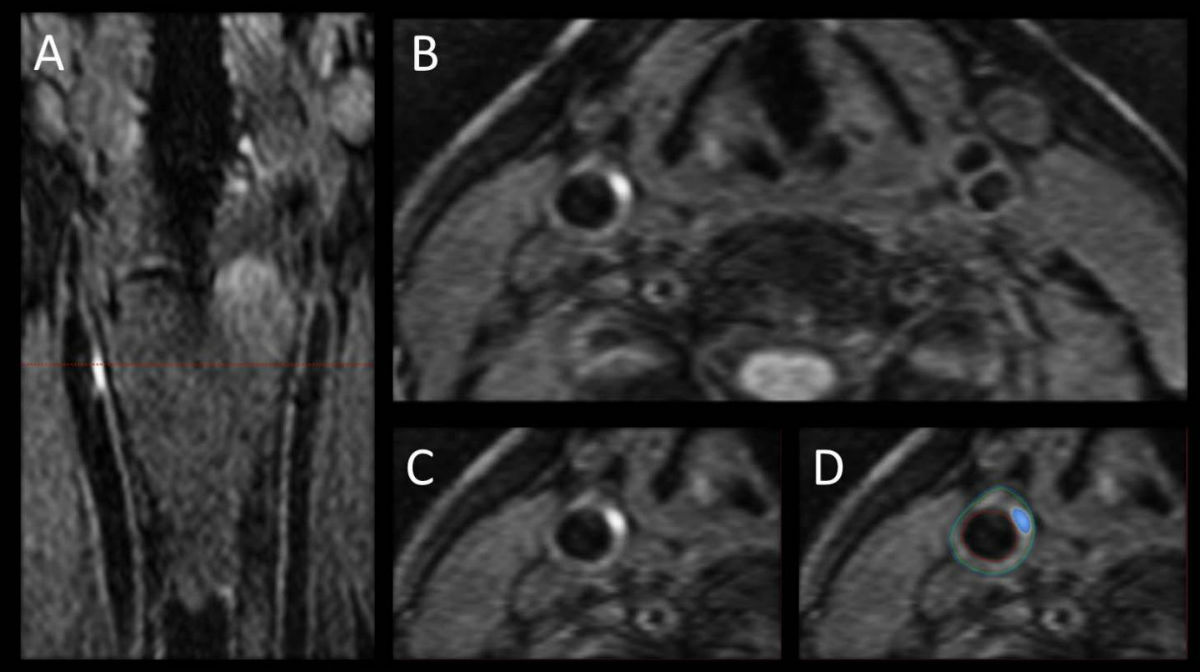 Image A shows the 3D MRI intraplaque hemorrhage (IPH) sequence as acquired in the coronal plane. The red dotted line indicates the level at which the reformatted axial plane, B, was obtained. C shows the section of the right carotid artery with a region of high signal consistent with IPH. Contours are drawn for the outer wall (green) and lumen (red) with the area of IPH in this segment shaded blue in D. (Credit: Radiological Society of North America)

People with diabetes may be harboring advanced vascular disease that could increase their risk of stroke, according to new research being presented next week at the annual meeting of the Radiological Society of North America (RSNA). The findings suggest that arterial imaging with 3D MRI could be useful in helping to determine stroke risk among diabetics.

For the new study, researchers used 3D MRI to study the carotid arteries for evidence of intraplaque hemorrhage (IPH), an indicator of advanced atherosclerotic disease.

“A recent analysis of multiple studies has shown that people with carotid artery narrowing and IPH have a five- to six-times higher risk of stroke in the near future compared to people without,” said study author Tishan Maraj, M.B.B.S., imaging analyst at Sunnybrook Research Institute and M.Sc. candidate at the University of Toronto in Toronto, Canada.

Dr. Maraj and colleagues focused their study on people with diabetes, a group already facing a significantly increased risk of strokes with worse outcomes than the non-diabetic population. They used 3D MRI to investigate the prevalence of carotid IPH in 159 asymptomatic type 2 diabetic patients, average age 63, recruited from a dietary trial between 2010 and 2013.

“It was surprising that so many diabetic patients had this feature,” Dr. Maraj said. “We already knew that people with diabetes face three to five times the risk of stroke, so perhaps IPH is an early indicator of stroke risk that should be followed up.”

While 2D MRI has been used for more than a decade to identify and characterize carotid artery plaques, the 3D method brings an extra level of imaging power, Dr. Maraj noted.

“The advantage of 3D MRI is you can image the entire carotid artery and pinpoint the area of interest over a shorter period of time compared with multiple 2D sequences,” he said.

Dr. Maraj emphasized that the study did not look at outcomes for the patients and did not draw any conclusions on whether people with IPH will develop carotid artery blockages more quickly than those with no IPH present. However, it is already known that blood is a destabilizing factor of plaque that promotes rupture, setting off a chain of events that can lead to a stroke.

Although there is no treatment for IPH at this time, Dr. Maraj said identification of it may help with risk stratification and could even have applications in the non-diabetic population.

“Even though you can’t treat IPH, you can monitor patients a lot more closely,” he said.