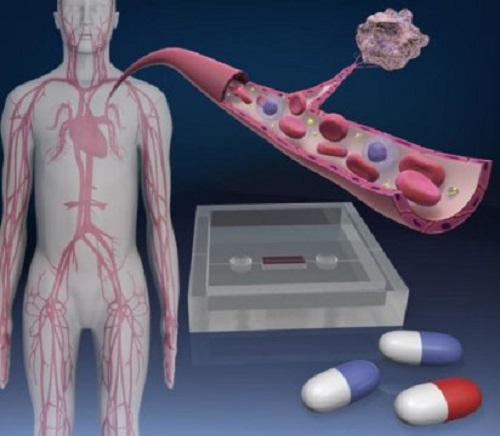 Credit: Institute Of Industrial Science, The University Of Tokyo

Researchers at the Institute of Industrial Science (IIS), the University of Tokyo, CNRS and INSERM, report a new organ-on-a-chip technology for the study of blood vessel formation and drugs targeting this event. The technology recreates a human blood vessel and shows how new capillaries grow from a single vessel (parent vessel) in response to proper biochemical signaling cues. The technology can further be used to develop drugs targeting this growth as a therapeutic approach to treat cancer and blood-vessel-related diseases. The study can be read in EBioMedicine.

Angiogenesis describes a specific process of blood vessel formation from pre-existing blood vessels. Dr. Yukiko Matsunaga, lecturer at the IIS, the University of Tokyo, has been working in the SMMIL-E project, a joint French-Japanese project against cancer (involving the CNRS, COL, Universite de Lille, the University of Tokyo), by using tissue engineering and organ-on-a-chip technology to study various biological phenomena including angiogenesis. Her new technology provides a simple setting to study angiogenesis other effects such as the dynamics of blood vessel permeability.

Vascular endothelial growth factors (VEGF) are the primary proteins responsible for angiogenesis. They signal to the parental vessel to initiate sprouting and the direction toward which the new capillaries must grow.

“The biochemistry of sprouting angiogenesis is well understood. VEGF leads endothelial cells to express DLL4, which activates NOTCH signaling. What is lacking is a good system to study drugs that are effective on angiogenesis,” said Matsunaga.

Indeed, while necessary for organ survival, angiogenesis also sustains diseases like cancer. Several anti-cancer drugs such as sorafenib and sunitinib are effective in large part because of their anti-angiogenic effects.

In the new system, which was designed by Dr. Joris Pauty, a scientist in the Matsunaga laboratory, a single human blood vessel is fabricated into a collagen gel scaffold on a chip. Adding VEGF stimulated the formation of sprouts on the vessel, indicating the initiation of new blood vessels. Subsequent experiments performed with the support of a member of the SMMIL-E project, Dr. Fabrice Soncin (INSERM, France) confirmed that VEGF activated NOTCH signaling through DLL4 just as in the human body. Adding either sorafenib or sunitinib inhibited the sprouting, but only sorafenib made the vessels highly permeable, which is a non-physiological condition. That both drugs prevented new vessel growth but with different effects on blood vessel permeability may explain why the two work differently in cancer treatment.

Since many diseases like cancer and diabetic retinopathy induce new vessels for their progression, Matsunaga noted that the chips could be used for even more advanced studies for drug effects on angiogenesis and cancer or diabetes.

“We can also use cancer cells into the chip to test their combined effects with the drugs on angiogenesis.”