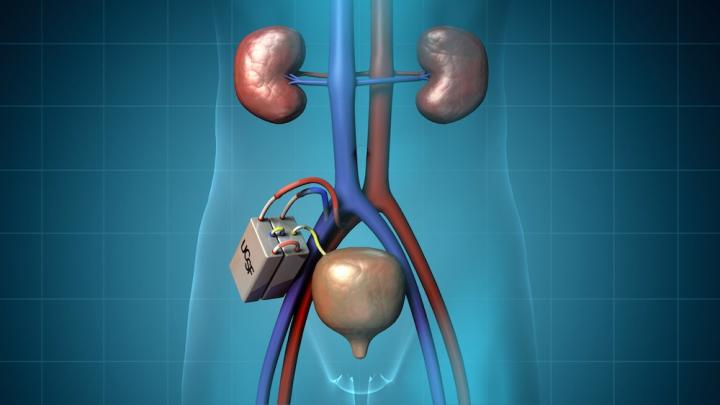 This image shows a kidney. Development of a surgically implantable, artificial kidney — a promising alternative to kidney transplantation or dialysis for people with end-stage kidney disease — has received a $6 million boost, thanks to a new grant from the National Institute of Biomedical Imaging and Bioengineering (NIBIB), one of the National Institutes of Health, to researchers led by UC San Francisco bioengineer Shuvo Roy, Ph.D., and Vanderbilt University nephrologist William Fissell, M.D. (Credit: UCSF)

Development of a surgically implantable, artificial kidney — a promising alternative to kidney transplantation or dialysis for people with end-stage kidney disease — has received a $6 million boost, thanks to a new grant from the National Institute of Biomedical Imaging and Bioengineering (NIBIB), one of the National Institutes of Health, to researchers led by UC San Francisco bioengineer Shuvo Roy, PhD, and Vanderbilt University nephrologist William Fissell, MD.

“We aim to conduct clinical trials on an implantable, engineered organ in this decade, and we are coordinating our efforts with both the NIH and the U.S. Food and Drug Administration,” Roy said.

Roy is a professor in the Department of Bioengineering and Therapeutic Sciences in the Schools of Pharmacy and Medicine, and technical director of The Kidney Project at UCSF, a multi-institutional collaboration. The Kidney Project team has prototyped and begun testing key components of the coffee-cup-sized device, which mimics functions of the human kidney.

Roy and Fissell will present updates on development of the device November 3-8 at Kidney Week 2015 in San Diego, part of a major meeting of the American Society of Nephrology.

NIBIB is overseeing and funding the continuation of their work for four years under a cooperative agreement through its Quantum Program, created to support the development of “biomedical technologies that will result in a profound paradigm shift in prevention, detection, diagnosis, and/or treatment of a major disease or national public health problem.” This is the second major grant the researchers have received through the program.

In part because the U.S. population has grown older and heavier and is more likely to develop high blood pressure and diabetes, conditions often associated with kidney failure, the number of individuals diagnosed with kidney failure is growing year-over-year and has risen 57 percent since 2000, according to the National Kidney Foundation. More than 615,000 people now are being treated for kidney failure. U.S. government statistics indicate that kidney failure costs the U.S. healthcare system $40 billion annually and accounts for more than six percent of Medicare spending.

The waiting list for kidney transplants in the United States has grown to more than 100,000 people. The number of available kidneys has remained stagnant for the past decade, and only about one in five now on the list is expected to receive a transplant.

More than 430,000 of those with kidney failure now undergo dialysis, which is more costly and less effective than transplantation and typically requires hours-long stays at a clinic, three times weekly. Only about one in three patients who begins dialysis survives longer than five years, in comparison to more than four in five transplant recipients.

Fissell, associate professor in the Department of Medicine at Vanderbilt and medical director for The Kidney Project, said, “This project is about creating a permanent solution to the scarcity problem in organ transplantation. We are increasing the options for people with chronic kidney disease who would otherwise be forced onto dialysis.”

Along with Roy at UCSF and Fissell at Vanderbilt, a national team of scientists and engineers at universities and small businesses are working toward making the implantable artificial kidney available to patients.

According to B. Joseph Guglielmo, PharmD, dean of the UCSF School of Pharmacy, “The grant from NIBIB is a striking affirmation of the promise associated with this device, as well as NIH confidence in the ultimate success of The Kidney Project. Patients with chronic kidney failure are in real need of alternatives to transplant and dialysis; this School of Pharmacy and campus priority clearly demonstrates the research rewards of working collaboratively.”

In September the project was designated for inclusion in the FDA’s new Expedited Access Pathway program to speed development, evaluation, and review of medical devices that meet major unmet needs in fighting life-threatening or irreversibly debilitating diseases. The program evolved from an earlier FDA program called Innovation Pathway 2.0, in which The Kidney Project team was one of three device-development groups selected for a pilot initiative focused on kidney failure. Members of the FDA regulatory staff have continually been in communication with Roy and other project leaders to help guide device testing and criteria for data collection.

The aim of the new program is to speed the FDA’s premarket approval (PMA) process for scientific and regulatory review of safety and effectiveness of Class III medical devices — those with the potential to provide major benefits, but that also might potentially pose major risks.

“The new program brings FDA reviewers, scientists, and leadership together with our team to define a roadmap to regulatory approval and product launch,” Roy said.

Early Studies of Artificial Kidney Prototype Are Encouraging
One component of the new artificial kidney is a silicon nanofilter to remove toxins, salts, some small molecules, and water from the blood. Roy’s research team designed it based on manufacturing methods used in the production of semiconductor electronics and microelectromechanical systems (MEMS). The new silicon nanofilters offer several advantages — including more uniform pore size — over filters now used in dialysis machines, according to Roy. The silicon nanofilter is designed to function on blood pressure alone and without a pump or electrical power.

The second major component is a “bioreactor” that contains human kidney tubule cells embedded within microscopic scaffolding. These cells perform metabolic functions and reabsorb water from the filtrate to control blood volume. A project collaborator, H. David Humes, MD, professor in the Department of Internal Medicine at the University of Michigan, earlier showed that such a bioreactor, used in combination with ultrafiltration in an external device, greatly increased survival in comparison to dialysis alone in the treatment of patients with acute kidney failure in a hospital intensive care unit.

The artificial kidney being developed by Roy and Fissell is designed to be connected internally to the patient’s blood supply and bladder and implanted near the patient’s own kidneys, which are not removed.

Unlike human kidney transplant recipients, patients with the implantable artificial kidney will not require immunosuppressive therapy, according to Roy. Preliminary preclinical studies indicate that the non-reactive coatings developed for device components are unlikely to lead to filter clogging or immune reactions, he said, and that bioreactor cells can survive for at least 60 days under simulated physiological conditions.

About one-half of the new funding from NIBIB will support lab studies on methods for optimizing performance of the bioreactor’s kidney cells. The remainder will enable refinements for the mechanical design of the nanofilter unit and biocompatibility of the artificial kidney. The filter will be evaluated in preclinical studies aimed at achieving clot-free operation and stable filtration for 30 days.

Private philanthropy and UCSF support already have been vital in sustaining The Kidney Project, and even with the FDA’s new and more flexible pathway, additional funding will be required to meet project timelines, Roy said.