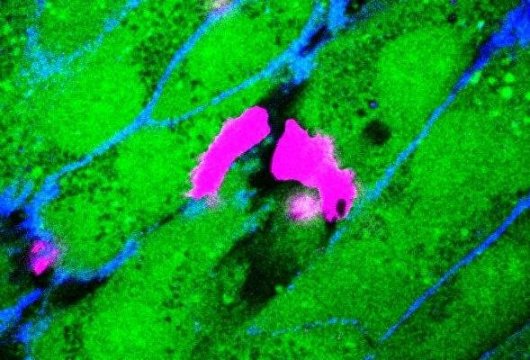 For a tumour to grow, it must develop blood vessels that supply nutrients and oxygen. Preventing tumour vascularization is therefore an interesting anti-tumour therapy that has been explored over the last ten years. But how to be truly effective? By identifying two cytokines, key factors in the recruitment of blood cells essential to the formation of new blood vessels, and above all by deciphering how these factors interact simultaneously with blood vessels, researchers at the University of Geneva (UNIGE) are highlighting an additional way of controlling tumour progression. Moreover, their results, to be read in Nature Communications, suggest that the combined use of existing drugs or under development could significantly increase their efficacy.

Endothelial cells form the innermost layer of the blood vessels -the endothelium- and have the function of containing blood inside the vessels while allowing the passage of nutrients to tissues. When a new vessel is needed, the endothelial cells direct the process by allowing the recruitment of blood cells required for neovascularization, commonly called angiogenesis.

Monocytes, on the other hand, are part of the white blood cells circulating in the blood. Key elements of the immune system, they also have the ability to turn into several cell types after having passed the endothelial barrier, in order to fulfil different functions depending on the tissue. A particular subpopulation of monocytes has angiogenic properties that enables vascularization. In case of cancer, the tumour must therefore recruit these monocytes to vascularize. But how does this process work? “Our laboratory is specialized in deciphering the molecular mechanisms involved in the recruitment of white blood cells, explains Dr. Adama Sidibé, a researcher at the Faculty of Medicine at UNIGE and the first author of this work. We have therefore taken a close look at these recruitment mechanisms in order to identify their shortcomings.”

How to prevent tumour vascularization?

One of the first treatments of this type, developed as early as 2004, specifically aims at slowing the growth of new blood vessels and at preventing neovascularisation of tumours. It is an inhibitor of a vascular endothelial growth factor, a cytokine called VEGF. Although this drug is still part of the pharmaceutical arsenal against cancer, it has many undesirable side effects, such as high blood pressure or kidney failure, and is rapidly losing its efficacy.

Other strategies aimed at monocytes as a whole were also developed, with limited effectiveness. There are indeed several sub-populations of monocytes, each with a different role. This is why a massive and indiscriminate attack unbalances the entire system, with an important consequence: when treatment ceases, the first monocytes to regain control are those that help tumours to develop. “Therefore, knowing in detail the recruitment mechanisms of the monocyte subpopulation in charge of neovascularisation makes it possible to prevent their recruitment without disturbing the rest of the system,” points out Beat Imhof, professor at the Faculty of Medicine of UNIGE, who directed this work.

Initially, the Geneva researchers observed the vascularisation processes of human tumour cells from different cell lines. Indeed, not all tumours have the same aggressiveness, nor the same angiogenic capacity; it was therefore a question of observing whether the recruitment of these cells took place differently, depending on the type of malignant cells involved. Indeed, scientists have found a difference in their ability to recruit pro-angiogenic monocytes. Dr Sidibé describes how: “The ability of tumours to recruit angiogenic monocytes is due to the ability of the tumours themselves to produce cytokines. Tumours that preferentially recruit these monocytes secrete a number of cytokines, including TNF-alpha and VEGF.” In the second part of their work, they used primary tumour cells taken directly from 27 patients, the scientists again identified the same cytokines.

Third step: the researchers tested separately, in an in vitro cell recruitment model, the ten cytokines identified in this study. TNF-alpha and VEGF have proven to be particularly effective: TNF-alpha allows adhesion to endothelial cells, while VEGF authorizes the passage through the endothelial barrier. Both are essential for angiogenesis.

The combined effect of TNF-alpha and VEGF therefore allows the efficient recruitment of pro-angiogenic monocytes essential for tumour vascularisation. “Our study shows that we need to target the right cytokines at the right time, and above all that we need to use the mechanisms we have discovered to define new lines of anticancer treatments. Thus, combining medicines that already exist -against VEGF, in particula- or whose development is already well advanced, would make it possible to optimise their effectiveness, rather than using them separately,” concludes Professor Imhof.