Today, patients with cataracts can choose from several types of artificial lenses, which are surgically implanted in the eye to replace cloudy lenses that obstruct vision. A new vision simulator could help these patients see how the world would look with each type of implanted artificial lens, before they have surgery.

In The Optical Society’s journal for high impact research, Optica, researchers in Spain describe and demonstrate their new hand-held device called the simultaneous vision simulator, or SimVis. With SimVis, patients can experience how a certain implanted lens would affect their vision by simply looking through the device.

“There are many different intraocular lenses in the market, which provide different balances of near and far vision,” said Aiswaryah Radhakrishan, researcher at the Instituto de Optica, Consejo Superior de Investigaciones Clientificas, Spain. “We have discovered a way to simulate these intraocular lenses and demonstrated a prototype device that allows patients to test different solutions before surgery and choose the one that best suits their needs.” 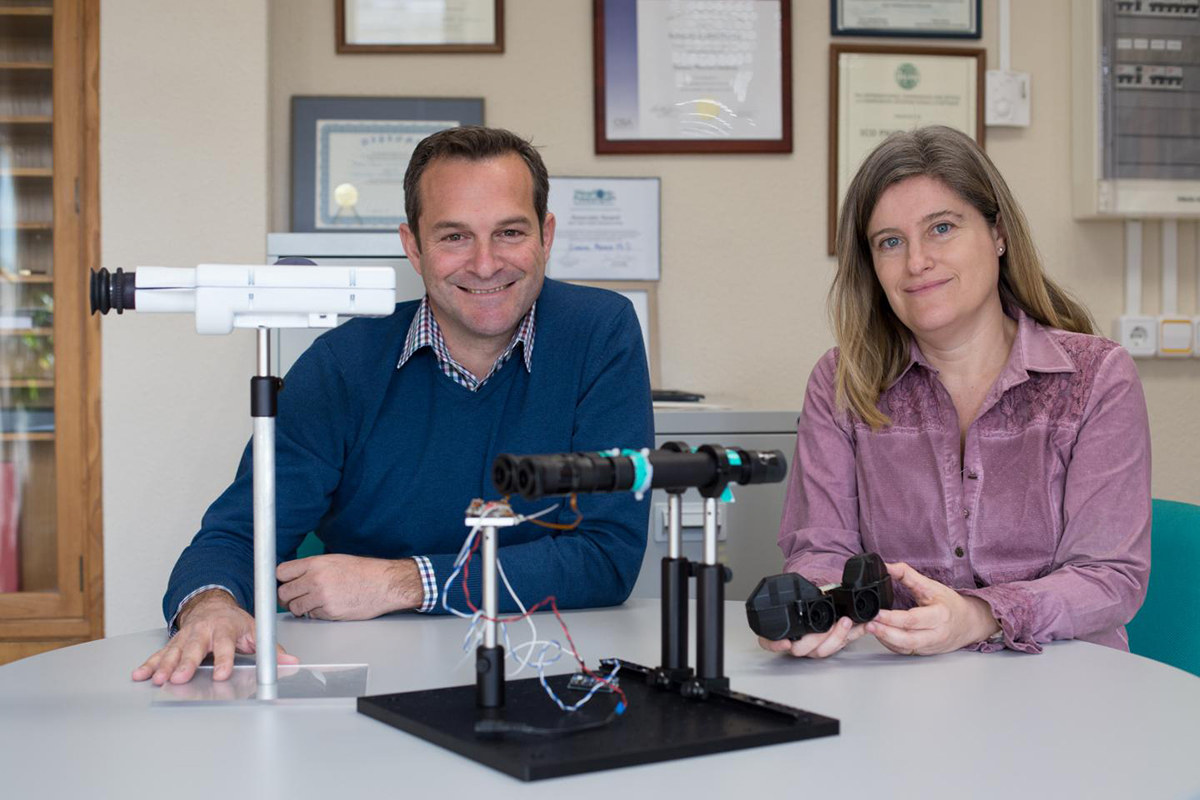 Carlos Dorronsoro and Susana Marcos invented a vision simulator that aims to make it easier for cataract patients to choose an implantable lens. The researchers have tested the monocular device and are working on a binocular version that would simulate different types of lenses in each eye. (Credit: Carlos Dorronsoro, Instituto de Optica, Consejo Superior de Investigaciones Científicas)

In the last decade, lens companies have designed intraocular lenses that not only replace the cloudy lens of the eye but can also correct the patient’s vision, to reduce the need for glasses. This correction is not perfect, however. The natural lens is stretched by muscles in the eye to change its shape, and thus its focal length, to shift from having up-close and far objects in sharp focus on the retina. Current implanted intraocular lenses do not have this capability to change shape like this.

Instead, standard intraocular lenses are monofocal, i,e, they correct only far vision, which creates sharp vision for far-away objects but blurred vision for objects close by. Patients would then wear glasses to correct near. There are also newer multifocal lenses that focus both near and far objects onto the retina at the same time but with some loss of image quality and contrast for both near and far distances. The choices for monofocal, and, particular multifocal intraocular lenses keep growing as more designs enter the market.

“Currently, the decision on which intraocular lens is implanted during cataract surgery is typically based on the explanations and experience of the surgeon,” said Carlos Dorronsoro, first author of the paper. “But it is difficult for patients to imagine the new visual experience provided by some of these lenses, therefore, it is very difficult to make the decision.”

The SimVis uses an optoelectronic tunable lens that changes shape in response to an applied electric current. To simulate multifocal lenses, the shape of this tunable lens can be switched so quickly that the resulting oscillations in focal positions can be perceived by human vision. A patient looking through the device would see near and far distances in focus at the same time, as well as experiencing the loss of image quality and contrast that comes with multifocal lenses.

The researchers asked nine volunteers to use the SimVis to compare seven different lenses providing monofocal, bifocal or trifocal corrections while looking at a poster of a landscape, a laptop, a tablet, and a smartphone, with high contrast text and eye charts placed at different distances. Based on the lens simulations, the testers indicated clear preferences for certain corrections.

“The favored or rejected lenses were different for different testers, suggesting the need for this kind of simulation prior to surgery to customize the selection of lenses according to patient requirements,” Dorronsoro said. “Clinical use of the SimVis could provide an evidence-based way to assess the subjective needs and preferences of patients before they undergo cataract surgery.”

The researchers are now working on a binocular version of the SimVis that is smaller and can simulate different lenses in each eye. Appearing much like a virtual reality helmet, this new version of the SimVis will also be lighter and have a wider field of view than the device demonstrated in the Optica paper. They are looking to complete the necessary clinical validations so that the binocular version of SimVis can be sold commercially by next year.