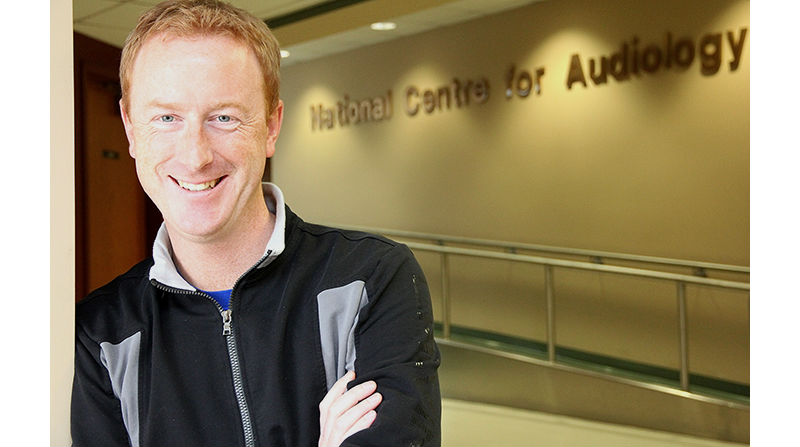 While cochlear implants have opened up new worlds for deaf individuals, one Western researcher is looking to bring a balance to adult patients they have not previously experienced.

Mathias Dietz, Canada Research Chair (Auditory Neuroscience/Binaural Hearing), is exploring ways to develop cochlear implants that, when placed in each ear, ‘talk’ to each other and achieve true binaural hearing for the user.

This type of ‘conversation’ between devices has already been developed for hearing aids, by Dietz’s former PhD supervisor at the The Carl von Ossietzky University of Oldenburg in Germany.

“The next natural step, on which I’m working, is to get this also for cochlear implants,” said Dietz, who has been at Western’s National Centre for Audiology for three weeks. “This is helpful, that they (hearing aids) are able to talk to each other, in a sense, so the one knows what the other is doing. It seems very natural to do the same for cochlear implants. For the processing, and the first stages of the technology, it’s very similar.”

A cochlear implant is an electronic device that restores partial hearing to individuals with severe-to-profound hearing loss who do not benefit from a conventional hearing aid. It is surgically implanted in the inner ear and activated by a device worn outside the ear. Unlike a hearing aid, it does not make sound louder or clearer. Instead, the device bypasses damaged parts of the auditory system and directly stimulates the nerve for hearing, allowing individuals to receive sound.

In Canada, adults qualify for only one cochlear implant, while children are given two, to assist with speech development. Even when implanted in both ears, the devices remain independent.

Cochlear implants are “a miracle” for a deaf person, Dietz said. Therefore, he, and others in the field, continue to push for increased government funding for dual cochlear implants, which would allow for substantial hearing improvement.

“With one device, you are just not getting it. When you have a second device, one of the two is always closer to sounds and where they are coming from.”

As the technology around the devices improves, so do expectations, including the ability to localize sounds. Localization is the ability to detect and determine the source of a sound, like pinpointing the exact location of a bird twittering in the trees 300 feet away, for example. It is an essential part of the listening experience.

“For example, you go on the street and you hear a car fast approaching. You want to know on what side the car is coming from, because it’s a danger,” Dietz said. “If you have just the one device, you cannot localize it. The second implant helps, but that person is still much worse off than normal-hearing persons are. This is partly due to the fact the two implants don’t speak to each other. There is no reason why they shouldn’t.”

Working with implant surgeons at London Health Sciences, along with the Hospital for Sick Children in Toronto, Dietz is confident his research will become a reality within the next five years.