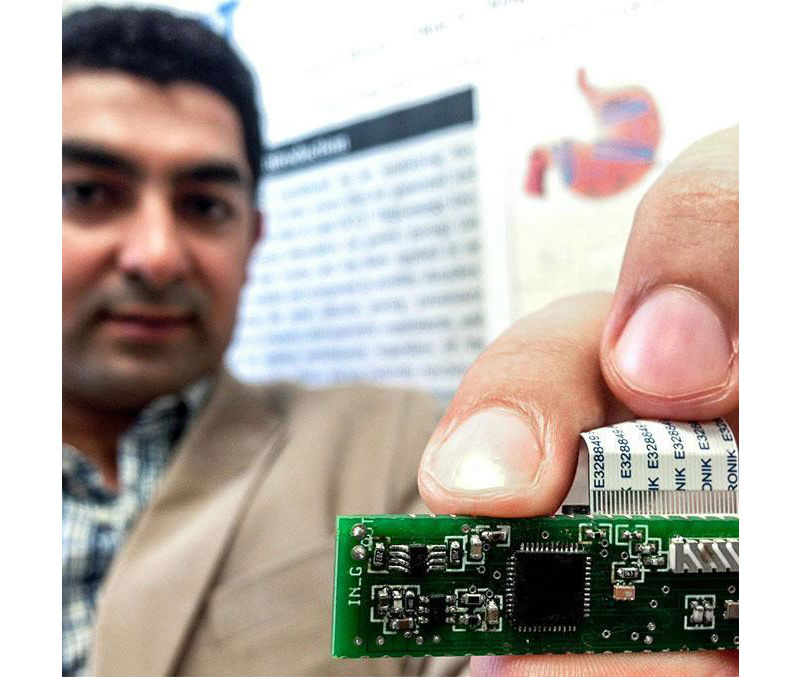 Farajidavar’s research aims to create a safe method to monitor the electrical impulses producing rhythmic movements and contractions in the stomach that are central to gastric health and good digestion. Problems with gastric movements, called dysrhythmias, lead to disorders that prevent the stomach from digesting food normally, leading to other problems with blood sugar levels, nutrition absorption, and painful cramps.

“Right now, we have no adequate way to record the gastric signals that allow us to understand what may be happening in a patient’s stomach,” says Farajidavar. “External devices placed on the surface of the belly don’t always pick up the stomach’s signals or the signal recording is disrupted if the patient moves a certain way.”

Farajidavar’s tiny device is designed to be implanted in a patient during an endoscopy, a procedure in which doctors use a flexible tube to examine the digestive tract. Surgeons would insert the device by opening a small flap inside the stomach. Once implanted, the chip would transmit data on the stomach’s so-called “slow waves” to a small patch worn on the skin. The patch, in turn, would transfer the data to a unit allowing doctors to map and monitor the stomach’s electrical activity. The system is known as WINGS (Wireless Implantable NeuroGastroenterology System). The implant will be wirelessly recharged through the patch, potentially allowing it to stay in the body for a month or more.

“Once we know more about these gastric waves and signals, scientists can develop special therapies, similar to heart pacemakers, for patients suffering from gastric disorders,” says Farajidavar. “In the field of cardiology, these technologies have helped revolutionize diagnosis and treatment of heart issues. The same thing is possible for the stomach conditions but only if we have ways to monitor gastric signals in long-term studies.”

The device in Farajidavar’s study will first be tested in animals. He is developing it within the Entrepreneurship and Technology Innovation Center (ETIC) at NYIT School of Engineering and Computing Sciences.

“Federal research funding helps our doctors, scientists and engineers by giving them the critical resources they need to improve the quality of life for patients around the world,” said Rep. Steve Israel. “I am thrilled that Assistant Professor Farajidavar and NYIT are continuing the vital work that has positioned Long Island as a national hub for medical research.”

Farajidavar’s grant is part of an NIH initiative dedicated to investigating the workings of peripheral nerves, which are those nerves outside of the brain and spinal cord. The SPARC (Stimulating Peripheral Activity to Relieve Conditions) program seeks to fund projects that reveal information about how peripheral nerves control the body’s organs.

“SPARC hopes we share the technology and we can get in into clinical trials in a few years,” says Farajidavar. “We’re honored to be among the first responders to this initiative.”