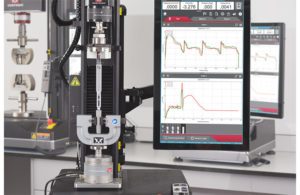 Recently redesigned to take advantage of the latest functionality offered by the new Instron 6800 series, this system offers a simpler, safer, and more intuitive user experience, according to Norwood, Mass.-based Instron.

Instron introduced the Torsion Add-On product line in 2015 to test a variety of medical devices, electronics, consumer products and packaging. Its ability to perform axial, torsion and simultaneous axial-torsion testing enables it to simulate real-world use of products and components in a testing environment, the company said. It also meets the requirements of a variety of international testing standards, including ISO 11040-4, ISO 80369, and ASTM F543.

As part of the redesign, Instron has improved the durability and usability of the product for both 6800 and 5900 systems. The incorporated mechanical changes result in increased rotary performance and stiffness and reduced rotary backlash. Rotary direction icons are coordinated between the motor, handset, and
software to provide clarity on clockwise and counterclockwise directions and avoid inadvertent damage to specimens or fixtures. Bluehill Universal materials testing software provides fully integrated control of the rotary axis, including a new rotate to angle feature. The Torsion Add-On 3.0 can be added to any new or existing 6800 or 5900 series universal testing system.