Bathing a patient in LED light may someday offer a new way to locate tumors, according to Rice University researchers.

The spectral triangulation system developed by Rice chemist Bruce Weisman and his colleagues is intended to pinpoint targeted cancer tumors tagged with antibody-linked carbon nanotubes. It is described in a paper in the Royal Society of Chemistry journal Nanoscale.

Because the absorption of short-wave infrared light in tissues varies with its wavelength, spectral analysis of light coming through the skin can reveal the depth of tissue through which that light has passed. This allows the three-dimensional coordinates of the nanotube beacon to be deduced from a small set of noninvasive optical measurements. 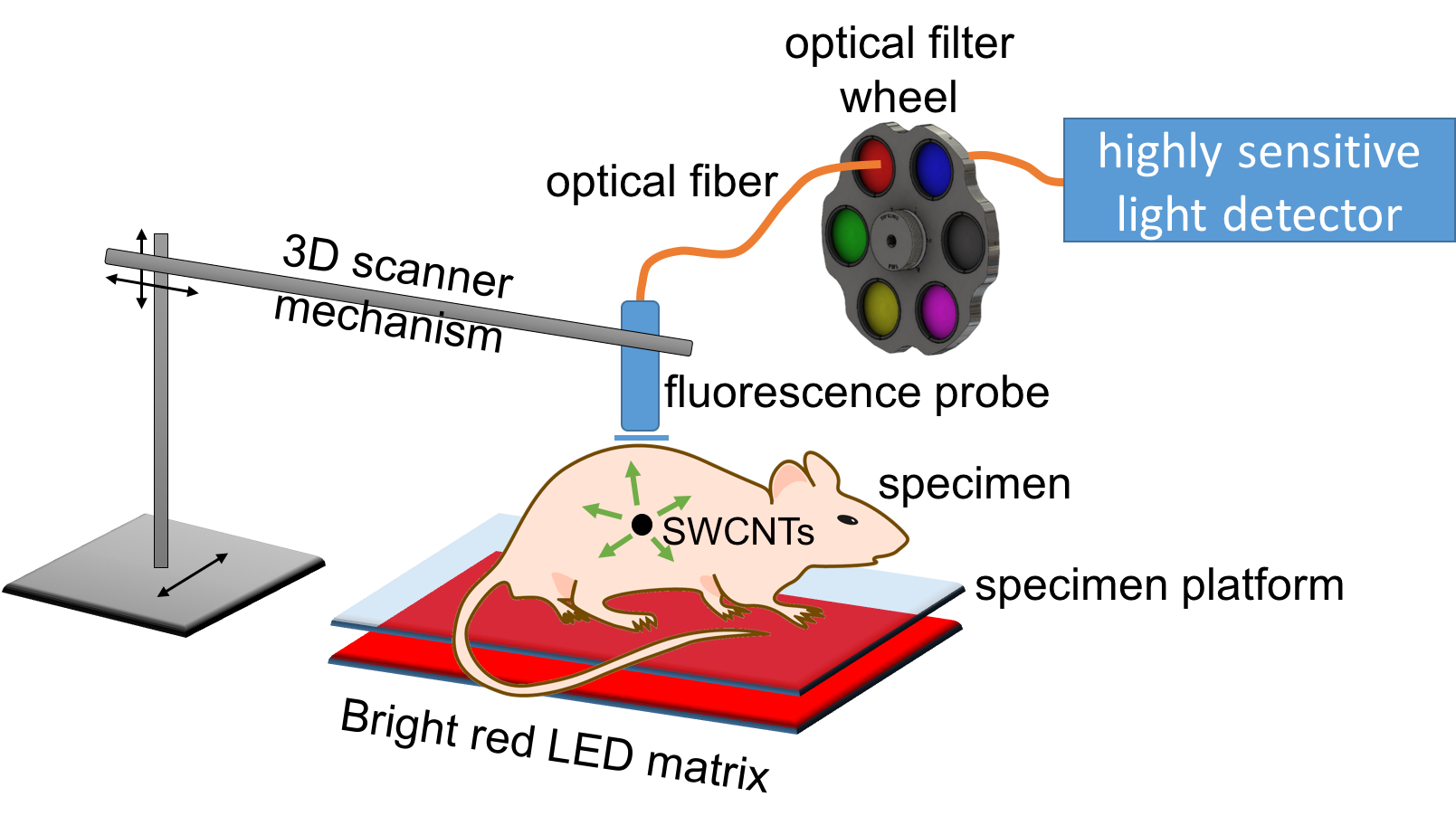 A new Rice University method for medical imaging uses strong light from an LED array and an avalanche photodiode detector to pinpoint the location of tumors that have been tagged by antibody-targeted carbon nanotubes. The method can detect fluorescence from single-walled carbon nanotubes (SWCNTs) through up to 20 millimeters of tissue. (Credit: Weisman Lab/Rice University)

The Rice technique relies on the fact that single-walled carbon nanotubes naturally fluoresce at short-wave infrared wavelengths when excited by visible light. A highly sensitive detector called an InGaAs (indium gallium arsenide) avalanche photodiode made it possible to read faint signals from nanotubes up to 20 millimeters deep in the simulated tissue used for lab tests.

“We’re using an unusually sensitive detector that hasn’t been applied to this sort of work before,” said Weisman, a recognized pioneer for his discovery and interpretation of near-infrared fluorescence from single-walled nanotubes.

“This avalanche photodiode can count photons in the short-wave infrared, which is a challenging spectral range for light sensors. The main goal is to see how well we can detect and localize emission from very small concentrations of nanotubes inside biological tissues. This has potential applications in medical diagnosis.”

Using light-emitting diodes to excite the nanotubes is effective — and inexpensive, Weisman said. “It’s relatively unconventional to use LEDs,” he said. “Instead, lasers are commonly used for excitation, but laser beams can’t be focused inside tissues because of scattering. We bathe the surface of the specimen in unfocused LED light, which diffuses through the tissues and excites nanotubes inside.”

A small optical probe mounted on the frame of a 3D printer follows a computer-programmed pattern as the probe gently touches the skin to make readings at grid points spaced a few millimeters apart.

Before reaching the detector, light from the nanotubes is partly absorbed by water as it travels through tissues. Weisman and his team use that to their advantage. “A two-dimensional search tells us the emitter’s X and Y coordinates but not Z — the depth,” he said. “That’s a very difficult thing to deduce from a surface scan.” 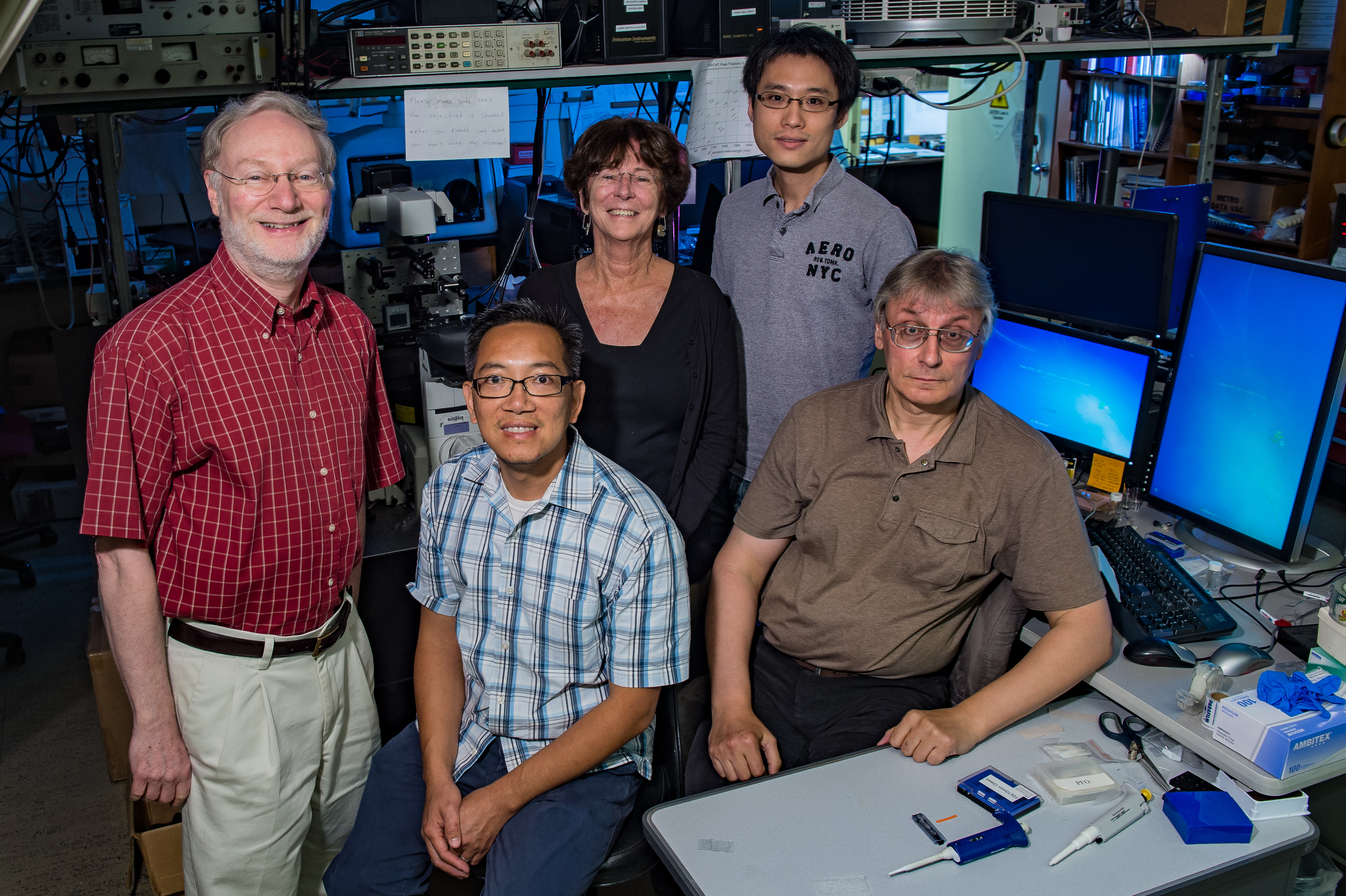 Spectral triangulation overcomes the limitation. “We make use of the fact that different wavelengths of nanotube emission are absorbed differently going through tissue,” Weisman said. “Water (in the surrounding tissue) absorbs the longer wavelengths coming from nanotubes much more strongly than it does the shorter wavelengths.

“If we’re detecting nanotubes close to the surface, the long and the short wavelength emissions are relatively similar in intensity. We say the spectrum is unperturbed.

“But if the emission source is deeper, water in that tissue absorbs the longer wavelengths preferentially to the shorter wavelengths,” he said. “So the balance between the intensities of the short and long wavelengths is a yardstick to measure how deep the source is. That’s how we get the Z coordinate.”

The detector is now being tested in the lab of Dr. Robert Bast, an expert in ovarian cancer and vice president for translational research at the University of Texas MD Anderson Cancer Center.

“It gives us a fighting chance to see nanotubes deeper inside tissues because so little of the light that nanotubes emit finds its way to the surface,” Weisman said. “We’ve been able to detect deeper into the tissues than I think anyone else has reported.”