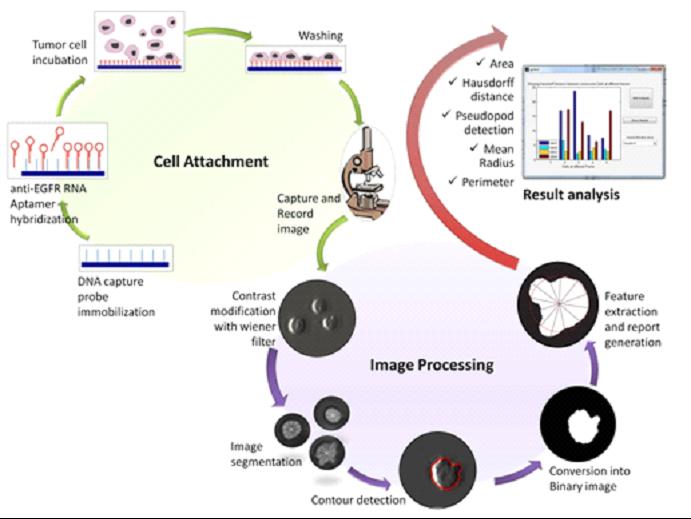 The molecule binds to the overexpressed cancer receptors on the cells. Cells show distinct behavior when bound to the surface. This behavior is quantified with image processing. (Credit: TECHNOLOGY)

A team of researchers from the University of Texas at Arlington (UT-Arlington) in Texas, USA has demonstrated a novel cancer cell detection method based on real time cell behavior tracking on engineered surfaces. A synthetic RNA molecule is coated on chip surface to identify cancer cells. The otherwise “calm and quiet” cells on this surface show interesting dancing behavior when their membrane receptors are matched to the surface RNA molecules. The behavior is quantified using interesting image processing techniques. Cancer cells are shown to demonstrate significantly different behavior than regular healthy cells. This phenomenon has potential to detect cancer in a tabletop setup thus leveraging doctors to perform frequent and economic tests with faster results and better disease prediction. The report appears in the December 2015 issue of the journal TECHNOLOGY.

Cell motility is a phenomenon, where cells move by protruding and contracting sections of the membrane. This is a complex process performed through sophisticated balancing act between internal cytoskeleton structure and the cell membrane proteins. Cancer cells are known to be abnormally flexible than the healthy cells, primarily due to their inherent weak structures. The forces between the cytoskeleton and the cell surface proteins are different between cancerous and healthy cells. The surface receptors are also abnormally many more on the surface of cancer cells. The human glioblastoma (hGBM) cells thus showed distinctly enhanced cell movements and activity on the RNA functionalized chips.

“The initial results that are shown here hold great potential for applications like cancer screening. A multiple chip based device targeting several proteins can lead to a generic cancer diagnostic platform. The advantage of the technology compared to others is that it is suitable for a quick diagnosis Once matured, the method has potential to serve as an additional modality to identify tumor cells based on their physical behavior from blood samples or biopsy specimen directly drawn from patients.” says Professor Samir Iqbal, Ph.D., of the UT Arlington and Principal Investigator on the paper.