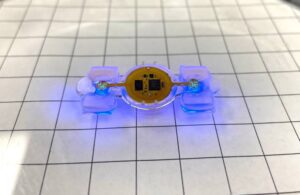 In a post on the University of Illinois website, they described them as centimeter-scale biological machines. They published their research in the journal Science Robotics.

“Integrating microelectronics allows the merger of the biological world and the electronics world, both with many advantages of their own, to now produce these electronic biobots and machines that could be useful for many medical, sensing and environmental applications in the future,” said study co-leader Rashid Bashir, an Illinois professor of bioengineering and dean of the Grainger College of Engineering.

Mouse muscle tissue, grown on a soft 3D-printed polymer skeleton, powers the small biobots. Bashir’s group demonstrated walking biobots in 2012 and light-activated biobots in 2016. Despite garnering some control from light activation, researchers found limitations in delivering light pulses to biobots outside of a lab setting.

“This unusual combination of technology and biology opens up vast opportunities in creating self-healing, learning, evolving, communicating and self-organizing engineered systems,” said Rogers, a professor of materials science and engineering, biomedical engineering and neurological surgery at Northwestern University and director of the Querrey Simpson Institute for Bioelectronics. “We feel that it’s a very fertile ground for future research with specific potential applications in biomedicine and environmental monitoring.”

How the researchers developed the biobot

The researchers aimed to eliminate bulky batteries and tethering wires. This gives the biobots freedom of movement needed for practical applications. Co-first author Zhenwei Li said the eBiobots use a receiver coil to harvest power and provide a regulated output voltage to power the micro-LEDs. Li serves as an assistant professor of biomedical engineering at the University of Houston.

According to the post, the researchers can send a wireless signal to the eBiobots that prompts the LEDs to pulse. These LEDs then stimulate the light-sensitive engineered muscle to contract. This moves the polymer legs so machines can “walk.” The researchers said the micro-LEDs can activate specific portions of muscle to make the eBiobot turn in their desired direction.

Computational modeling optimized the biobot’s design. Mattia Gazzola, professor of mechanical sciences and engineering at Illinois, led the simulation and design process. The iterative design and additive 3D printing of its scaffolds allows for “rapid cycles of experiments and performance improvement,” according to Gazzola.

Future uses for the technology could include chemical and biological sensors or 3D-printed scaffold parts. Integrating electronic sensors or biological neurons allows eBiobots to sense and respond to toxins in the environment, biomarkers for disease and more.

“In developing a first-ever hybrid bioelectronic robot, we are opening the door for a new paradigm of applications for health care innovation, such as in-situ biopsies and analysis, minimum invasive surgery or even cancer detection within the human body,” Li said.

The National Science Foundation and the National Institutes of Health supported this work.

Tell Us What You Think! Cancel reply