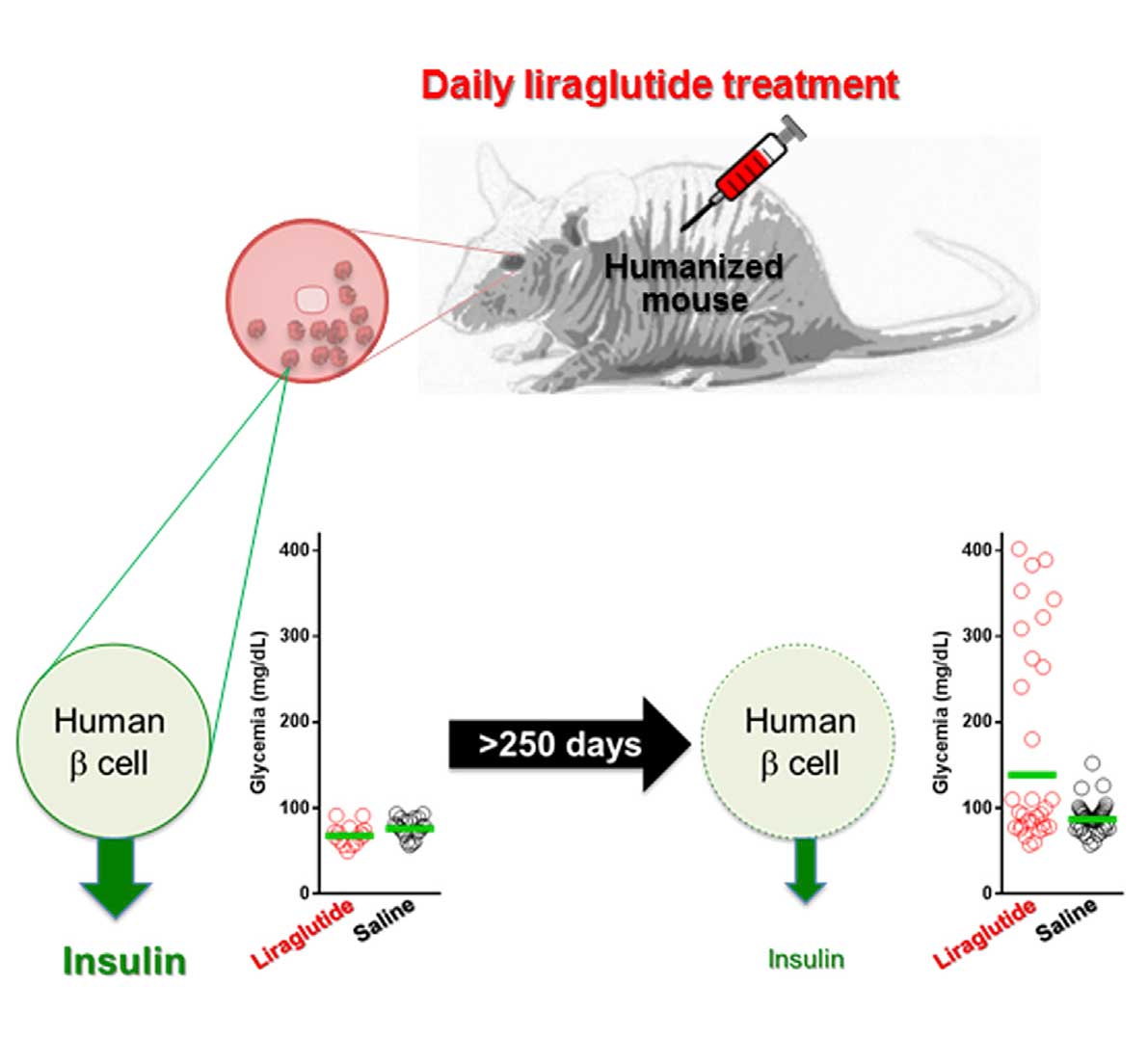 A drug used by people with type 2 diabetes to regulate blood sugar led to pancreatic beta cell burnout in mice exposed to high doses over a period of six months. The study, published February 11 in Cell Metabolism, adds to the continuing conversation about the long-term effects of liraglutide and similar drugs on the pancreas. However, more research is needed to assess the potential safety of continuing treatment with these drugs.

Liraglutide is one of a relatively new family of drugs that work by mimicking the effects of a hormone, called glucagon-like peptide-1 (GLP-1), naturally secreted by the intestine after eating to help stabilize blood sugar levels. Based on studies in rodents, these drugs—also called incretin mimetics—may also improve insulin release and prevent the loss of insulin-producing beta cells, meaning they could potentially help slow down the progression of type 2 diabetes. With all of this promise, reports of side effects made researchers look at the safety of their long-term use.

Midhat Abdulreda and Per-Olof Berggren of the of University of Miami Miller School of Medicine Diabetes Research Institute used humanized mice—mice with human pancreatic islets transplanted in the back of the eye—as a testing ground for incretin mimetics. Mice with diabetes were subjected to liraglutide treatment for over 200 days, and effects on human beta cells were evaluated. This revealed an unexpected effect in that the human pancreatic cells eventually stopped releasing insulin, raising concerns about beta cell function after extended exposure to the drug.

“Given the ethical and practical limitations in conducting research in human subjects, we hope that this study highlights the utility and versatility of our new model, which enables studying human pancreatic islets longitudinally under different experimental conditions in vivo,” says Berggren, also of Karolinska Institutet. “It is important, however, to note that further studies are needed to corroborate our findings.”

Whether a similar pancreatic beta cell burnout could take place in patients is unknown, and due to the expense and invasiveness of the procedures needed to find out, it may not be something that is easy to learn. Using the humanized mouse model, the researchers next plan to investigate the effect of incretin mimetics with various anti-diabetic drug combinations on human pancreatic cells from healthy donors and people with type 2 diabetes.

“Although we are not medical practitioners, it is our opinion that doctors should always have an honest discussion with their patients about potential side effects of the treatment options they are suggesting,” says Abdulreda. “Although our current preliminary findings point to potentially undesirable consequences of chronic daily liraglutide treatment, it is too early to change the standard of care.”

“It is also important to note that there are many patients with type 2 diabetes who never achieve their therapeutic goals despite trying all available options of treatment,” Berggren adds. “Thus, it is essential to recognize the need for continued research and to be receptive of emerging new and improved approaches to treat this multifaceted disease.”