Chemotherapy isn’t supposed to make your hair fall out — it’s supposed to kill cancer cells. A new molecular delivery system created at U of T Engineering could help ensure that chemotherapy drugs get to their target while minimizing collateral damage.

Many cancer drugs target fast-growing cells. Injected into a patient, they swirl around in the bloodstream acting on fast-growing cells wherever they find them. That includes tumors, but unfortunately also hair follicles, the lining of your digestive system, and your skin. 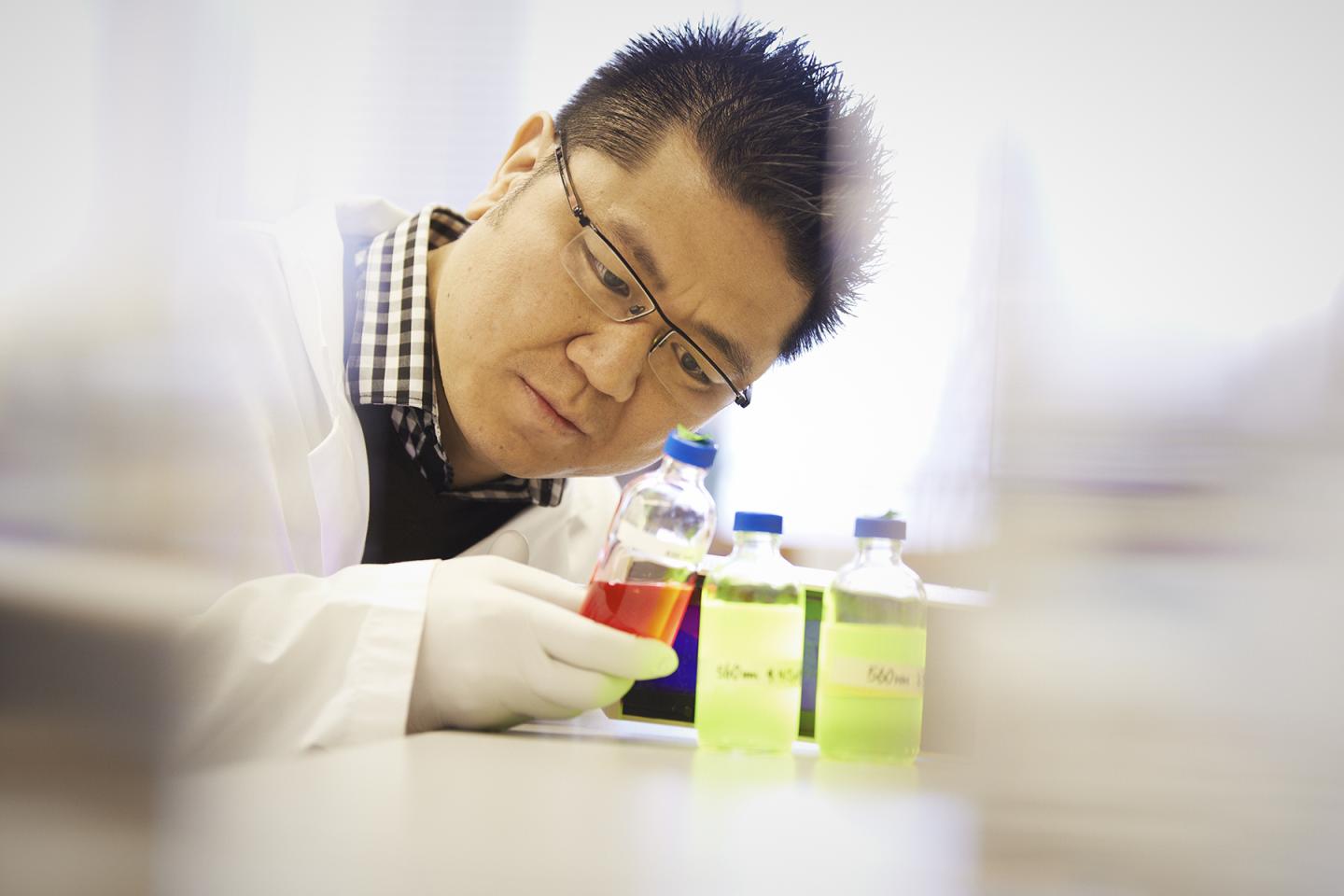 U of T Engineering professor Warren Chan has spent the last decade figuring out how to deliver chemotherapy drugs into tumours — and nowhere else. Now his lab has designed a set of nanoparticles attached to strands of DNA that can change shape to gain access to diseased tissue. (Credit: NSERC)

U of T Engineering Professor Warren Chan has spent the last decade figuring out how to deliver chemotherapy drugs into tumors — and nowhere else. Now his lab has designed a set of nanoparticles attached to strands of DNA that can change shape to gain access to diseased tissue.

“Your body is basically a series of compartments,” says Chan. “Think of it as a giant house with rooms inside. We’re trying to figure out how to get something that’s outside, into one specific room. One has to develop a map and a system that can move through the house where each path to the final room may have different restrictions such as height and width.”

One thing we know about cancer: no two tumors are identical. Early-stage breast cancer, for example, may react differently to a given treatment than pancreatic cancer, or even breast cancer at a more advanced stage. Which particles can get inside which tumors depends on multiple factors such as the particle’s size, shape and surface chemistry.

Chan and his research group have studied how these factors dictate the delivery of small molecules and nanotechnologies to tumors, and have now designed a targeted molecular delivery system that uses modular nanoparticles whose shape, size and chemistry can be altered by the presence of specific DNA sequences.

“We’re making shape-changing nanoparticles,” says Chan. “They’re a series of building blocks, kind of like a LEGO set.” The component pieces can be built into many shapes, with binding sites exposed or hidden. They are designed to respond to biological molecules by changing shape, like a key fitting into a lock.

These shape-shifters are made of miniscule chunks of metal with strands of DNA attached to them. Chan envisions that the nanoparticles will float around harmlessly in the blood stream, until a DNA strand binds to a sequence of DNA known to be a marker for cancer. When this happens, the particle changes shape, then carries out its function: it can target the cancer cells, expose a drug molecule to the cancerous cell, tag the cancerous cells with a signal molecule, or whatever task Chan’s team has designed the nanoparticle to carry out.

Their work was published this week in two key studies in the Proceedings of the National Academy of Sciences and the leading journal Science.

“We were inspired by the ability of proteins to alter their conformation — they somehow figure out how to alleviate all these delivery issues inside the body,” says Chan. “Using this idea, we thought, ‘Can we engineer a nanoparticle to function like a protein, but one that can be programmed outside the body with medical capabilities?'”

Applying nanotechnology and materials science to medicine, and particularly to targeted drug delivery, is still a relatively new concept, but one Chan sees as full of promise. The real problem is how to deliver enough of the nanoparticles directly to the cancer to produce an effective treatment.

“Here’s how we look at these problems: it’s like you’re going to Vancouver from Toronto, but no one tells you how to get there, no one gives you a map, or a plane ticket, or a car — that’s where we are in this field,” he says. “The idea of targeting drugs to tumors is like figuring out how to go to Vancouver. It’s a simple concept, but to get there isn’t simple if not enough information is provided.”

“We’ve only scratched the surface of how nanotechnology ‘delivery’ works in the body, so now we’re continuing to explore different details of why and how tumors and other organs allow or block certain things from getting in,” adds Chan.

He and his group plan to apply the delivery system they’ve designed toward personalized nanomedicine — further tailoring their particles to deliver drugs to your precise type of tumor, and nowhere else.