A simple tool designed for inserting an intrauterine device may offer women in the developing world a convenient, low-cost option for long-term contraception.

Practitioners can easily and effectively use the device in low-resource settings to place an IUD in women just after they’ve given birth, according to a pilot study led by a Stanford University School of Medicine researcher.

Paul Blumenthal, MD, professor of obstetrics and gynecology, collaborated with colleagues at Population Services International to invent the device, the first of its kind. It consists of a long tube of silicone and plastic, preloaded with an IUD, that can be inserted into the top portion of the uterus, where it may provide contraceptive protection for as long as 10 years. 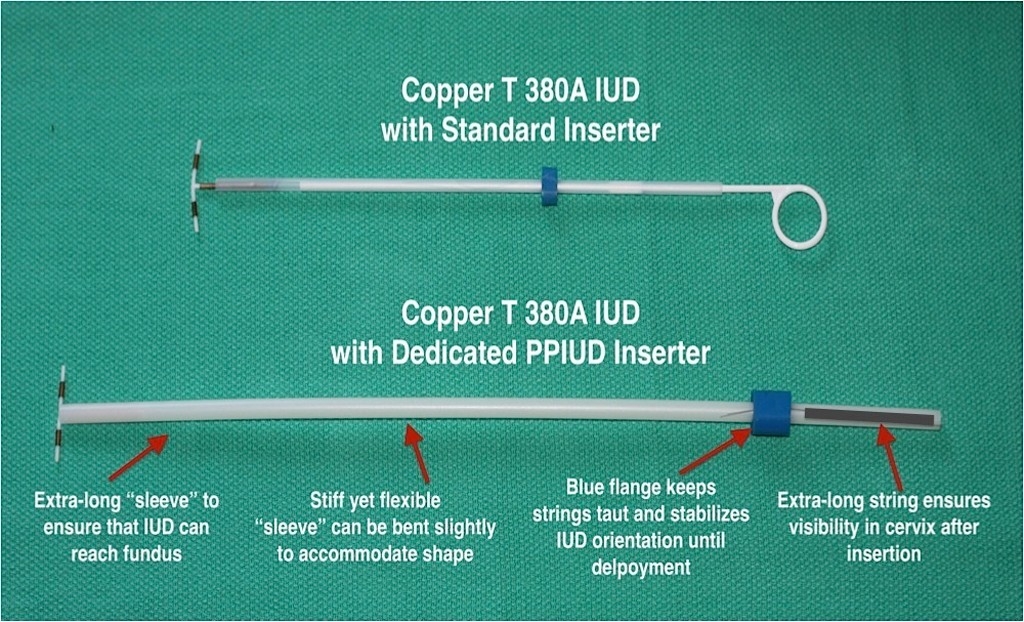 The new IUD inserter (below) that was tested in India is longer than a standard inserter (top) and has an extra-long string to help physicians and patients be sure that the device is in place.

“It’s simple, it works and it’s cheap,” Blumenthal said. “This is something that could really enhance the providers’ willingness and the patients’ acceptability of this approach.”

He and his colleagues at PSI-India tested the inserter device in 80 women in India, who said placement of the IUD caused them little or no additional pain compared with the birth of their child. The procedures were done by 11 trained health-care providers, 93 percent of whom reported it to be an easy process. The women all consented to the procedure and received counseling about the various options for postpartum contraception and the health benefits of spacing pregnancies.

The results of the pilot study was published online March 23 in Global Health Science and Practice. Blumenthal is the senior author.

Ideal Time for Getting IUD
Many women say they do not want to get pregnant in the 18 months after childbirth, but more than 60 percent lack access to family-planning services, according to studies. The time just after delivery is ideal for inserting an IUD because the cervix is open, so there is less discomfort for the woman and fewer side effects than a procedure done weeks later, he said. It also saves the woman from having to go back to the clinic for family planning — an important advantage in a developing country where travel time, cost and other factors may discourage a return visit, he said.

“The postpartum period is underutilized by women as a time to start their next method of contraception,” Blumenthal said. “It’s important for women to space births, but many give birth and never come back for family planning. Then the next time we see them, they are pregnant again, very often with a pregnancy that was unplanned.”

Having an IUD provided just after delivery, he said, is “an opportunity for ‘one-stop shopping’ that is very convenient.”

Risks of Traditional Insertion
The IUD is a slender, T-shaped device, typically containing copper, which is inserted into the uterus and is considered the most effective form of reversible birth control. Blumenthal said that until now, IUDs typically have been placed manually or by using a long forceps. In manual insertions, practitioners have to remove the IUD from a package and position it on their fingers before placing it into a woman’s uterus by inserting their whole hand to the top of the uterus. But this technique can be uncomfortable for the woman and carries a risk of infection and contamination, particularly in low-resource countries where gowns and gloves aren’t always available or sterile. Moreover, in areas of high HIV prevalence, the process can put health-care providers at risk for viral exposure.

The other method of IUD placement involves use of a forceps, in which the provider grasps the IUD with the forceps and then places it into the uterus. This method also carries a risk of infection and contamination, as the IUD has to be manually removed from the package, positioned at the tip of the forceps and then inserted to the top of the uterus. The forceps must be sterilized between uses, too. Moreover, in the process, the practitioner may damage the IUD by squeezing it too tightly, Blumenthal said.

IUDs installed through the older two methods also have a relatively short string that can’t be seen immediately after insertion, so the woman can’t tell if the device is in place or has been expelled, he said.

Advantages of New Device
The new device carries the same copper, T-shaped IUD, except that it has a longer string. It is preloaded in a long, slender tube, so it can be installed in what Blumenthal calls a simple “grab and go” procedure. The longer string enables the woman or her provider to be assured that it is in place.

In the study, he and colleagues from PSI tested the device between March and July 2015 in 80 volunteers, the majority of them in their 20s, at two government-run clinics in Delhi and Lucknow. About half the IUDs were installed within an hour after delivery, and 26 percent were placed within six hours. Blumenthal said the devices can be inserted up to 48 hours after delivery. After placement, the researchers used abdominal ultrasound to confirm the IUDs had reached the proper position in the uterus.

When the women were asked about their pain levels during the procedure, 74 percent said that, compared to giving birth, there was no increase in pain. Seventeen percent reported a decrease in pain, and 9 percent reported an increase. In a follow-up clinic visit, all of them said the experience was a positive one, with 100 percent reporting that their providers met or exceeded their expectations.

One problem with IUDs is that the body may expel them without the woman’s knowledge. Conventional IUDs are expelled in about 3 percent of cases. In the study, the rate of expulsion was slightly higher — between 5 and 10 percent — which was not surprising, as the uterus is larger and the cervix open after delivery, Blumenthal said. What was important in the study is that the women realized when the IUDs had fallen out, he said.

Costs about $1
At about $1, the device is also cost-effective. A forceps alone may cost between $70 and $100, not including the cost of sterilizing it between each use, he said.

The same researchers are now testing the simplified inserter in a randomized, controlled trial in India to compare its effectiveness with the more conventional forceps approach, he said.

He said an Indian company, Pregna International, which refined and manufactured the device for the pilot study, is keen to bring it to market.