The flexibility of this technology allows new techniques and technologies to be implemented at a low cost and without requiring hardware modifications. 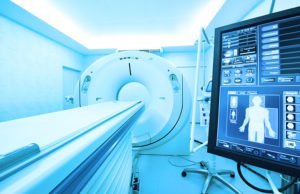 (Shutterstock image courtesy of Per Vices)

SDR-based architectures yield clear image reconstructions and high diagnostic confidence. Employing commercial off the shelf (COTS) SDR systems lowers the overall cost of developing diagnostic solutions and reduces the lead times required for their development, benefiting both the medical industry and the patient. 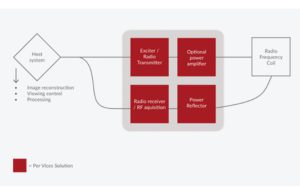 A typical imaging setup includes a computer system and an SDR platform. The computer controls the function of the system while the SDR platform is typically used for signal processing and transmitting and receiving signals. A basic SDR architecture consists of a radio front end, an analog-to-digital converter (ADC), a digital-to-analog converter (DAC) and a digital signal processor (DSP).

SDR-based systems can operate reliably and accurately over a large bandwidth and frequency spectrum, making them a good platform to host ultra-wideband (UWB) wireless technology, which is becoming increasingly popular in hospital environments. A medical imaging system is considered UWB when the range of its operating frequency is greater than 500 MHz. The higher frequencies resolve the finer structures, while the lower frequencies resolve larger structures and provide contrast to the reconstructed image. This means that the entire band of operation is vital to extract as much information from the imaging to create an accurate reconstruction.

In hospital environments, large numbers of medical imaging devices are expected to coexist within a confined space, but traditional radio devices are highly susceptible to RF interference. Interference lowers the performance of radio systems and limits the number of devices that can coexist in a given space.

The SDR paradigm uses MIMO (multiple input, multiple output) technology to maximize the number of devices that can coexist in a given space. This technology allows multiple receiver/transceiver channels, enabling multiple signals to be transmitted and/or received while limiting the interference between the channels.

Unlike direct sampling, the I/Q sampling approach — which SDR-based systems use — helps to simplify the implementation of a signal processing system. Moreover, the cost of software-based mixing and filtering components required when using I/Q data is low. Using I/Q data in medical imaging reduces the cost of developing diagnostics tools and also enhances their upgradability.

Advantages of SDR in medical diagnostics

Sophisticated medical imaging systems based on dedicated hardware components can be difficult to upgrade. The lack of update capabilities and the single-use applications of these devices cause relatively quick obsolescence and require entirely new systems to replace them.

The SDR paradigm’s software-based components can be upgraded by reprogramming the software in the DSP subsystem. This subsystem is commonly implemented using a field-programmable gate array (FPGA) or an application-specific integrated circuit (ASIC). The reprogrammability of SDR systems makes it easy to upgrade and integrate into any system.

In addition, SDRs can have a huge impact in non-contact medical imaging. This is an important technology especially for vulnerable patients, such as infants and burn victims, because it enables the acquisition of vital signals from the patients without making physical contact. SDR systems are suitable for this application because of the flexibility in configuration, repeatability and impressive SNR these systems possess.

Brandon Malatest is COO and co-founder of Toronto-based software defined radio company Per Vices. He has an honor’s degree in Physics with a specialization in Experimental Physics from the University of Waterloo in Ontario, Canada.