BOSTON (AP) — In the five years since the Boston Marathon bombing, medical science has made promising advances in amputations and artificial limbs, in part because of lessons learned from the victims and research dollars made available as a result of the attack.

Some of the 17 people who lost limbs in the April 15, 2013, bombing could, like many other amputees, benefit from these developments, since many are coming to a crossroads in their treatment. A number still struggle with pain, and others may be looking to replace their prostheses, which are approaching the end of their useful life.

“The collective experience in the aftermath of the Boston Marathon bombing was a very positive one in the medical community because there was a lot of crosstalk between military and civilian surgeons,” said Dr. Benjamin Potter, chief of orthopedics at Walter Reed National Military Medical Center in Maryland, where three survivors were treated and doctors are attempting some of the cutting-edge procedures. 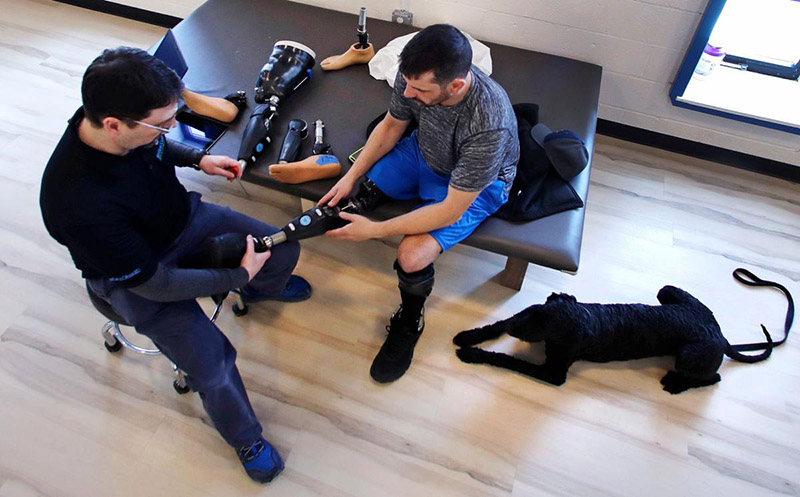 In this March 20, 2018 photo, prosthetist John Warren attaches a foot to Marc Fucarile’s microprocessor controlled prosthetic knee during a visit to the Medical Center Orthotics and Prosthetics in the Allston neighborhood of Boston. In the five years since the Boston Marathon bombing, medical science has made promising advances in amputations and artificial limbs. (AP Photo/Charles Krupa)

“That exchange and that dialogue has been one of the silver linings to have come out of this, in that we’re hopefully better educated and better prepared for the next one.”

Among other places where research is taking place is Boston, where doctors are working to combine an improved amputation method with more sophisticated artificial limbs so that amputees can one day use their brains to control their prostheses.

The project grew out of lessons learned by Boston doctors treating victims of the marathon attack. It also was made possible by $200,000 in seed funding from the Gillian Reny Stepping Strong Center for Trauma Innovation , a foundation launched by the family of a bombing survivor treated at Brigham & Women’s Hospital.

“One of the things the bombings crystallized for me was the need to improve amputations,” said Dr. Matthew Carty, a Brigham & Women’s surgeon who is developing the new amputation technique. “We’ve made amazing advances in prosthetics technology — really by leaps and bounds — but the way we do amputations hasn’t kept up to speed with the capabilities that exist now.”

The new lower-leg amputation technique, which has so far been done on seven people, preserves tendons normally severed during an amputation. Tendons connect muscles to bone and are necessary to move one’s limbs.

The hope is that researchers at the Massachusetts Institute of Technology can then develop technology that will translate brain signals into movement of an artificial leg. Amputees might one day even be able to perceive sensations through their prostheses.

“We’re systematically redesigning the body along with synthetics in order to maximize communication between the body and the machine,” said Hugh Herr, co-director of the Center for Extreme Bionics at MIT and a partner with Carty on the project. “It’s remarkably exciting.”

While the fruits of that work may be years in the future, marathon survivors might also benefit from other encouraging developments.

One procedure involves directly connecting artificial limbs to bones using titanium implants. These bone-anchored prostheses have been placed on hundreds of patients in other countries, but it wasn’t until 2015 that the use of the devices was allowed in the U.S.

Roughly 50 such operations have been done in this country, including 16 at Walter Reed, according to Potter.

Brigham & Women’s is also among the U.S. hospitals seeking to do the nation’s first successful leg transplant . The surgical feat has been accomplished in only a few countries, including Spain and Canada.

Bombing survivor Marc Fucarile, who was the last to be released from the hospital, said he is intrigued by the new advances, even if he isn’t in a rush to go under the knife again anytime soon.

The 39-year-old from the Boston area lost his right leg in the blast, and his badly maimed left leg causes him unceasing pain. He fears another amputation might be his only option. 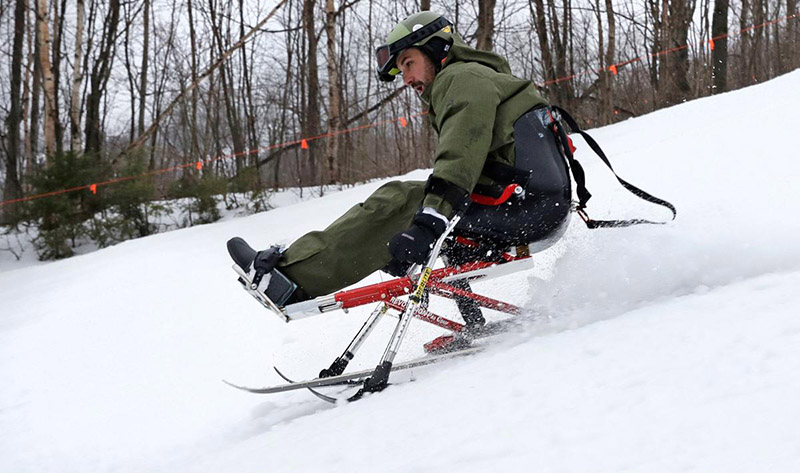 In this March 2, 2018, photo, Boston Marathon bombing survivor Marc Fucarile heads down the North Peak on a mono-ski during “Camp sNOw Limits”, an outing for 23 amputee athletes, at the Sunday River ski resort in Newry, Maine. (AP Photo/Charles Krupa)

The artificial limbs that Fucarile and other survivors were fitted with generally last five to seven years, so the patients will have to decide on the right technology for the next phase of their lives.

“Sometimes the top-of-the-line Porsche isn’t always practical,” said Paolo Bonato, who oversees research on artificial limbs at Spaulding Rehabilitation Hospital in Boston, where many of the victims were treated. “It might be more sensible to have a Honda.”

Rarely seen on civilians five years ago, the prosthetic devices used by many survivors have microprocessors and sensors that automatically adjust the limb and allow for more natural movements. They are now more common, but they can cost anywhere from about $15,000 to more than $100,000, said Spaulding’s Dr. David Crandell.

For some amputees, insurance often isn’t enough to cover the costs. The Boston victims, though, received payouts from a compensation fund, and some have launched fundraising efforts or found other ways to cover their costly devices.

Fucarile, whose carbon fiber and titanium leg was initially developed to help wounded soldiers return to battle, said his prosthesis is no luxury.

“If you’re an insurance company, look at the long-term effect and what you’re saving,” he said. “If I didn’t have my prosthetic leg, I’d probably be overweight, have heart disease, be closer to diabetes and probably be more depressed.” 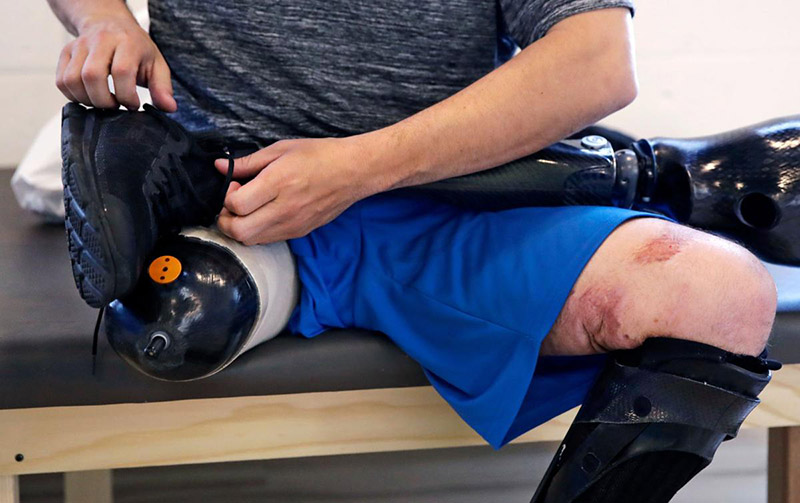 In this March 20, 2018, photo, with scars visible from the explosion and past surgeries, Boston Marathon bombing survivor Marc Fucarile ties his athletic shoe onto a prosthetic foot during a fitting at the Medical Center Orthotics and Prosthetics in the Allston neighborhood of Boston. Fucarile lost his right leg in the blast, and his badly maimed left leg causes him unceasing pain. (AP Photo/Charles Krupa)