In order to better understand important biological membranes, it is necessary to explore new methods. Researchers at Vienna University of Technology (Vienna) have succeeded in creating an artificial placental barrier on a chip, using a high-resolution 3-D printing process.

The placenta has an essential and highly complex task: it must ensure the exchange of important substances between the mother and her unborn child, whilst simultaneously blocking other substances from passing through. Until now, it has not been fully understood what the permeability of the placenta depends on – after all, it is incredibly difficult to investigate its function in humans directly.

For this reason, Vienna University of Technology has now produced an artificial placenta model that very closely resembles the natural organ. Using a specially developed femtosecond laser-based 3-D printing process, it is possible to produce customized hydrogel membranes directly within microfluidic chips, which are then populated with placenta cells. This means it is now possible to provide clarity in some vital research issues, such as the exchange of glucose between mother and child.

“The transport of substances through biological membranes plays an important role in various areas of medicine,” says Prof. Aleksandr Ovsianikov of the Institute of Materials Science and Technology at Vienna University of Technology. “These include the blood-brain barrier, ingestion of food in the stomach and intestine, and also the placenta.” 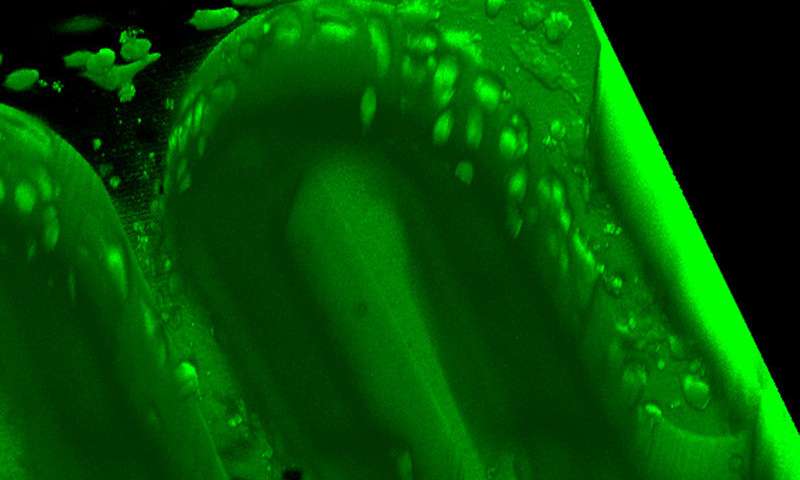 Tiny structures made of bio-compatible material in the 3D-printer at TU Wien. Credit: Vienna University of Technology

There are, for example, numerous studies showing that diseases in the mother such as diabetes can have an impact on the unborn child. High blood pressure can also affect the transport of substances to the foetus. Until now, however, it has been almost impossible to investigate the way in which the many parameters involved interact in such cases.

Special chip with biological partition from the 3-D printer

Researchers at Vienna University of Technology are therefore working on replicating organ structures on compact chips in order to investigate important aspects of their function under controlled conditions. “Our chip consists of two areas – one represents the foetus, the other the mother,” explains Denise Mandt, who worked on the project as part of her thesis. “We use a special 3-D printing process to produce a partition between them – the artificial placenta membrane.” 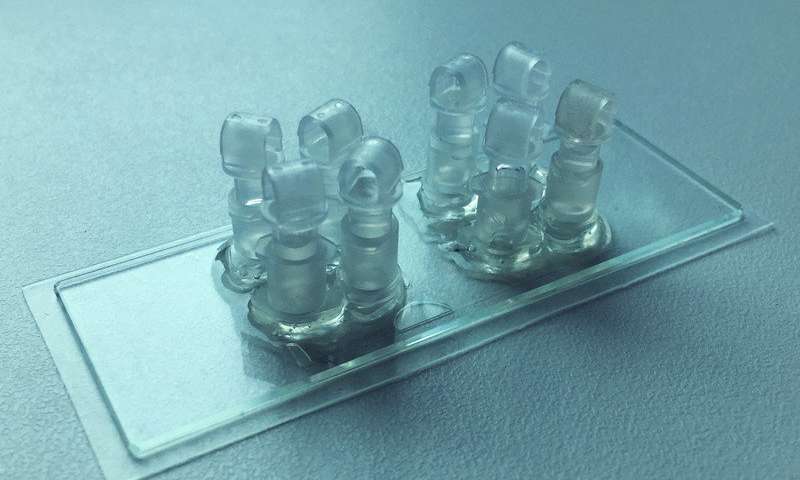 The bio-chip: this is where the placenta can be studied and analysed. Credit: Vienna University of Technology

Vienna University of Technology has been working on high-resolution 3-D printing of this kind for years, with great success: it involves the use of materials which can be solidified with the help of laser beams. This allows the desired 3-D structures to be created point by point with a resolution in the micrometre range. “In our case it involves a hydrogel with good biocompatibility,” Aleksandr Ovsianikov explains. “Based on the model of the natural placenta, we produce a surface with small, curved villi. The placenta cells can then colonise it, creating a barrier very similar to the natural placenta.”

The organ on a chip

“This ‘organ-on-a-chip’ technology is a revolutionary approach in biomedicine, which has generated a great deal of interest in clinical diagnostics, biotechnology and pharmaceutics in recent years,” says Prof. Peter Ertl, head of the cell chip research group which played a key role in the project. “The creation of human mini organs on a chip should allow the development of patient-specific therapeutic approaches, and also represents a vital method for replacing animal experiments.”

Schematics of the artificial placenta. Credit: Vienna University of Technology

On the chip, important biological parameters can be closely monitored, such as the pressure, temperature, geometry and nutrient supply of the mini organs, as well as the administration of medications. This makes it possible to accurately observe disease progression and cure rates.

Initial tests have already shown that the artificial placenta on the chip does in fact behave in a similar way to a natural placenta: small molecules are allowed to pass through, while large ones are held back. The model is now intended to be used specifically to investigate important aspects of nutrient transport from the mother to the foetus.