A new system for monitoring fetal movements in the womb, developed by Imperial researchers, could make keeping an eye on high-risk pregnancies easier.

Monitoring the movements of babies in the womb is crucial to providing medical help when it’s needed. At the moment we rely on mothers-to-be noticing if their child has stopped moving around as much and seeking medical help.

But this isn’t always very reliable and could mean women not seeking help when it’s needed or feeling worried unnecessarily, particularly for high-risk pregnancies, such as situations where the baby isn’t growing as well as it should be.

Dr. Niamh Nowlan, from the Department of Bioengineering at Imperial, said: “The movements of a baby in the womb – fetal movements – are an important sign of the baby’s health. However, there is currently no way to monitor fetal movements outside of a hospital.”

Now, Dr. Nowlan with Dr. Ravi Vaidyanathan, from the Department of Mechanical Engineering, and their collaborators have developed a sensor that can be worn for an extended period of time and tracks the baby through its movements and sound. Their research is published in the journal PLoS One.

Acoustic sensors: About the new research

Dr. Nowlan’s research group focuses on the ways that fetal movements can affect skeletal development and lead to disorders such as hip dysplasia, where the hip joint is too loose. To do so, they needed to be able to track fetal movements throughout a pregnancy, in order to look at and understand conditions as they develop.

To work on technology that could help with this, Dr. Nowlan teamed up with Dr. Vaidyanathan and researchers from the Centre for Fetal Care at the Imperial College Healthcare NHS Trust.

There have been previous attempts to create a system that could be worn over extended periods of time that have relied on accelerometers, which detect movement, but these often couldn’t tell the difference between the movements of the mother and the child. The new technology uses a combination of accelerometers with new acoustic (sound) sensors.

Dr. Nowlan said: “Our device is the first to use acoustic sensors to detect movements. It is also unique in that it can account for movements of the mother, which other previously proposed sensors cannot. We believe that this is a key aspect of the technology which will lead to successful adoption in the clinic and home.”

Widespread use: Hopes for the future

The device was tested for accuracy by checking its results against ultrasounds being run simultaneously, and found to be effective in detecting strong, fast movements of the baby. This sort of technology would be incredibly helpful if developed to the point where it can be used clinically, particularly for high-risk pregnancies. The team hopes to eventually commercialise the now-patented technology.

Dr. Nowlan said: “We are hopeful that this technology could be in widespread use within ten years. Some technical improvements are needed to improve the accuracy of the device, and then we will do a clinical trial to compare the technology against the current gold standard for high risk pregnancies.” 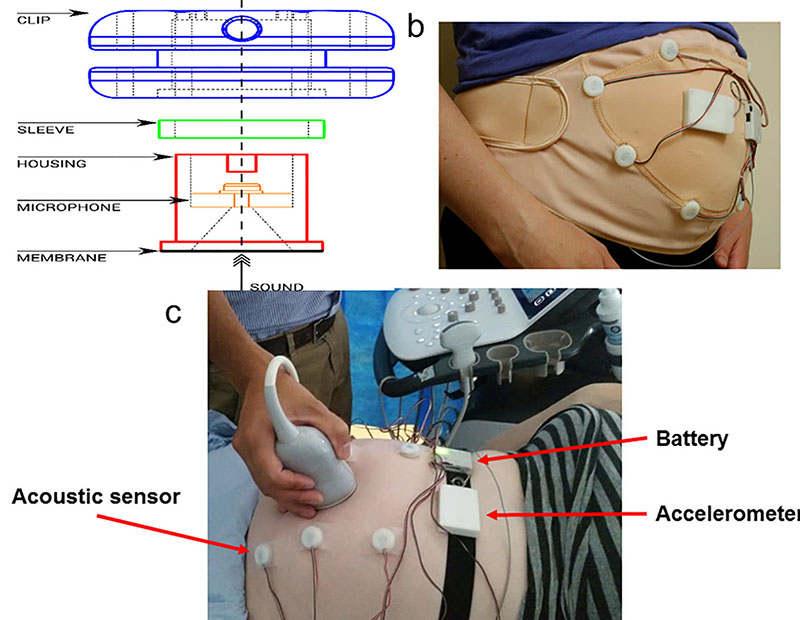