Another stop on my medtech tour of the Netherlands was the University Medical Center in Utrecht (UMC Utrecht). A large section of the medical center is devoted to image sciences, and contains 13 MRI systems ranging from 0.5 Tesla to 7 Tesla power.

Among these systems is MRI-guided radiotherapy, which seeks to improve cancer treatment by improving radiotherapy targeting. Traditionally, CT scans might be used to plan radiotherapy because of a lower cost, but the images can often be tough to see and provide little to no information on the soft tissue. It’s also of the utmost importance that radiotherapy be on target – missing the tumor both complicates treatment and potentially destroys healthy tissue.

MRI provides a better imaging solution for radiotherapy because it makes it easier to see what you treat, including the soft tissue, and the images can be viewed online and basically in real time. But some cancers, for example esophageal and kidney cancer, can be difficult to treat via radiotherapy even with MRI guidance. A tumor on a kidney is going to move around a lot, because it’s close to organs like the bladder that constantly grow and shrink, and the tumor’s position will change throughout the day.

UMC Utrecht has addressed this by introducing vector plotting into its MRI scans. This way the exact movement of the tumor can be tracked, along with areas that remain consistent. But to further optimize radiotherapy, UMC Utrecht collaborated with leading companies in both clinical imaging and radiotherapy, Philips and Elekta, to develop a machine called MR LINAC, that combines MRI and radiotherapy in one handy machine.

This machine could dramatically improve radiotherapy’s efficacy. It would mean that clinicians could see the tumor at the time of irradiation, and the beam of radiation would be more focused. This enables a higher dose, leading to both improved healing and less surgical treatments. Using MRI also means that recordings could be made throughout the duration of the treatment – like making a movie of the tumor.

MR LINAC would ultimately be a combination of an MRI machine and an accelerator. Design of the machine began in 2004, the first prototype was created in 2009, and I saw the clinical-grade prototype on my visit. (Unfortunately I can’t provide any pictures because the machine was on, and would have destroyed my cell phone.) The clinical prototype is expected to be built some time next year. 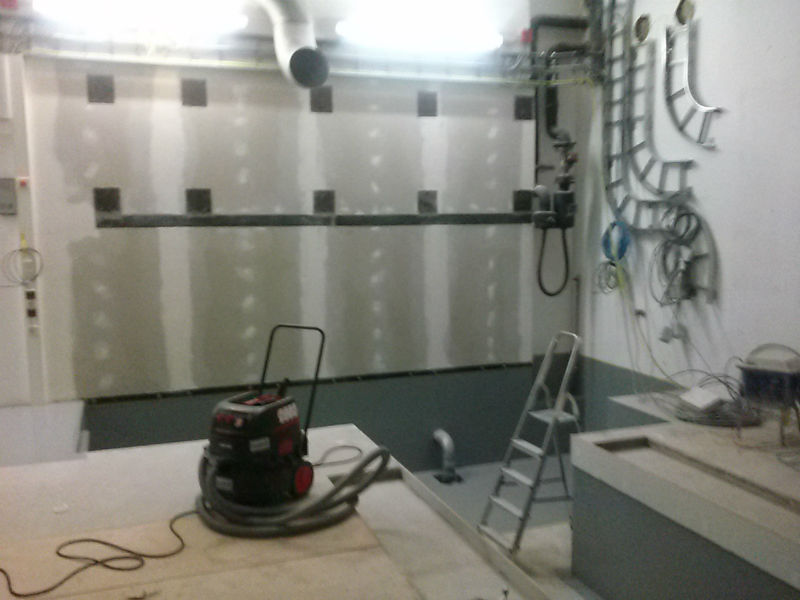 And it will live in this room.

The system is an accelerator, which spins around the MRI machine. Once the exact position of the tumor has been located, the accelerator shoots its beam of radiation through the MRI to treat the patient. (I’m hoping this works by a couple of panels shifting aside and a “ray gun” emerges to irradiate the patient, like some futuristic weapon.) It’s not quite clinic ready yet – before clinical use a specific set of procedures has to be developed, because nothing like this has existed before. Clinical tests will be performed in major medical centers around the world.

Once MR LINAC comes to fruition, radiotherapy will become a much more effective treatment. It will provide better local tumor control, make for less invasive surgery (potentially none at all) permit higher doses of radiation, and expose the patient to less toxicity overall. Hopefully, it will also help to succeed where normal radiotherapy fails, like in the aforementioned esophageal and kidney cancers.