A team of engineers at the University of California San Diego has developed a magnetic ink that can be used to make self-healing batteries, electrochemical sensors and wearable, textile-based electrical circuits.

The key ingredient for the ink is microparticles oriented in a certain configuration by a magnetic field. Because of the way they’re oriented, particles on both sides of a tear are magnetically attracted to one another, causing a device printed with the ink to heal itself. The devices repair tears as wide as 3 millimeters–a record in the field of self-healing systems.

Researchers detail their findings in the Nov. 2 issue of Science Advances. 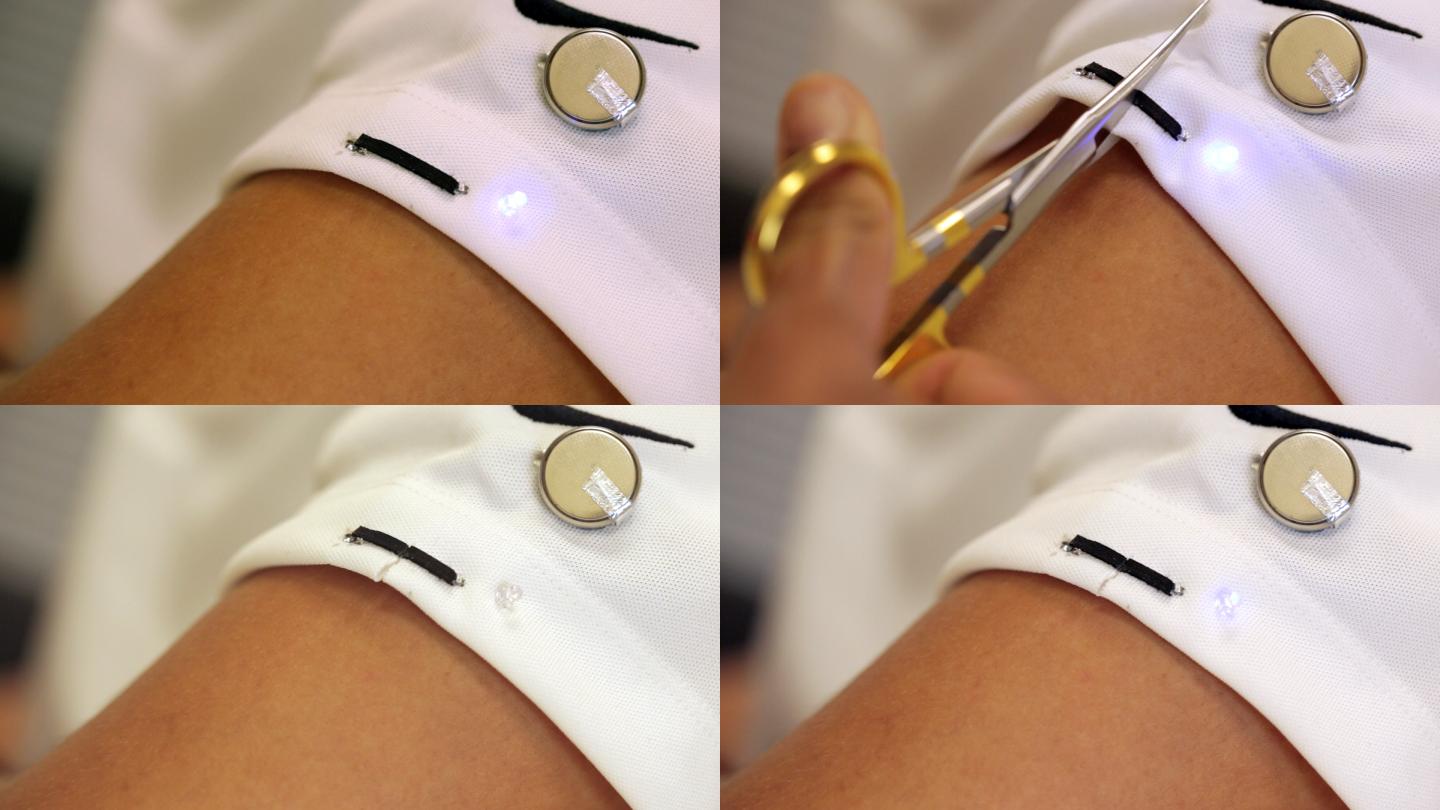 Nanoengineers printed a self-healing circuit on the sleeve of a T-shirt and connected it with an LED light and a coin battery. The researchers then cut the circuit and the fabric it was printed on. At that point, the LED turned off. But then within a few seconds it started turning back on as the two sides of the circuit came together again and healed themselves, restoring conductivity. (Credit: Jacobs School of Engineering/UC San Diego).

Existing self-healing materials require an external trigger to kick start the healing process. They also take anywhere between a few minutes to several days to work. By contrast, the system developed by Wang and colleagues doesn’t require any outside catalyst to work. Damage is repaired within about 50 milliseconds (0.05 seconds).

Engineers used the ink to print batteries, electrochemical sensors and wearable, textile-based electrical circuits (see video). They then set about damaging these devices by cutting them and pulling them apart to create increasingly wide gaps. Researchers repeatedly damaged the devices nine times at the same location. They also inflicted damage in four different places on the same device. The devices still healed themselves and recovered their function while losing a minimum amount of conductivity.

For example, nanoengineers printed a self-healing circuit on the sleeve of a T-shirt and connected it with an LED light and a coin battery. The researchers then cut the circuit and the fabric it was printed on. At that point, the LED turned off. But then within a few seconds it started turning back on as the two sides of the circuit came together again and healed themselves, restoring conductivity.

“We wanted to develop a smart system with impressive self-healing abilities with easy-to-find, inexpensive materials,” said Amay Bandodkar, one of the papers’ first authors, who earned his Ph.D. in Wang’s lab and is now a postdoctoral researcher at Northwestern University.

Wang’s research group is a leader in the field of printed wearable sensors, so his team of nanoengineers naturally turned to ink as a starting point for their self-healing system.

Engineers loaded the ink with microparticles made of a type of magnet commonly used in research and made of neodymium, a soft, silvery metal. The particles’ magnetic field is much larger than their individual size. This is the key to the ink’s self-healing properties because the attraction between the particles leads to closing tears that are millimeters wide.

The particles also conduct electricity and are inexpensive. But they have poor electrochemical properties, making them difficult to use in the electrochemical devices, such as sensors, on their own. To remedy this problem, researchers added carbon black to the ink, a material commonly used to make batteries and sensors.

But researchers realized that the microparticles’ magnetic fields, when in their natural configuration, canceled each other out, which robbed them of their healing properties. Engineers solved this by printing the ink in the presence of an external magnetic field, which ensured that the particles oriented themselves to behave as a permanent magnet with two opposite poles at the end of each printed device. When the device is cut in two, the two damaged pieces act as different magnets that attract each other and self-heal.

In the future, engineers envision making different inks with different ingredients for a wide range of applications. In addition, they plan to develop computer simulations to test different self-healing ink recipes in silico before trying them out in the lab.