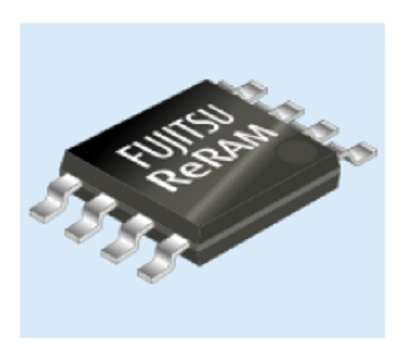 The MB85AS4MT is an SPI-interface ReRAM product that operates with a wide range of power supply voltage, from 1.65V to 3.6V. It features an extremely small average current in read operations of 0.2mA at a maximum operating frequency of 5MHz.

Up to this point, Fujitsu Semiconductor has contributed to resolving issues for clients with a need for specifications with greater performance than conventional non-volatile memory, such as EEPROM and serial flash memory, by providing FRAM products, which have such features as high read/write endurance and low power consumption. By adding the new 4 Mbit ReRAM MB85AS4MT to its lineup, Fujitsu Semiconductor can now further expand the options it offers to meet the diversifying needs of its customers.

This product features the ability to operate with a wide range of power supply voltage, from 1.65V to 3.6V, can be operated at a maximum of 5MHz through an SPI interface, and uses extremely small average current during read operations (0.2mA operating at 5MHz). It offers the industry’s lowest power consumption for read operations in non-volatile memory.

The package is a 209mil 8 pin small outline package (SOP), pin-compatible with other non-volatile memory products such as EEPROM. Fujitsu Semiconductor has mounted a 4 Mbit memory density, exceeding the maximum density of serial interface EEPROM, in a miniature 8-pin SOP package size.

Fujitsu Semiconductor expects that the MB85AS4MT, featuring high density and low power consumption, will be used in battery-operated wearable devices, medical devices such as hearing aids, and IoT devices such as meters and sensors.

Going forward, Fujitsu Semiconductor will continue to provide products and solutions aimed at improving the value and convenience of customers’ applications.