In recent years, patients with pulmonary emphysema have been increasing mainly among middle-aged and elderly males due to aging and excessive smoking. Emphysema makes brittle lungs, and in severe cases, holes develop in the lung tissue, causing air leakage. Researchers at NIMS developed a new sealant to close holes developed in lungs and blood vessels using Alaska pollock gelatin. In the paper published in the Journal of Biomedical Nanotechnology, they reported that the sealant is about 12 times stronger than conventional sealants and is able to resist pressure as high as approximately 2.8 times the normal blood pressure.

Furthermore, the researchers explain that the advantage of the sealant is its property of remaining liquid at room temperature as it contains gelatin extracted from Alaska pollock, which is a cold-water fish. “The sealant doesn’t have to be preheated before surgery, and it can be sprayed directly on an open wound after mixing it with a crosslinking agent. Because it possesses extremely high bonding strength and elasticity, and it slowly breaks down in the body after surgery, it has the potential to be used as a sealant for any organ.”

Currently, fibrin sealants, which contain blood-derived components, are mostly used as supplementary materials to seal holes developed in blood vessels and organs. However, their bonding strengths are lower than normal blood pressure and thus are inadequate, and their wet tissue adhesion is particularly weak. 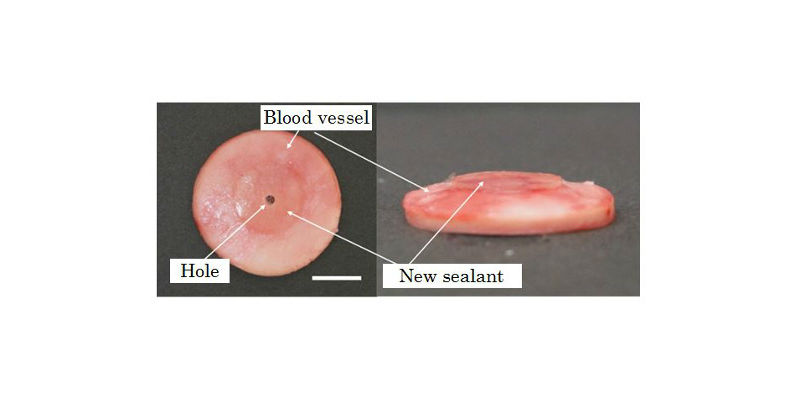 The newly developed sealant that was applied over a 3-mm-diameter hole in a porcine blood vessel.

To resolve this issue, the research group led by Tetsushi Taguchi, who belongs to the MANA (International Center for Materials Nanoarchitectonics) Biomaterials Unit, had been developing a sealant using pig-derived gelatin. Taguchi explains that the key approach to increasing sealants’ bonding strength is the creation and use of hydrophobically-modified gelatin. “When gelatin is chemically modified with hydrophobic group, the hydrophobic group partially penetrates tissue in the manner in which a ship anchors itself to the seabed. Consequently, the use of hydrophobically-modified gelatin will improve sealants’ adhesion to biological tissues.” However, sealants using pig-derived gelatin still had a disadvantage: they need to be liquefied by heating before their use in surgery operation, since they become gelatinous when they are exposed to low temperatures or condensed.

To deal with this issue, Taguchi shifted his attention to Alaska pollock gelatin as it maintains liquidity even when it is exposed to low temperatures or condensed. “Because Alaska pollock is cold-water fish, Alaska pollock gelatin transforms between solid and liquid states at 13.8°C. In other words, this gelatin always takes a liquid form at room temperature. We have developed a new sealant by chemically modifying this gelatin with a hydrophobic cholesteryl group, which was considered to be an excellent tissue sealant, and mixing it with a polyethylene glycol-based crosslinking agent, which had already been in clinical use.” To verify the bonding strength of this new sealant, his team made 3-mm-diameter holes in fresh porcine blood vessels under wet conditions and applied the sealant to the holes. The test demonstrated that the pressure resistance strength of the sealant was 341 mmHg. This value indicates that the sealant is highly pressure resistant as it is about 12 times stronger than currently available fibrin sealants (29 mmHg), and the value is about 2.8 times greater than the normal maximum blood pressure for healthy people (approx. 120 mmHg). 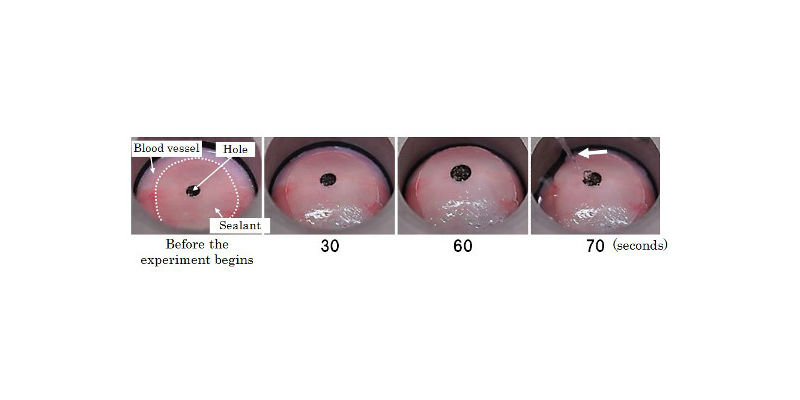 Observation of sealant applied over a hole that was created in a porcine blood vessel. After the application, saline was used to make the tissue swell. In this experiment, the commercially-available sealant applied burst only in a few seconds; in contrast, the sealant we developed maintained its integrity for 70 seconds (the arrow is pointing at saline vigorously coming out of the burst sealant). These results indicate that the new sealant was significantly stronger than the commercially-available sealant in terms of interfacial strength between the sealant and blood vessel.

This sealant is highly biocompatible given that it is digested by enzymes in the body within eight weeks. In addition, due to its high elasticity, it is expected to have high demand in various surgical and internal medicine fields such as cardiovascular surgery and the treatment of pulmonary emphysema.

Taguchi is currently collecting basic data with the goal of conducting clinical studies in five years in coordination with the Department of Thorasic Surgery, University of Tsukuba. He says, “We wish to make contribution to medical advancement by developing outstanding materials for medical workers. To achieve that, we need to know the real needs and concerns of medical workers. Without taking this information into account, our efforts to integrate advanced science and technology into the development of new materials would be wasted. To ensure our effort to be productive and to develop truly useful materials, it is vital for us to listen to the opinions of medical workers in person.”