According to Daatrics, “Neebo’s vitals are within 1% accuracy difference of medical grade systems; thus, it’s the most accurate consumer infant monitoring system available on the market today.” 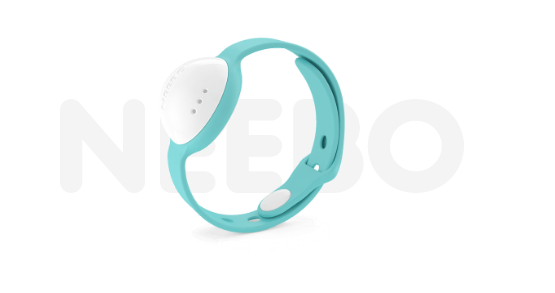 Built with a BPA free medical grade plastic and a silicone band, Neebo is designed with a 21mm by 29mm egg-shaped design. The device is small enough to fit the wrist of a newborn baby- specifically, the area that best measures vital signs.

The band has a childproof lock so that only an adult can remove it.

The monitor is Wi-Fi/ Bluetooth powered and includes a three-stage alert system, notifying parents of emergencies such as early detection of heart disease, respiratory, immunity problems, and other medical scenarios. To monitor the baby’s surrounding environment, Neebo blocks out background noise such as cars and pets, allowing parents to only hear their baby. However, parents will be alerted of unusual noises.

Parents will also be able to monitor when their baby is asleep and be aware of their baby’s state when left with a nanny or babysitter.

The device is charged using standard wireless technology, similar to an Apple Watch.

Neebo is both iOS and Android compatible.