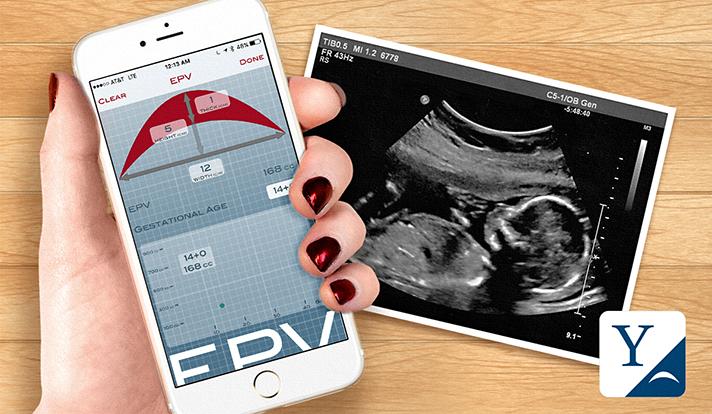 One of the greatest joys for parents is the birth of their child — and one of the greatest tragedies is the loss of that child. Now, Yale physician scientist Harvey J. Kliman, M.D., has developed an iPhone app that helps women contribute to research that aims to decrease the chance of pregnancy loss due to an undersized placenta, the fetal organ that provides nourishment to the fetus.

Kliman’s research seeks to determine whether estimated placental volume (EPV) measurements can be used to predict pregnancy outcome and, if so, to generate sufficient data to convince healthcare providers who care for pregnant women to incorporate EPV measurements into their routine prenatal care.

Kliman and his colleagues developed the EPV ResearchKit app to study the issue after they noted that many late-term pregnancy losses were linked to very small placentas. Kliman theorized that the proper growth of the placenta is important and could be monitored in the same way that an obstetrician uses ultrasounds to follow the growth of the fetus, or a pediatrician weighs and measures children to ensure they are growing normally.

The app, which uses ResearchKit, an open source software framework designed by Apple, empowers women to contribute to Kliman’s EPV research — the results of which ultimately may be used to help decrease the chance of a pregnancy loss.

“Until now, there has been no easy way to determine how much ‘gas’ is left in the placenta’s tank,” said Kliman, research scientist in obstetrics, gynecology, and reproductive sciences; and director of the Reproductive and Placental Research Unit at Yale School of Medicine.

Kliman has authored previous publications about the mathematical modeling behind the EPV equation and how it was developed to estimate placental weight using three simple ultrasound measurements that can be taken during a routine examination performed by the patient’s healthcare provider. He also has investigated whether EPV values may be normal or abnormal from studies of several hundred pregnant women.

“ResearchKit has given me the opportunity to reach thousands of women who can contribute to our understanding of placental volume and pregnancy outcome in a way I never could have done on my own,” said Kliman. “My hope is that the effort these research participants put into this project will help women achieve the healthiest pregnancy outcomes possible.”