It’s a problem as old and as aggravating as eye drops themselves: As soon as the medicine goes in, almost all of it washes right back out again.

Now, McMaster chemical engineer Heather Sheardown and the graduate students in her lab have developed a better way to deliver medicine to the surface of the eye.

They have created microscopic packets of medicine that lodge themselves imperceptibly in the base of the tear film that makes up the wet surface of the eye.

There, the molecular packets, or depots, dissolve gradually, releasing medicine slowly and making it possible for people with conditions such as dry eye and glaucoma – which require daily drops – to receive the same degree of treatment from using drops just once a week. 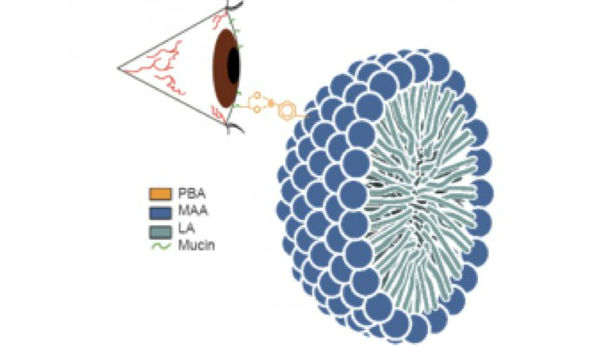 Sheardown, a Canada Research Chair in Ophthalmic Biomaterials and Scientific Director of the 20/20 NSERC Ophthalmic Materials Research Network, says that partners in the field had named the problem with conventional eye drops as one of the top issues in all of eye care.

The problem is that the eye does a good job of defending itself against foreign substances, making it difficult for the active ingredients in eye drops to do their work before the eye sheds them.

With conventional drops, 95 per cent of the medicine is typically lost before it has a chance to work, a frustrating inefficiency, especially for patients.

“It’s a lousy delivery system,” Sheardown says. “If you can deliver drops to the front of the eye at lower concentrations that work over a longer period, it could be huge.”

Sheardown’s team is in the final stages of proving the safety and effectiveness of the new technology, which was described recently in the journal Biomacromolecules. The research was funded by the 20/20 NSERC Ophthalmic Materials Research Network and The Boris Family Foundation.

Sheardown is presenting the new technology to the Tear Film and Ocular Surface Society in France in September.

She says there has been interest in commercializing the technology, and she hopes it will be on the market in the near future.