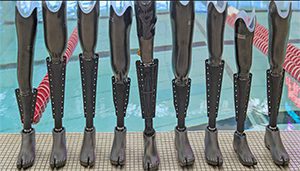 A New York State heathcare provider has developed a 3D-printed artificial leg to help combat veterans and other amputees to swim again.

Northwell Health’s  prosthetic, “The Fin,” is the first such prosthetic leg attachment to give amputee swimmers the ability to navigate from land to the water and back without having to switch prosthetics.  Northwell has begun a study to gather data from up to 10 participants about the ease and efficiency of using The Fin in the water. It will then seek FDA approval to market the device.

A couple of study participants are already raving, according to a prepared statement from Northwell.

U.S. Marine Corps veteran Kevin Vaughan, 28, of Merrick, N.Y., lost his leg in 2011 when a bomb attack in Afghanistan forced doctors to amputate below the knee.  “Before the Marine Corps, I grew up at the beach and the pool, and that was hindered after my service,” he said.  “Now I can use this prosthetic to return to something I love to do, which is go the beach and swim.”

For 47-year-old Seamus Doherty of Manhattan, The Fin could mean spending more time with his water-loving seven-year-old son. A commanding officer of a detective squad in Brooklyn, Doherty lost his leg after a hit-and-run motorcycle accident nearly took his life.  “This prosthetic is the answer to my prayers in being able to spend more time with Seamus at the beach and truly being free to come and go in and out of the water,” he said.

“We made something that didn’t exist yet and solved a specific problem in a very spectacular way.  My hope is that this device creates unforeseen opportunities for amputees everywhere,” said Northwell Health researcher Todd Goldstein, who designed and developed the new amphibious prosthetic. “This study is the first step in making this innovative prosthetic available to the millions of amputees looking to return to the water.”

Northwell hopes to partner with the U.S. Department of Veterans Affairs to make The Fin more widely available.

“For amputees with a passion for swimming, there was no device out there that was truly amphibious and allowed them to really swim,” said Thomas Thornton, senior vice president of Northwell Ventures. “We hope to develop other customized solutions that will enable the estimated 1.9 million people who have lost a limb nationwide — a number that is expected to double by 2050 — to resume active lifestyles.”