When electrical waves in the heart run amok in a condition called arrhythmia, sudden death can occur. To save the life of a patient at risk, doctors currently implant a small defibrillator to sense the onset of arrhythmia and jolt the heart back to a normal rhythm. But a thorny question remains: How should doctors decide which patients truly need an invasive, costly electrical implant that is not without health risks of its own?

To address this, an interdisciplinary Johns Hopkins University team has developed a non-invasive 3D virtual heart assessment tool to help doctors determine whether a particular patient faces the highest risk of a life-threatening arrhythmia and would benefit most from a defibrillator implant. In a proof-of-concept study published May 10 in the online journal Nature Communications, the team reported that its new digital approach yielded more accurate predictions than the imprecise blood pumping measurement now used by most physicians. 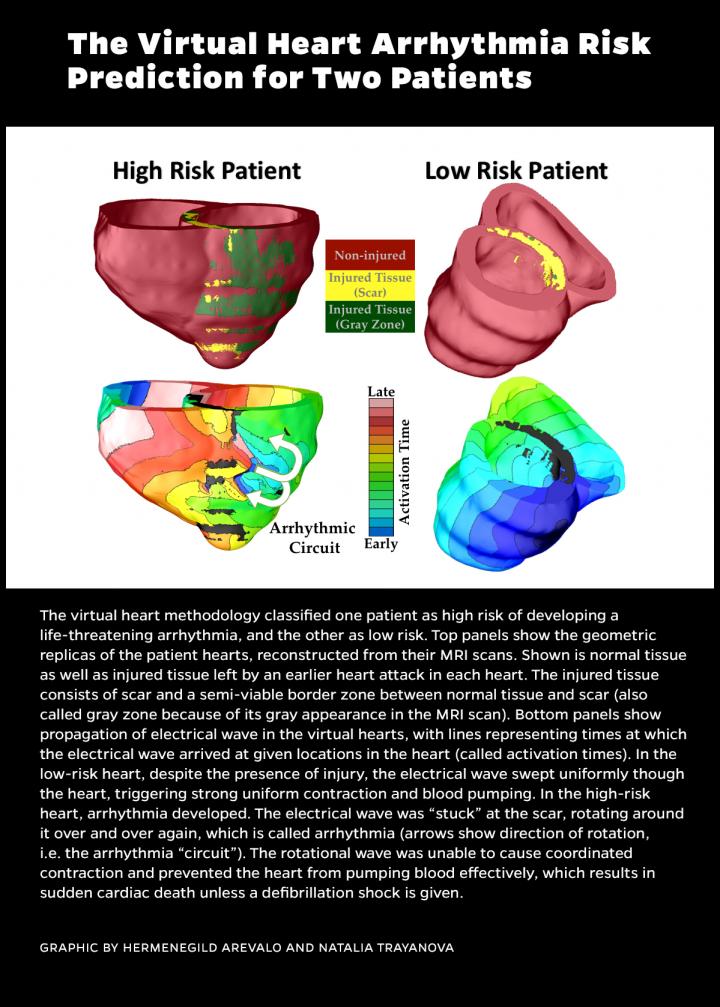 Examples of how the 3D computer model would classify one patient at high risk for heart arrhythmia and another at low risk. (Credit: Royce Faddis/JHU)

Trayanova, a pioneer in developing personalized imaging-based computer models of the heart, supervised the research and was senior author of the journal article. She holds faculty appointments within Johns Hopkins’ Whiting School of Engineering and its School of Medicine, and she is a core faculty member of the university’s Institute for Computational Medicine. For this study, she joined forces with cardiologist and co-author Katherine C. Wu, associate professor in the Johns Hopkins School of Medicine, whose research has focused on magnetic resonance imaging approaches to improving cardiovascular risk prediction.

For this landmark study, Trayanova’s team formed its predictions by using the distinctive magnetic resonance imaging (MRI) records of patients who had survived a heart attack but were left with damaged cardiac tissue that predisposes the heart to deadly arrhythmias. The research was a blinded study, meaning that the team members did not know until afterward how closely their forecasts matched what happened to the patients in real life. This study involved data from 41 patients who had survived a heart attack and had an ejection fraction–a measure of how much blood is being pumped out of the heart–of less than 35 percent.

To protect against future arrhythmias, physicians typically recommend implantable defibrillators for all patients in this range, and all 41 patients in the study received the implants because of their ejection fraction scores. But research has concluded that this score is a flawed measure for predicting which patients face a high risk of sudden cardiac death.

The Johns Hopkins team invented an alternative to these scores by using pre-implant MRI scans of the recipients’ hearts to build patient-specific digital replicas of the organs. Using computer-modeling techniques developed in Trayanova’s lab, the geometrical replica of each patient’s heart was brought to life by incorporating representations of the electrical processes in the cardiac cells and the communication among cells. In some cases, the virtual heart developed an arrhythmia, and in others it did not. The result, a non-invasive way to gauge the risk of sudden cardiac death due to arrhythmia, was dubbed VARP, short for virtual-heart arrhythmia risk predictor. The method allowed the researchers to factor in the geometry of the patient’s heart, the way electrical waves move through it and the impact of scar tissue left by the earlier heart attack.

Eventually, the VARP results were compared to the defibrillator recipients’ post-implantation records to determine how well the technology predicted which patients would experience the life-threatening arrhythmias that were detected and halted by their implanted devices. Patients who tested positive for arrhythmia risk by VARP were four times more likely to develop arrhythmia than those who tested negative. Furthermore, VARP predicted arrhythmia occurrence in patients four-to-five times better than the ejection fraction and other existing clinical risk predictors, both non-invasive and invasive.

“We demonstrated that VARP is better than any other arrhythmia prediction method that is out there,” Trayanova said. “By accurately predicting which patients are at risk of sudden cardiac death, the VARP approach will provide the doctors with a tool to identify those patients who truly need the costly implantable device, and those for whom the device would not provide any life-saving benefits.”

Wu agreed that these encouraging early results indicate that the more nuanced VARP technique could be a useful alternative to the one-size-fits-all ejection fraction score.

“This is a ground-breaking proof-of-concept study for several reasons,” Wu said, “As cardiologists, we obtain copious amounts of data about patients, particularly high-tech imaging data, but ultimately we use little of that information for individualized care. With the technique used in this study, we were able to create a personalized, highly detailed virtual 3D heart, based on the patient’s specific anatomy. Then, we were able to test the heart virtually to see how irritable it is under certain situations. We could do all this without requiring the patient to undergo an invasive procedure. This represents a safer, more comprehensive and individualized approach to sudden cardiac death risk assessment.”

Wu pointed out that an implantable defibrillator also has a few risks of its own and that avoiding implantation of this device when it is not truly needed eliminates these risks. Implantable defibrillators, she said, require invasive access to the heart, frequent device checks and intermittent battery changes. Complications, she added, can include infection, device malfunction and, in rare instances, heart or blood vessel damage.

In addition to eliminating unnecessary device implantations, Trayanova noted that this new risk prediction methodology could also be applied to patients who had prior heart damage, but whose ejection fraction score did not target them for therapy under current clinical recommendations. Thus, Trayanova said, VARP has the potential to save the lives of a much larger number of at-risk patients.

With the proof-of-concept study completed, the researchers next hope to conduct further tests involving larger groups of heart patients. The VARP technique is covered by patent protection obtained through the Johns Hopkins Technology Ventures office.