Integrating UVC LEDs into a UVGI system, instead of mercury lamps, allows for continuous disinfection without causing harm to a patient. As standards look to reduce HAIs, LEDs will quite possibly become the light source of choice.

Infection control is a major focus in healthcare, owing to its enormous, worldwide financial and social burden. One in every 25 patients will acquire an infection while hospitalized. In fact, hospital-acquired infection (HAI) is the most common hospital complication, resulting in billions in excess healthcare costs. In 2014, the infection control market was estimated at $13.1 billion, including chemical and physical equipment solutions. The disinfection and sterilization equipment market, a $3.1 billion segment, has the highest growth rate, supported by an objective of the Affordable Care Act to promote quality improvement and encourage innovation in the field of HAI prevention.

Historically, hospitals were paid regardless of the reason for service, with no monetary pressure to improve quality. Today, public and private health plans are moving to change payment structures to reward better outcomes instead of mere service volume. This is driving innovation in HAI prevention technology, including disinfection of air and surfaces using ultraviolet light.

Methods for delivering UV disinfection
Ultraviolet germicidal irradiation (UVGI) is one of the techniques that can be used to reduce airborne pathogens in healthcare environments. With this technique, light in the 250nm to 280nm wavelength range (also referred to as the UVC range) disrupts the DNA of harmful microorganisms and renders them unable to reproduce, eliminating the spread of infection. UVGI is primarily delivered with three systems: Portable, in-duct and upper-room.

Portable UVGI units are used in patient, surgical and ICU rooms, and other critical-care settings. Mobile units use high-power, pulsed UV light for intense intermittent room cleansing between patient stays or procedures, while portable in-room air purifiers equipped with UV are used for continuous air treatment in high-risk areas. This allows facilities to bring disinfection to the patients and locations that need it most.

Stationary UVGI disinfection can take the form of either in-duct systems for airstream disinfection or upper-room installations to prevent infection transmission within a room. Unlike the portable units, both types of built-in systems are capable of treating large air volumes. In-duct UVGI centralizes disinfection using mercury lamps to treat air as it circulates through the building. Guidelines from standards committees such as ASHRAE define optimal lamp placement within an air handling unit or duct to optimize disinfection. These units are practical for preventing infections that are primarily recirculated within buildings, such as sick building syndrome.

Upper-room UVGI units eliminate airborne pathogens within a room and are especially advantageous when the source of infection is localized. This solution is effective in preventing the spread of influenza, SARs, TB and other airborne illnesses. In fact, this method of disinfection has been found to reduce rates of infection by 80 percent in controlled mammalian laboratory experiments published by Ed Nardell, Associate Professor of Medicine at Harvard Medical School.

UVC LEDs: Redefining UVGI systems
Light-emitting diodes that put out UVC light are an emerging alternative for all three types of UVGI systems. Traditional UVGI systems use low-pressure mercury lamps, which emit at 253.7nm as a line source. Despite this particular wavelength not being ideal from a germicidal efficiency standpoint, the lamps have become an industry standard because they are easily accessible. With the introduction of UVC LEDs, emission of the light can be tailored to the action spectrum of pathogens – reported between 265nm and 267nm. There can be some variation in wavelength susceptibility between bacterial and viral strains, usually depending on the cell wall characteristics. The wavelength specificity of LEDs makes them beneficial to systems created for a specific target, such as SARS or TB. 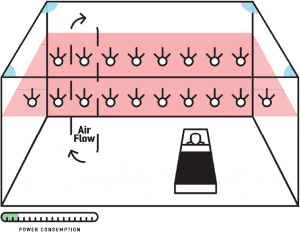 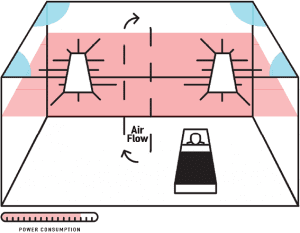 In traditional mercury lamp-based upper-room UVGI systems, the lamps are left on continuously in occupied rooms and congregate settings. Prolonged exposure to UVC wavelengths can cause eye and skin damage, so the use of these systems requires the integration of safety measures to protect occupants. These include directing almost all of the UV light above eye level via reflectance baffles integrated into the lighting fixtures. Such baffles have an unintended consequence of reducing lamp efficiency. New solutions using UVC LEDs provide increased design flexibility and safety for room occupants while being an inherently unidirectional and efficient light source. This means that manufacturers can control the emission path away from occupants, without requiring additional baffles to redirect light allowing for continuous disinfection without causing harm. The compact nature of UVC LEDs also allows for more uniform disinfection in a room – regardless of shape or size. Traditional fixtures are constrained in design due to the lamps’ long tube housing. Such fixtures are placed in corners or along the walls of a room for optimum UV radiant distribution. But hot spots and cold spots are typical, as seen in the image at left, especially in irregularly shaped rooms. Conversely, the compact nature of UVC LEDs allow them to be placed in a grid-like pattern to accommodate room shape for maximum uniformity, providing an overall more efficient germicidal system. An example of the two different optical patterns possible with the same set of UVC LEDs is shown in the image above.

Localized surface disinfection with UVC LEDs
The design flexibility of UVC LEDs can also be leveraged for small-scale surface disinfection, particularly for irregularly shaped surfaces. The compact nature of UVC LEDs allows the sterilization unit to take the shape of the disinfection target. Understanding the size of the surface, distance from the light source, and dosage requirements provide direction for the system designer. The images below show two examples of localized surface sterilization targets – a cylindrical vial and a small workstation. As UV disinfection is line-of-sight irradiation, the flexibility of the LED allows for a uniform dispersion of light across the entire surface. 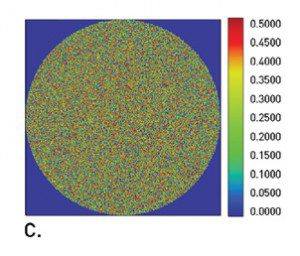 In the first example, a cylindrical vial requires a dosage of 5mJ/cm2. When performing the simulation, the designer must consider the power and time required to achieve this dosage at the furthest point from the LED array – the base of the vial, which is 81mm from the light source. The irradiation would be higher on the sidewalls closer to the top of the vial, so achieving the minimum dosage at the base would ensure the entire vial surface is disinfected. According to the model, the arrangement shown will achieve the required dosage after 10 seconds of exposure.

The second example shows the disinfection of a workspace surface 100mm wide (about 4 in.), requiring a dosage of 12mJ/cm2. To achieve this, the lights are arranged in a 100mm-wide strip of four UVC LEDs set approximately 25 mm above the surface. To achieve a uniform dispersion with the 100° viewing angle of the LEDs, they must be placed 25mm apart in the array. The target dosage in this application can be achieved by irradiating the surface for 60 seconds. Arrangement for surface disinfecting bar that can move along the axis (A) and radiation pattern from the LED on to a surface in stationary mode (B). 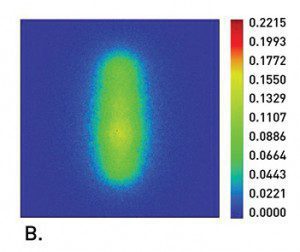 The ability to arrange the LEDs to accommodate the surface allows designers to achieve uniformity while making the most efficient use of the light source. This allows disinfection of more high-contact surfaces – further reducing the risk of HAI for patients.

In addition to overall effectiveness, systems integrating UVC LEDs provide other advantages, including environmental friendliness, less-complex electronic systems, and compact design. These advantages offer tremendous design freedom and flexibility for mobile and stationary systems alike. As LEDs become the light source of choice, these systems will be reimagined and redefined to address the growing concern around HAIs and improved outcomes in healthcare facilities and congregate settings. 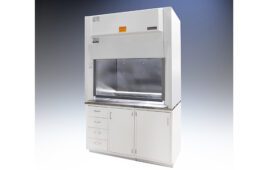 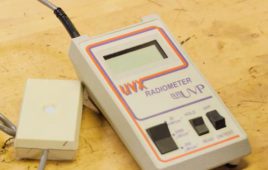 When it comes to germicidal lights bought online, buyer beware 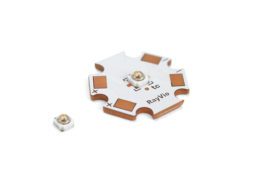