For a non-descript box it wields a mighty name and even more impressive possibilities for people with heart disease. Called the AngioDefender, the machine – no bigger than a shoebox – holds much promise in the ability to personalize cardiac care, say researchers at Lawson Health Research Institute, the research arm of St. Joseph’s Health Care London.

St. Joseph’s Hospital in London is the only Canadian cardiac rehabilitation centre testing the AngioDefender, a non-invasive tool that can assess the health of blood vessels by using a simple blood pressure cuff. At the recent Canadian Cardiovascular Congress in Toronto, Lawson researchers presented findings of their research study, which assessed the feasibility and reliability of the AngioDefender in patients undergoing cardiac rehabilitation.

“It’s very exciting,” says Dr. Neville Suskin, Lawson scientist and medical director of St. Joseph’s Cardiac Rehabilitation and Secondary Prevention Program. “Right now everyone basically gets similar treatment in terms of maximizing therapy based on risk factor profiles. With this machine, if it does what we hope it will do, it gives us insight into a person’s vascular health so that we can know if the treatment is working and adjust and individualize their care.”

Also key, says Dr. Suskin, is the machine can be used by any medical professional in any doctor’s office.

Using a specially designed data analysis algorithm, the AngioDefender system produces each patient’s “flow-mediated dilation” score. When the information is combined with the patient’s other risk factors, it calculates the patient’s vascular age. The whole process takes 15 to 20 minutes. 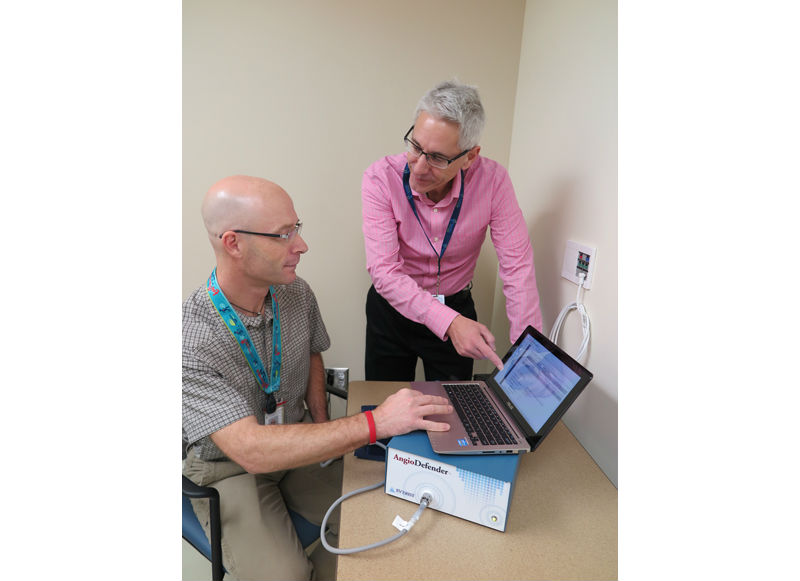 Dr. Neville Suskin, right, medical director of the Cardiac Rehabilitation and Secondary Prevention Program and a Lawson Health Research Institute scientist, and Tim Harley, research coordinator for the program, have been part of a key trial of the AngioDefender, a novel device that holds much promise in the ability to personal cardiac care.

“The ability for a health professional to obtain a measure of vascular health in such a straightforward manner is very novel” says Dr. Suskin. “The gold-standard tool to measure flow mediated dilatation is ultrasound but this is not regularly used in clinical practice because it takes a substantial expertise to operate. It’s not practical in a broad clinical setting so we have not been able to obtain this measure clinically.”

The Lawson study involved 26 patients who had their vascular health assessed before beginning cardiac rehabilitation and then after completing the six-month program. Among them was Bob Hughes, 77, of London, who had double bypass surgery in September 2014. During his recovery,Bob, a competitive tennis player who is used to being active, has struggled with debilitating side effects from heart medications.

“I’m for anything that can help customize medicine and make it easier and faster to administer tests,” says Bob. “The trial was another chance to check how I’m doing.”

Dr. Suskin and his team found that the machine is feasible to use in a busy cardiac rehabilitation practice setting. “It doesn’t take long, patients tolerate it, and they are also very keen to know their vascular health as determined by this machine.” 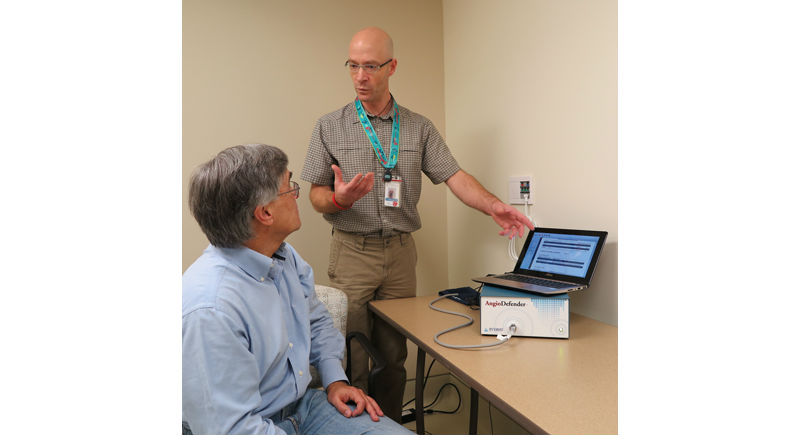 Already found in other studies to be is statistically equivalent to the gold standard ultrasound technique to measure the health of the endothelium, St. Joseph’s is now one of five sites – once again the only Canadian site – taking part in testing the AngioDefender for Food and Drug Administration approval in the United States. It has already been approved by Health Canada and has CE marking – a mandatory conformity marking for certain products sold within the European Economic Area.

If successful, the device may become part of the standard screening to assess early-stage cardiovascular disease and atherosclerosis, and an innovative way to monitor the effectiveness of treatment.

Abbott imaging catheter recall flagged as Class I by FDA